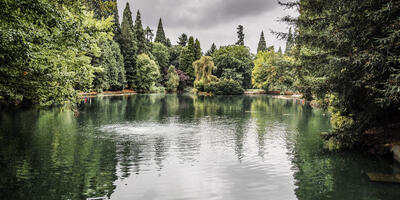 Take a virtual tour of the trees at Laurelhurst Park

A tiny green plant, called Duckweed. Duckweed is a plant native to the region and is a great source of food for fish and birds. It's not harmful to humans or pets. However, it has thrived in this pond. Portland Parks & Recreation will be monitoring the plant in order to bring a better balance to the ecology of the pond over the coming year.

The dog off-leash area in this park has been "adopted" by the Friends of Laurelhurst OLA. To volunteer at your neighborhood park, call 503-823-5121.

In 1909, the land that is now Laurelhurst Park was purchased from the estate of William S. Ladd, who developed Ladd's Addition and twice was mayor of Portland. Ladd named his 486-acre parcel Hazel Fern Farm, after the name of one of the streets in the area. Here Ladd developed one of the most prestigious stock farms in the West. In fact, his purebred Jersey cattle probably laid the foundation for Oregon's future livestock industry. As East Portland developed, Ladd's tract of land became too valuable for agricultural use. Ladd sold his land for over $1,000,000 to the Laurelhurst Company around the turn of the century.

A spring-fed pond on the property had always been a favorite watering hole for cattle, as well as a favorite swimming hole for both children and adults. In 1911, seeing the potential for a park as part of the Olmsted Plan, the City of Portland bought 30 of the acres, including the pond.

In 1912, Emanuel Mische, Portland's park superintendent from 1908-1914, designed the park based on his experience as the longtime horticultural expert for the Olmsted Brothers landscape architecture firm. Inspired by the Olmstedian 'natural' landscaping approach, his plan included several distinct sections - the concert grove, Firwood Lake, children's lawn, plateau and broad meadows, picnic grove, and Rhododendron Hill. Workers were hired to deepen the pond into a 3-acre lake. A 'play park' was developed between Oak and Stark Streets. The boys were to play on the south side, the girls on the north side, and general games were to be held in the eastern block. The park's comfort station building was added in 1914 and a series of paths and sidewalks were lit by electric lights in 1915.

Laurelhurst Park is a perfect example of the City Beautiful Movement in landscaping. In 1919, the park was named the most beautiful park on the west coast by the Pacific Coast Parks Association. Thanks to the efforts of the Portland Historical Landmarks Commission, in February 2001 Laurelhurst Park was named to the National Register of Historic Places.

For years, the Rose Festival Queen's Coronation took place in the Laurelhurst Park pond on floating boats and decorated rafts. The event drew thousands of onlookers who were attracted to the music, dancing, and pageantry. In the 1950s, Easter Sunrise Services were held, drawing thousands of people. In the park's early years, the pond was patrolled by a white swan named General Pershing (for his militant attitude). He forbade anyone to approach the edge of the lakeshore. In later years a black-beaked, black-toed swan named Big Boy was lake marshall. A man, known only as Mr. Martinson, fed Big Boy every day for 15 years. Mr. Martinson taught Big Boy to nod his head and honk "Hello!"

Laurelhurst Park's ideal duck population is ten male/female pairs. In 1987, the normal duck population was at 120, with seasonal visitors sometimes boosting numbers over 200. PP&R wanted to reduce the duck population in order to clear up the murkiness from the lake water. An adopt-a-duck venture was unsuccessful because the company hired to catch the birds was unable to trick the birds into their traps.

In 1990, nearly 20,000 catfish, carp, and black crappie fish were stirring up sediment on the lake's bottom. In addition, the water was smelly because of the overcrowding. The Oregon Bass and Panfish Club tried to deplete the fish population to no avail. Today, thousands of fish still inhabit the lake, along with the ducks and turtles. 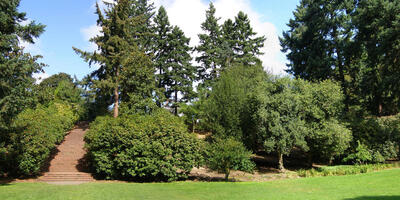