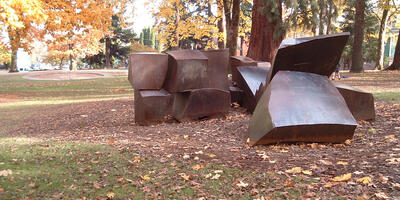 This park was given to the city by Multnomah County in 1927. The surrounding neighborhhod and the park were named after William Lair Hill (1838-1924), a pioneer attorney, historian, and newspaper editor who briefly owned the property in that area. Hill was responsible for codifying Oregon laws between 1882 and 1887.

Two buildings of historical interest are located in the park. The main building was constructed out of brick in 1918 in the Modified Georgian Revival style, with prominent brick quoining, gently arched windows with stone keystones, and dentils at the eave - and served as a dormitory for nurses working at the county hospital. In 1942, the State Architect's Office extensively remodeled it to serve as the Youth Administration of the Federal Security Agency. In 1949, the Park Bureau created a Junior Museum in the building, later renamed the Children's Museum, until it was relocated to the former OMSI building in Washington Park in 2001.

The smaller building, the Customs House, was built in 1921 as a branch of the county library. The building, Italian Renaissance Revival, is one of seven Carnegie-funded branch libraries in Portland. It was designed by Folger Johnson, of Johnson & Wallwork, who designed four of the seven Portland Carnegie branches. The prominent arched windows and the curved entrance flanked by columns are typical of Italian Renaissance style. On the interior, a broken pediment appears below the circular window and Corinthian columns flank the wings. The library housed a collection of books in Yiddish, German, Polish, and Italian, as well as English before being converted to an art center by the Park Bureau in the early 1950s. Today the building is used as office space for PP&R staff.

At the west end of the park, a sculpture of metal boulders by local artist Bruce West represents a rock grotto that once stood in the park and provided a shady place where older men gathered on hot summer days to play chess. It was installed in 1978 and is entitled simply BW1.

SW 2nd Avenue and Woods Street
Portland, OR 97201
Get Directions