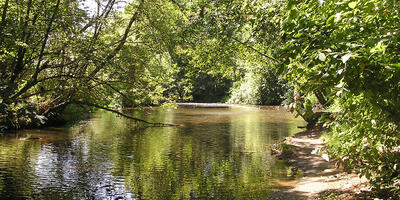 The Johnson Creek Watershed area was once the home of the Clackamas Indians, a subgroup of the Chinookan speakers who lived in the Columbia River Valley from Celilo Falls to the Pacific Ocean. When Lewis and Clark visited the area in 1806, the Clackamas tribe consisted of about 1,800 people living in 11 villages. Epidemics of smallpox, malaria, and measles reduced this population to 88 by 1851, and in 1855 the tribe signed a treaty surrendering its lands, including Johnson Creek.

By the middle of the 19th century, European American settlers had begun to remove vegetation, build sawmills, fell trees, fill wetlands, and farm along Johnson Creek. The creek is named for one of these newcomers, William Johnson, who in 1846 settled in what later became the Lents neighborhood and operated a water-powered sawmill. In early 1848 Lot Whitcomb, who would later found Milwaukie, filed a donation land claim and built a sawmill near the confluence of Johnson Creek and the Willamette River. In 1886, plans were made for train tracks along the creek. In 1903, the Springwater Division Line, also known as the Portland Traction Company Line, the Cazadero Line, and the Bellrose Line, was built along Johnson Creek to provide rail transport for passengers and freight. Sellwood, Eastmoreland, Lents, and Pleasant Valley were among the new communities that grew up along the line. By the 1920s, housing began to replace creekside farms, a trend that has continued.

SE 21st Avenue and Clatsop Street
Portland, OR 97202
Get Directions