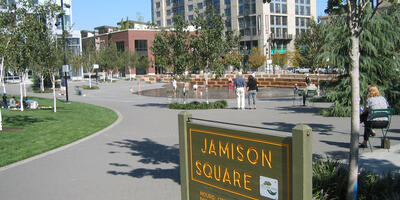 Updated August 3, 2021
Jamison Square Fountain is running! Our diligent mechanics and plumbers have fixed most of the issues, and while there is still a few things to correct, the fountain is ready for use!

From the beginning of the planning efforts for the Pearl District in the early 1990s, the creation of a network of open spaces was an important goal of both the neighborhood and the City. In 1998, a conceptual plan for the new parks and open spaces was proposed by the Tanner Creek & Water Feature Steering Committee and approved by City Council. Those recommendations served as a point of departure for planning the district's parks.

In June 1999, Peter Walker & Partners, a landscape architecture firm, was retained to provide concepts for three new parks between Tenth and Eleventh Avenues in the River District. They developed and refined plans for the parks with input from a Project Steering Committee and two public workshops. The final plan is characterized by a series of recurring elements that strengthen the connection between each of the three parks.

Located between NW Johnson and Kearney, Jamison Square was the first to be developed. It is named in honor of William Jamison, whose presence was pivotal in the development of the River District. He was an exceptional person in his ability to influence and connect with a wide variety of people. His personal magnetism, in addition to the size and scope of his art gallery, drew many people into the Pearl District.

The focal point of the park is a fountain which simulates a shallow tidal pool. Water cascades from stone joints into low pools as the fountain continuously recirculates treated water with energy-efficient pumps and motors. Along the edge of the park, are four 30-foot-tall sculptures covering the streetcar catenary poles; the Tikitotemoniki Totems, also known as Tiki Totems, were created by artist Kenny Scharf. Another art installation in the park is Contact II, the 1972 metal sculpture by Alexander Liberman that was donated to the City of Portland in 2002 by Ed Cauduro in memory of his parents.

In 2006 artist Mauricio Saldaña, commissioned by the Portland Pearl Rotary Club, created a red granite sculpture modeled after a brown bear. The bear's name is Rico Pasado, meaning "rich past," in reference to the history of the bears that once roamed this area as well as the Rotary International Centennial. This is why the sculpture is also referred to as the Centennial Bear.