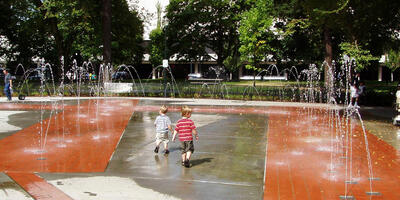 Located in inner NE Portland, adjacent to the Lloyd Center and TriMet MAX Line, Holladay Park is a forested gem within the city and a great location for large events in the 4.5-acre park.

To rent Holladay Park, please contact the Portland Parks & Recreation Customer Service Center at 503-823-2525. You may also visit our Online Reservation Center for details and availability.

This park is named after Benjamin Holladay (1819-1887), known to many as "a sharpster, a con man, and a rake." He stirred things up wherever he went and was a bit of a dandy, dressing like a riverboat gambler. He was said to be "wholly destitute of fixed principles of honesty, morality, or common decency." In 1868 Holladay sold his stagecoach business in California to Wells Fargo and moved to Portland to get involved in the railroad business. His goal was to build a rail line to California along the east side of the Willamette River. In order to do so, he spent a total of $55,000 in bribe money to help secure his company's endorsement. He also built two large hotels in the area where the park bearing his name is now located. Known as an extravagant spender, Holladay owned numerous mansions on both coasts and had overextended himself financially. He lost his railroad in 1876 and died in Portland in 1887.

Commissioned by the Lloyd Corporation and Pacific Power & Light in 1964, a concrete fountain featuring music and lights was installed in the park. Designed by Jack Stuhl, assisted by Ted Widing and Phillips Electrical, the musical fountain was favorite gathering place for park visitors. It was replaced in 2000, in conjunction with a major renovation of the park, by a spouting fountain designed by Tim Clemen and Murase Associates.

Three cast-bronze sculptures by artist Tad Savinar were added to the park as a percent-for-art project in 2000. Entitled Constellation, the project illustrates the connection between the personal front yard garden and the civic park garden through three distinct elements: a vase of cut flowers, an abstract molecule containing elements of a good neighborhood, and the figure of a home gardener, shears in hand. The objects in the molecule were selected by the Sullivan Gulch Neighborhood Association and the gardener was modeled after Carolyn Marks, a longtime neighborhood activist.

NE 11th Avenue and Holladay Street
Portland, OR 97232
Get Directions