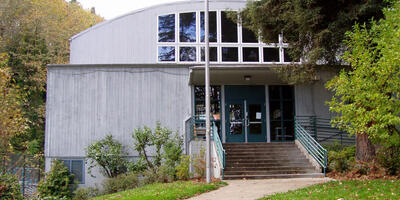 The Hillside Community Center facility is owned and maintained by Portland Parks & Recreation.
On this Page

The facility is available for lease and rental through Portland Parks & Recreation.

Designed in the mid-1940s by noted local architect Pietro Belluschi, the community center originated as the Catlin Gabel School. After the school moved, the Portland Art Association purchased the land and buildings in 1968 for use as an artists’ cooperative. In 1972, finding the property too costly to maintain, the Art Association decided to sell, and word spread throughout the community that the most likely buyer was a condominium developer. Since many of the homes in the area are situated on steep lots with no backyards, residents felt that the site would be better used as a park and community center. The problem, of course, was money.

A citizen’s organization, Citizens for Hillside Community & Recreation Center, Inc. (CHCRC), was formed for the purpose of preserving the property for a public park and community center. The CHCRC entered into an agreement with the Oregon Parks Foundation to help with the property acquisition and negotiated with the Art Association for a one-year option to purchase the land and buildings for $106,500.

In early 1973, the option was secured with a down payment of money raised by the neighborhood. After an exhaustive neighborhood fundraising effort generated additional monies, including contributions from private foundations and City Council, the community was still $25,000 short. To make up the difference, twelve families, sometimes referred to as the ‘Trembling Twelve,’ took out second mortgages on their homes to guarantee a loan of $25,000 from the Bank of California that finalized the purchase of the property. Over the next several years, the community continued to hold fundraising events to help the families pay off the second mortgages.

In the spring of 1974, the CHCRC, through the Oregon Parks Foundation, transferred the property over to the City of Portland, which accepted it as a public park and agreed to maintain the property and staff a community center. To create more open space, PP&R razed three of the four buildings on the property, keeping the gymnasium. Tennis courts, a soccer field, and a children’s play area were constructed to provide outdoor play spaces, and the gymnasium was remodeled with care taken to preserve the building’s exterior beauty.

The center was awarded a $75,000 grant in 2002 and a $75,000 grant in 2003 from the Northwest Neighborhoods Parks and Recreation Fund (I-405 Fund) of The Oregon Community Foundation. The grants were to be used to design and build a 580 sq ft multi-purpose room adjacent to the main building. However, in October 2003, the center experienced a fire that destroyed the kitchen and caused severe smoke damage throughout the rest of the building. Construction of the multi-purpose room was delayed until 2004, to coordinate that project with the repairs and clean-up needed on the main building.