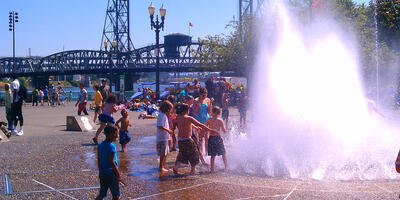 The Battleship Oregon Memorial was built in 1956 to honor an 1893 ship. It was nicknamed 'the Bulldog of the United States Navy' and fought in many famous battles before it was retired from service. On July 4, 1976, a time capsule was sealed in the base of the memorial. The time capsule is to be opened July 5, 2076.

Listen to a reading of the USS Oregon commemorative plaque located in Waterfront Park.

The Founders Stone honors Portland's founders, William Pettygrove and Asa Lovejoy, who tossed a coin to decide whether their new town would be named Boston or Portland.

Salmon Street Springs was dedicated in 1988, although it wasn't named until a contest was held in 1989. Designed by Robert Perron Landscape Architects and Planners, the fountain is controlled by an underground computer that changes the pattern of the fountain's 185 water jets. The three cycles of the fountain are called misters, bollards, and wedding cake. At full capacity, the fountain recycles 4,924 gallons of water per minute through as many as 137 jets at once.

On August 3, 1990, the Japanese American Historical Plaza was dedicated to the memory of those who were deported to inland internment camps during World War II. In the memorial garden, artwork tells the story of the Japanese people in the Northwest - of immigration, elderly immigrants, native-born Japanese Americans, soldiers who fought in US military services during the war, and the business people who worked hard and had hope for the children of the future. A sculpture by Jim Gion, Songs of Innocence, Songs of Experience, serves as a gateway to the plaza.

A non-profit organization, the Oregon Nikkei Endowment, fueled the commemoration with help from PP&R, Metropolitan Arts Commission, Portland Development Commission, and the Portland-Sapporo Sister City Association. Designed by award-winning landscape architect Robert Murase, the plaza is 70 feet wide at its narrowest, 200 feet at its widest. It extends between NW Davis & Naito Parkway (formerly Front Ave) and the Willamette River esplanade for about 300 feet northward from the Burnside Bridge. One hundred ornamental cherry trees link the plaza northward to the Friendship Circle, a collaboration by sculptor Lee Kelly and composer Michael Stirling. From a wide concrete circle rise a pair of 20-foot stainless towers from which emanates music based upon traditional and contemporary Japanese instruments. The sculpture commemorates 30 years of the Sister City relationship between Sapporo, Japan, and Portland.

In 1993, the Police Memorial, located at SW Jefferson near the Hawthorne Bridge, was dedicated to Portland police officers who had given their lives in the performance of their official duties.

Please note that there are several construction projects taking place within Waterfront Park, and directly next to the park along Naito Parkway – see map below and project descriptions. Follow links for more information. 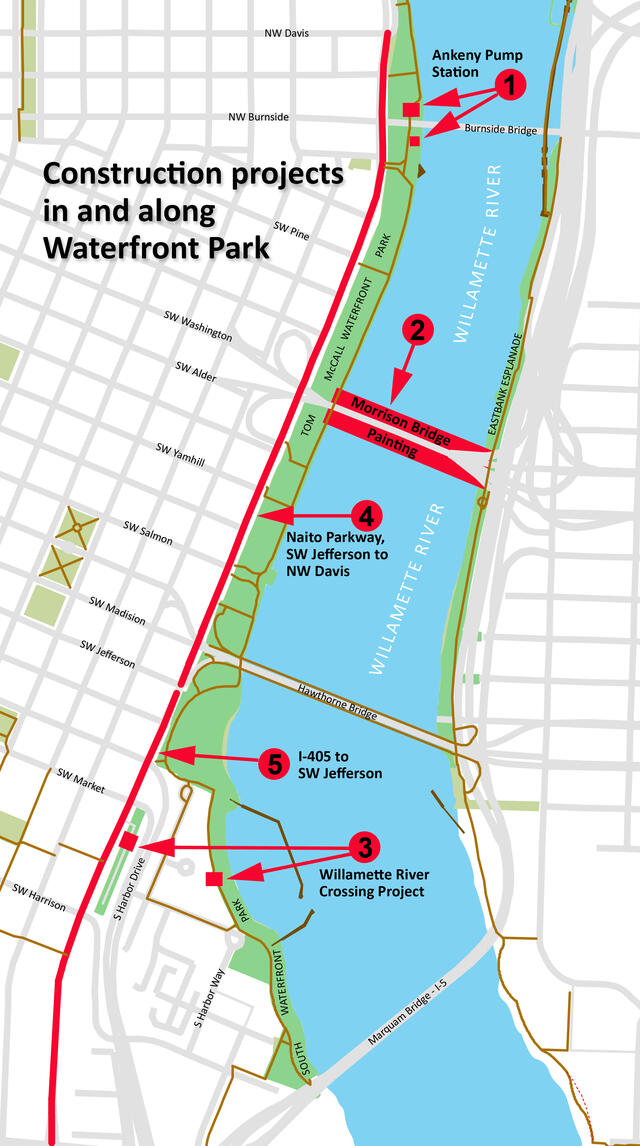 The idea for this park came at the turn of the century when the 1903 Olmsted Report pointed out the need not only for parks within the city, but for a greenway scheme for the riverbanks in order to ensure their preservation for future generations. The 1912 Bennett Plan again showed a need for more parks and river greenways, but instead of reorienting itself to the river, the city's focus was pulled further inland. In the late 1920s, the seawall was built along the Willamette's west bank for the protection of downtown from the annual floods. The seawall not only cut off the water from the people, but the people from the water as well. The construction of Harbor Drive along the west bank in the 1940s continued the trend of isolating the public from the river.

With the opening of the Eastbank Freeway (Marquam Bridge, I-5), Harbor Drive became less important to the traffic flow of the city. Governor Tom McCall created the Harbor Drive Task Force in 1968 in order to study proposals for creating a public open space in its place. In 1974, Harbor Drive was torn up and construction of a waterfront park began. It was completed and dedicated in 1978, gaining instant popularity. In 1984, the park was renamed Governor Tom McCall Waterfront Park.