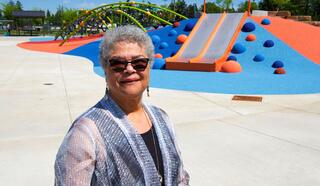 With Lynchview Park already slated for improvements funded by the Bond and System Development Charges, it was only fitting that the park’s name also be updated to one that is more welcoming and embodies the spirit of its community. That name is Verdell Burdine Rutherford Park.

Before he passed in January 2020, Parks Commissioner Nick Fish tasked a committee of nine community members to recommend a new name for the park. They decided to honor Verdell Burdine Rutherford, a prominent and beloved leader in Portland’s Black community, giving this park in outer Southeast Portland the distinction of being the first in the city to be named solely for a Black woman.

Verdell and her husband, Otto, were leaders of the Oregon chapter of the NAACP, headquartered right in their own home in Northeast Portland, and oversaw one of the NAACP’s biggest victories: the passage of the Oregon Public Accommodations Act in 1953, which outlawed discrimination in public places on the basis of race, religion, or national origin. Verdell kept records for Portland’s Black community; her extensive and impressive historical collection is now in the care of Portland State University, a gift from her daughter, Charlotte Rutherford, in 2011.

“Mom rightfully considered herself a local historian,” Charlotte says. “She was that and so very much more: a beautiful woman with a kind heart and a wonderful sense of humor. Most important to and for me, she was a loving, supportive, and inspirational mother.”

Charlotte says that her mother, who passed away in 2001, was a hardworking volunteer and community activist, and although she didn’t “seek the limelight, she would have accepted this honor humbly, knowing that this park will provide a place for the community to gather together.”

Charlotte adds, “The fact that children will benefit would probably give her even more joy. All in all, she would be very appreciative and thankful, as are the family and I.” 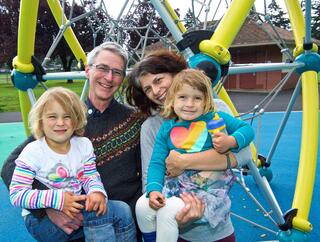 Esther Arellano Harlow, a Roseway resident, couldn’t be happier with Bond-funded renovations at Glenhaven Park. The park has always been a place where people meet neighbors and kids would play in the mud on rainy days. But the park wasn’t a playground destination.

Glenhaven had some of PP&R’s oldest play equipment—dating back to the 1970s. “It felt very hot and exposed during the summer, and it seemed like people didn’t stay long,” Esther recalls. But now, she says, Glenhaven’s playground draws neighbors from across the Roseway, Madison South, and Rose City Park neighborhoods and unifies residents along NE 82nd Avenue.

Esther’s participation in the playground redesign began when she attended the first community meeting in February 2018, where everyone had an opportunity to talk about their families’ needs. Two open houses followed, with the second held during New Year in the Park, an annual event in Glenhaven Park organized by neighbors and businesses in the Cambodian, Lao, Thai, and Burmese communities. “I loved that PP&R tied it into this huge community-driven event as a way to get the final feedback on the design,” she says.

Listening to the community helped PP&R ensure that the new playground would be welcoming and accessible to all. Esther voiced her support for playground options for different age groups and for improved accessibility. Although many people expressed a strong desire for the net climber slide, Esther advocated for the other slide to be accessible to all ages and abilities. “I love the way it’s incorporated into the hill and that I can chase my kids across features that don't require me to do a lot of bending or climbing.”

The new playground allows Esther’s kids, ages 3 and 4½, to run and make big body movements. “The topographic features create a natural flow of play, like a river winding around bends,” she says. Her older child is all over the net climber, and the younger one loves running on the wavy walk. It’s not just for the kids though. Esther notes that the balance beam gives her a chance to do some core work.

Thanks to the playground and the new community garden, the park “feels more active, rather than a dark, empty space.” Esther believes that the new playground shows that “the City is investing in our community and that children are considered important community members who need special places of their own to meet and do the important work of play.” Of course, to her kids, “it is pure fun.”

Read Frank's Story: More than one million trees and growing 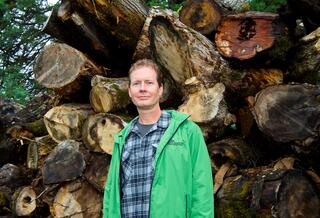 For many of us, the COVID-19 pandemic has meant having more time to spend outdoors. Along with stopping to smell the roses, Portlanders have been looking up and marveling at the city’s incredible trees. These small wonders and towering majesties—evergreen and deciduous, fruit-bearing and conifer—are part of an urban forest that consists of 218,000 street trees, 1.2 million park trees, and countless trees on private properties—and growing.

“Portlanders really appreciate trees and parks,” says Frank Krawczyk, a tree inspector and arborist who has been with PP&R’s Urban Forestry for 22 years. “All our work requests come from the ever-observant public who are taking care of their own trees or noticing a problem with a park tree.”

Urban Forestry manages the city’s urban forest infrastructure for current and future generations. Among its many tasks, the department creates and implements the city’s Urban Forest Management Plan, fosters community tree awareness and stewardship, monitors and assesses the urban forest, responds to tree emergencies, and issues permits for tree planting, pruning, and removal.

Worker safety is paramount to the department, and it is one of the aims of the Bond, which is funding improvements to the Urban Forestry Yard at Delta Park. A new shop and covered, secured equipment area will soon replace an old dairy barn that survived the Vanport flood in 1948.

Frank remembers his surprise on his first day on the job, when he learned that the City was using the barn as a shop. “It has some character but some significant drawbacks,” he says, listing that it has had rodent problems, has inadequate exhaust ventilation for running the dozen or so trucks parked in it, didn’t have heated restrooms for many years, and is vulnerable to earthquakes and fire.

The new shop “will be a big step forward,” he says. “Having a building that is built for storing large trucks, with good vehicle access, security, and ventilation, will be an improvement on worker health and safety. The current hazards will be addressed, and Urban Forestry will be better prepared to respond to tree emergencies during storms, power outages, earthquakes, and other events.”

These updated facilities remind the staff of their important work and how much the public appreciates their care and maintenance of the city’s beloved trees. “The work environment prior to the new office building felt a lot like a patchwork of free WWII leftovers that were assigned to the bureau,” Frank says. “Now I finally feel that my work as a City employee is valued.” 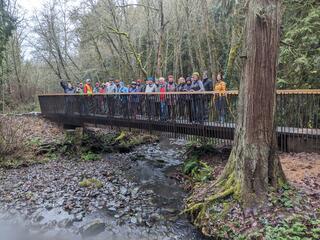 One of the best parts of living in Portland is the ease of getting into the woods without having to leave the city. Trails in Forest Park, like the Wildwood Trail, get a lot of attention, but trails in the southwest quadrant deserve the spotlight as well, especially with two new bridges that finally restore trail connections that were closed for years. The Bond-funded bridges in the Foley-Balmer Natural Area and Marshall Park opened in fall 2019 and are the long-awaited results of strong advocacy from several local groups, including SWTrails.

Committed to improving safety and walking and biking opportunities in SW Portland, SWTrails “advocated for the bridges every chance we got,” says Dave Manville, a SWTrails board member. “The bridges are very vital components of a trail system that leads through Marshall Park and all the way to Lake Oswego. With their closure, the detour was unsafe and not usable by families.”

Dave notes that there’s more to the trails and bridges than just recreation. “For the area’s residents, it’s also about how the bridges and the surrounding right-of-way trails and greenways make up a network for casual walks and getting to important activity centers such as the transit center, shopping centers, and bus stops.”

The Foley-Balmer and Owl Creek Bridges bring the group’s vision of a Hillsdale-to-Lake Oswego trail closer to reality. Although they’re not specifically on the trail, both bridges provide access to it for six neighborhoods located to the west and south.

“Without these bridges, there would be no safe access,” he says.

Dave comments, “The bridges look fantastic and fit in well with the natural surroundings.” He admires the trail reroute at the Owl Creek Bridge site. “The rock wall work is structurally impressive and just looks great in its wild setting.”

“The bridges look quite nice. They used a mix of materials that makes the bridges more attractive,” says Mike Charles, chair of the Marshall Park Neighborhood Association. “They're also very sturdy and should last for a very long time.”

Dave and Mike agree that Portlanders love their trails. “You see all sorts of people—walkers, hikers, runners, people walking dogs, families with kids,” Mike says. “Having these natural trails within the city limits is amazing, especially during the stay-close-to-home restrictions of COVID-19. The parks and trails are being used more than ever, and for the most part, people are being very respectful and trying to maintain a safe physical distance.” He adds, “Most people you encounter on a trail in Marshall Park will smile and say hello.”