Read Brian's Story: A place to gather and be a community 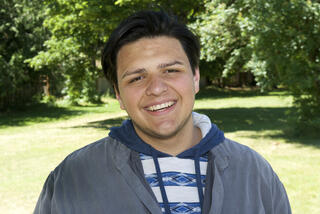 A first generation Portlander, Brian Flores Garcia played soccer at Verdell Burdine Rutherford Park as a kid. The 7.6-acre park is a swath of lawn tucked behind midcentury homes on Portland’s east edge, unknown to many who live just blocks away. A soccer pitch is the only amenity.

Without a playground or places to picnic, Verdell Burdine Rutherford Park has been lightly used. Its narrow entrances didn’t say, “This is your park!” to the many new Portlanders who live nearby.

When the Parks Replacement Bond provided funds to renovate the park and add amenities, Brian volunteered to be on the project advisory committee. He knew his old soccer pitch had great potential and so did the community, one of Portland’s most diverse. At Patrick Lynch Elementary School adjacent to the park, at least 23 languages are spoken, including Russian, Tagalog, Vietnamese, and Spanish.

A PSU senior studying community development, Brian also serves as a Youth Ambassador for Parks for New Portlanders. “My goal is to make parks accessible to people of color and the immigrant community.” Many new Portlanders, he says, don’t know where parks are, or they feel like parks are not for them. Language barriers can also make people fearful of getting lost when trying to find a nearby park. His work for New Portlanders, he says, is all about having “people learn about their city and the resources they have available.”

Beginning with the first community open house in September 2017, neighbors viewed park options and gave input on their preferences. “It was a cool process, with so many translators,” says Brian. “PP&R has done a lot to make sure everyone could participate.”

“People were super happy to fix up the park. So many residents care about the neighborhood and want some place to go and to take their friends and family.”

By the fourth meeting in April 2018, neighbors had decided on what they wanted for their park: a new playground, picnic tables and benches nearby, a path looping through the park, and lighting.

The coming changes to Verdell Burdine Rutherford Park, Brian says, show PP&R’s commitment and dedication to East Portland neighborhoods. “This park will boost the pride of this community.” Like nearby Ventura Park, which he notes is now “crawling with kids” since a new Bond-funded playground and improvements went in, the enhancements will make it a place to gather, where people from every corner of the planet can come together and be a community. 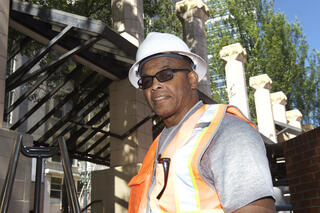 At Faison Construction, a minority-owned Portland firm, owner James Faison employs from 20 to 35 workers on jobs ranging from high-rise construction to light rail projects. At the PCS site, James says Howard S. Wright, a large multi-state firm, mentored his smaller company. He, in turn, mentored his workers as they worked on the Square’s interior spaces. “One of my younger employees, Thomas Williams, started operating equipment but turned out to be a key manager on the project.”

James is glad to partner with PP&R to help propel others forward. He knows firsthand that good government programs assist people to change course, move ahead, and prosper. He came to Oregon from Brooklyn as a teen, choosing work at a Job Corps construction trade program after a stint in juvenile detention. That led to Mt. Hood Community College, a career in construction and maintenance at the Port of Portland, and the founding of Faison Construction in 2000.

PP&R project manager Robin Johnson Craig says she can’t imagine accomplishing the work without Faison Construction as lead for the interior work. “As with an old house, there were surprises once construction begins,” she says. The Square sits atop the site of the city’s first public school and later the Portland Hotel, which opened there in 1890. Relic brick and basalt walls still exist deep underground, and when they presented themselves in unexpected places, Robin called on James’s expertise to solve problems.

James appreciates PP&R for its focus on ensuring funds from the Bond reach every corner of the community. “Parks does a good job putting effort into having contractors do what they say they’ll do when it comes to hiring diverse work crews.” With 40% of the PCS construction contract going to D/M/W/ESB (Disadvantaged, Minority, Women-Owned, and Emerging Small Businesses) firms, the project far exceeded the City’s goal of 20%.

For James Faison, PP&R has been an integral part of his family’s and his employees’ lives, not only as a source for jobs, but also for the healthy recreational choices parks offer. His three children grew up in Northeast Portland, playing at Peninsula and Irving parks. “My sons spent a lot of time at the basketball hoops,” he says. He continues, “I think parks are saving lives. Kids who might not have much guidance or leadership meet other people, other races… everyone playing games together.” 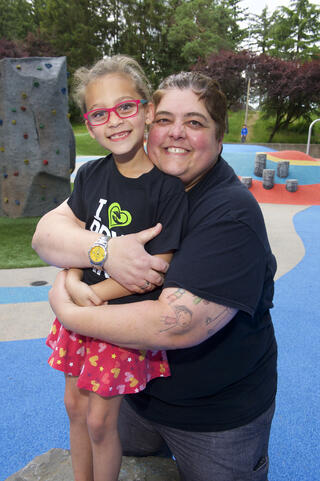 "Guys, wanna play horses?” Yes, they did, and soon a small herd of seven-year-old pony- girls swooped through the playground, up its colorful hills, and down a slide before galloping out onto the lawn.

In its first spring, the Bond-renovated Lents Park playground is already beloved by residents. Deana Tzantarmas grew up on Steele Street, across from the playground, back when it was an all-metal affair. “I pogo-sticked here for the first time when I was four,” she says. Now she watches as her five-year-old Aliki runs out to adventures on the playground’s hills, slides, spinners, and swings. Aliki is a third generation Lents resident. Her grandfather, Saki Tzantarmas, a longtime neighborhood booster, founded the New Copper Penny in 1972, an iconic Lents nightclub and banquet hall on Southeast Foster Road.

On a sunny Friday afternoon, 22 kids played at the new playground, from a tiny toddler summiting colorful mounds on still-wobbly legs, to rambunctious pre-teens playing “hot lava” chase, swooping expertly around obstacles to base atop the bouldering hill.

Deana settles atop the playground perimeter wall, where parents watch the action. “There’s a lot of ownership about the park, and how it’s evolving,” she says. The neighborhood association appreciated being involved with PP&R from the earliest days of the renovation plans. “The community felt involved and fully engaged. There were no surprises, no hidden agendas.”

At meetings and in surveys, neighbors said they wanted slides, swings, climbing boulders, and a mix of natural areas, quiet spaces, and creative play elements. They also asked for structures where kids can play alone, like on a swing, or in groups, such as in the basket spinner, where five children giggle and revel in the vertigo that’s the unique realm of the very young.

The park is all that neighbors hoped for. Its mix of poured-in-place soft surfaces and elements like swings, a bouldering mountain, and slides are meant for active play. An accessible waterfall slide, swing, bongo drums, talking tubes, and picnic tables welcome every child. Brilliant colors and shiny metal structures contrast with adjacent Douglas firs and oaks, and a daisy- strewn lawn that offers a blend of sun and shade, perfect for running, pretending, and day- dreaming.

“Arabella, wanna go on the big hill?” As Arabella’s parent relaxes at a nearby picnic table, a world of imagination and play unspools at Portland’s newest playground. Deana looks around with satisfaction. “I’m so glad to be able to come and feel my child is safe while she’s playing. That’s a big thing.” 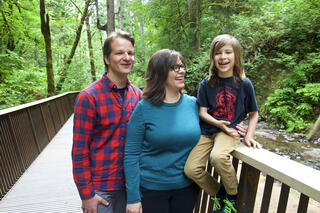 Searching for the biggest bigleaf maple leaf, touching velvety mosses, practicing hiker etiquette, and following a map to the Stone House—it’s all part of the nature adventures that kids can have on the Lower Macleay Trail, site of a beautiful new bridge completed with funds from the Parks Replacement Bond.

On a sunny Halloween weekend, superheroes, princesses, and monsters crossed the new bridge, maps in hand, on their way to an imagination session at the “castle” (the Stone House, a Depression-era stone restroom partially destroyed by the 1962 Columbus Day storm). In their activity packets, they were invited to draw their vision of what the Stone House looked like before it was damaged. “We want to help kids think about and imagine the past,” Bryna says.

The Lower Macleay Trail is Portland’s most popular trail, and possibly its most historic, with colorful stories that long predate its famous “castle.” Mike notes, “We know indigenous people lived here and that this is a very old trail; we really like to incorporate history into hikes with kids along this particular trail.”

Beyond the bridge, discoveries continue on the Lower Macleay Trail. An old growth Douglas fir fascinates young explorers when they learn from their adventure packet that it’s as tall as 15,000 Jenga blocks or five humpback whales lined up.

The new bridge’s design has been replicated at Saltzman Creek on Forest Park’s Maple Trail, where an old bridge had washed out, and at a crossing of Balch Creek on the Wildwood Trail. The bridges complement their wilderness settings, with sturdy yet thin balusters of weathering steel that lean outward to blend into the surrounding forest, while also ensuring low maintenance over the bridge’s long lifespan.

Forest Park is not just part of Mike and Bryna’s business plan; it’s part of their health and well- being. Mike runs its trails and joins ivy-pulling crews. And the trail is where the family makes memories. Every Christmas they hike the Lower Macleay Trail, followed by Chinese food on Northwest 23rd Avenue. The new bridges help ensure many more years of family holiday hikes, as well as everyday discoveries for the thousands of Portlanders who come to enjoy this forest within the city.