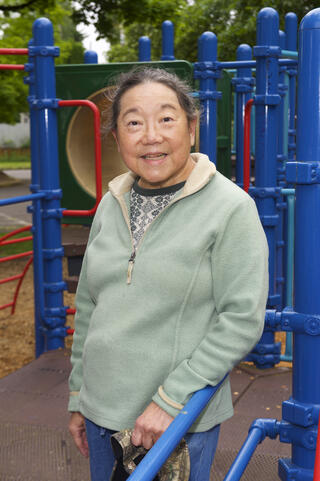 Once a more rural counterpart to closer-in Portland neighborhoods, East Portland had some catching up to do in terms of investments in its parks. But, thanks to the Parks Replacement Bond, East Portlanders will soon see a lot of major improvements in local parks. By late 2017, Ventura Park, on Southeast Stark at 113th Avenue, will be home to two new features: the city’s first PlayForm 7, a sculptural play piece donated by Playworld, and an ultra-functional Portland Loo that replaces severely overused portable toilets.

Arlene Kimura has devoted the past quarter century to volunteer work with an eye on improving East Portland through public investments. She has represented her community’s needs through her service on the East Portland Action Plan, the East Portland Parks Committee, and as chair of the Hazelwood Neighborhood Association. Hazelwood is home to Ventura Park and one of Portland’s largest and most diverse neighborhoods, running from Halsey to Division streets between 96th and 148th Avenues.

“More and more things are happening at Ventura Park,” she says with pride, as she ticks off its many uses: the Free Lunch + Play program serves 200 kids for 60 days each summer, the Portland Slavic Festival brings in 10,000 visitors each July, and an August concert series she helped organize attracts 500 to 800 people per event. Many neighbors bus, bike, or walk to the park to use its playground, walking trails, and bike pump track.

With a bus stop on its south boundary and a network of paved paths on flat ground, much of the park is accessible. The 30-year-old playground, however, has been an exception. With Bond-funded improvements to park paths and new accessible playground surfacing, the improved playground will challenge kids of all abilities.

When Arlene heard that the PlayForm 7 would be donated to Portland Parks thanks to a Design Museum exhibit at the Pacific Northwest College of Art, she requested it be permanently installed at Ventura Park. This play piece riffs off the idea that kids love to play on public sculptures. At last count, kids have found 42 ways to use its slacklines, towers and ropes.  “We are really pleased to get this unique playground,” she says. “Many of our families have kids, and other neighborhood parks don’t offer as much for families to do.”

Arlene joins her neighbors in their excitement that Ventura Park will be seeing upgrades. “Ventura is a well-used park that’s worthy of public investments. With the bond improvements, residents really feel like they are getting something for their tax dollars.” 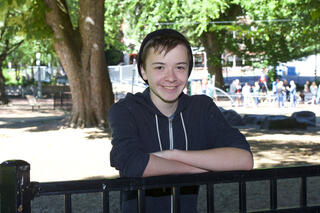 In Couch Park, an old wooden play structure was the domain of Max Nathe and other students at Metropolitan Learning Center (MLC), the public school next door. They would eat lunch under the slide, collect horse chestnuts, and set rules for games on what they called the “top tower.”

When Portland Parks & Recreation (PP&R) announced it would replace the play structure, Max, then a sixth grader, and his mom Lauren got involved. Their goal: an inclusive play space for all ages and abilities in one of Portland’s most densely populated neighborhoods. With its many apartment buildings and grand old homes converted to offices, the Historic Alphabet District is rich on history but has few backyards and just one park, Couch Park, for people to gather and play at.

Max, Lauren, and other neighbors are working with PP&R to enhance this urban gem by helping create the inclusive playground. They’ve raised $500,000 via a partnership of Harper’s Playground and Friends of Couch Playground, to supplement improvements funded by the Parks Replacement Bond.

And Max, along with another MLC student, joined the playground’s project advisory committee, giving PP&R and the design team ideas based on his years playing there with his friends and watching how other kids played there. He’s happy with the results: “We helped create a design that would best support everybody in the community.” 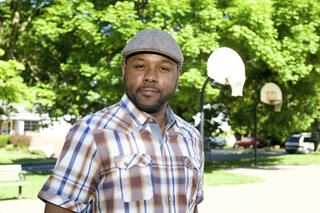 The Parks Replacement Bond, along with its visible benefits in Portland parks, offers many opportunities and experiences for small local businesses.

Nate McCoy is working to make sure minority contractors can actively participate in these opportunities. He’s Executive Director of the local chapter of the National Association of Minority Contractors (NAMC). Many of NAMC’s 42 members --African American, Native American, Asian and Hispanic contractors—are small businesses new to government contracting. Nate helps them navigate the proposal process and connect with public agencies and large general contractors.

As a Black man, architect, construction project coordinator, and lifelong Portlander, Nate speaks from experience when he says, “Minority contractors have typically been disconnected from construction opportunities on public or private projects.” He works with PP&R to ensure language in proposal requests offers opportunities for emerging businesses, with a focus on the community benefits a local contractor can bring to a project.

Nate is working to ensure that a significant percentage of bond contracts be awarded to the “M” in DMWESB (Disadvantaged, Minority, Women-Owned and Emerging Small Businesses). He is optimistic and points to the Bond’s Parklane Park Loo Project which used a minority-owned business as a recent success.

While large general contractors have 300 to 400 employees, the largest local minority contractor employs 50. “The Bond is a good fit for NAMC members because it gives them the chance to work on smaller-scale projects,” Nate says. “There are lots more opportunities for maintenance contracts, compared to the high visibility projects that require a large company infrastructure.”

Nate grew up in inner Southeast Portland. His mom could step out on their front porch on Southeast 20th Avenue and call him home from Colonel Summers Park. There, in the Buckman neighborhood, he was fascinated by the bay windows, turrets and decorative millwork of nearby Queen Anne Victorian homes. Summer art programs at the park fanned that flame.  “By age seven,”’ he says, “I knew I wanted to be an architect.”

Today, Nate’s passionate about helping minority contractors benefit from Portland’s growth. In work done for the Parks Replacement Bond, he notes that they can gain experience and connections. “This bond opens doors and awareness of future projects.”

Read Harriet's Story: It's where the people are 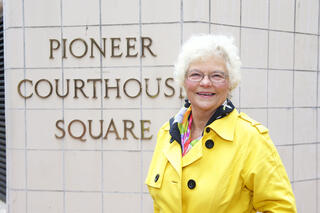 The great urbanist and people-watcher William Whyte wrote, “What attracts people most, it seems, are other people.”  Ten million of us visit Pioneer Courthouse Square each year to attend one of its 300-plus events, get travel information, meet a friend, or have lunch on the steps while watching the human parade.

Harriet Cormack is one of the people who has helped to ensure this legacy is enjoyed by many for generations to come. She heads the Facilities Committee for Pioneer Courthouse Square Inc., the nonprofit that manages the Square’s nonstop docket of events. A passionate urbanist with a 30-year history of downtown office and parks development, Harriet and her committee drafted the statement of need that resulted in the repairs funded by the Parks Replacement Bond.

After 33 years of near constant use, the Square desperately needed repairs.  “The Square was decaying, and we could have lost it,” Harriet says. The membrane under the famous red bricks has been leaking for years, allowing rainwater to drain down into underground offices, retail spaces, mechanical rooms, and restrooms. Three hundred thousand visits per year to the overtaxed restrooms have taken a toll, and the facilities are not entirely ADA-compliant.

Bond funds are being used to replace the membrane and bricks disturbed in the process, repair the heating and ventilation system, and upgrade the restrooms - some of the busiest toilets in the city. In the summer months, they’re used by over 40,000 people per month in peak use, from international travelers to locals, from young to old, and from walkers to wheelers.

“The restroom upgrade”, Harriet says, “mirrors society’s changes toward greater gender sensitivity and accessibility for all.” Eleven private all-user stalls ensure that everyone who visits the Square has their needs met.