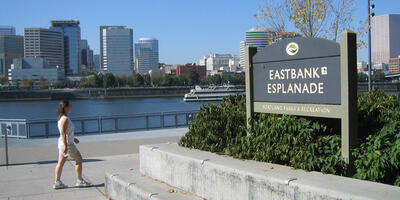 The Vera Katz Eastbank Esplanade is 1.5 miles long, extending north from the Hawthorne Bridge, past the Morrison and Burnside Bridges, to the Steel Bridge with connections to eastside neighborhoods as well as across the river to Gov. Tom McCall Waterfront Park.
On this Page 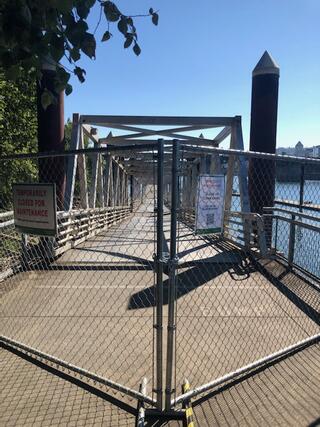 The Willamette River remains low, creating high angles on the entry and exit portions of the floating segment; but users may proceed with caution and when going slowly for their safety.

We appreciate your patience during the recent temporary closure put in place for your safety. Travel well and safely!

About the Eastbank Esplanade

Designed by Mayer/Reed, landscape architects, there are 13 urban markers at key locations along the Esplanade that mark the eastside city street grid. Mayer/Reed also designed 22 interpretive panels that are attached to the markers. The panels provide information about the river and the rich history of the area - from the building of Portland’s bridges to the development of Portland’s eastside. Each marker also includes unique lighting to illuminate the walkway at night.

The Esplanade is a demonstration project for improved habitat areas for fish and wildlife and riverbank restoration. In places, the riverbank has been reshaped with grading that allows for shallow habitat. Bio-engineering techniques use native vegetation and other areas pre-treat I-5 runoff before it enters the river. (All this is a unique feat for a river that seasonally fluctuates 30 feet in water depth.) The plantings also minimize the need for riprap rock for erosion control. 280 trees and 43,695 shrubs were planted along the Esplanade, mostly native plants of Oregon.

The construction timeline for the Esplanade, especially work that had to be done in the river, was timed carefully to be sensitive to fish migration seasons. Several large 'root wads' were trucked to the site from Central Oregon and were anchored in place along the riverbank to provide important habitat areas for fish. Wildlife that inhabits this area includes beavers, ducks, geese, herons, steelhead, and salmon.

To the north of the Morrison Bridge, the Esplanade provides a lookout over what looks like strange rock formations, but which is actually a large accumulation of concrete. The concrete was dumped in this location by cement trucks washing their truck beds in the river during the building of the Morrison Bridge.

Four pieces of public art, created by RIGGA - a group of local artists, are featured between the Morrison Bridge and the floating walkway. The Echo Gate by Ean Eldred, located beneath the Morrison Bridge, is a sculpture that 'echoes' the pier buildings and Shanghai tunnels of Portland's past. It is made of copper plate that was heat-formed, fitted, and welded. Two pieces of art sit on a concrete wall that is a remnant from the bulkhead of the Port of Portland's Terminal 2 and serves as a reminder of early maritime commerce along Portland’s eastside. The Ghost Ship by James Harrison, sited on the south end of the wall, is a grand lantern made of copperplate, copper bar, a stainless steel substructure, and fit with hundreds of prismatic pieces of art glass. It pays homage to the many ships that have come through Portland, and the ones that have gone down in crossing the Columbia River Bar. At the north end, Stack Stalk, also by Ean Eldred, is a hybrid beacon - part masthead, part wheat stem, part smokestack. Made of rolled steel tubes and a stainless steel basket, it suspends a Japanese glass fishing float in the sky as a reminder of the river's connection with the Pacific Ocean. The final piece, the Alluvial Wall by Peter Nylen, clings to a concrete retaining wall and echoes the natural shape of the river before Portland was Portland. It alludes to the interwoven layers of the river’s pre-industrial geology and human artifacts; an amalgam of sedimentation and erosion formed of cold-forged steel plate with bronze castings lodged between its layers.

At 1,200 feet, the floating walkway is the longest one of its kind in the United States and offers the sensation of walking on water. The adjoining 120-ft public boat dock provides moorage for recreational boaters as well as space for a future river taxi and other commercial uses.

The Steel Bridge RiverWalk, attached about 30 feet above the Willamette River, offers pedestrians and bicyclists a new route across the river and provides visitors on the eastside with a stunning overlook from which to view the downtown cityscape.

Learn more about swimming in the Willamette and Columbia Rivers

Swimming in the City’s two major rivers can be fun, refreshing, and can help keep you fit, especially in the warm weather months (July-September). Portland Parks & Recreation (PP&R) recognizes that interest in this activity is increasing, especially with the completion of the Big Pipe project, which has substantially improved water quality in major sections of the Willamette River.

Although they may look like calm, peaceful places most of the year, our rivers are active, living bodies of water and are in constant states of change. Before swimming, please remember:

The State of Oregon’s Department of State Lands has jurisdiction over the Willamette River (nearly all areas below elevation 18, which is the ordinary high-water mark). Swimming is allowed at your own risk.

How to Enjoy River Beaches Safely

Swimming and wading are allowed on the Willamette and Columbia Rivers. However, in most cases, there are no lifeguards on duty. Beach users swim at their own risk. Parents are urged to carefully watch children near the water. The river can have swift currents and water depths can vary. Some safety suggestions:

Keep in mind there is no guarantee that following these guidelines will keep you 100% safe. Swimming can be risky, like any other outdoor sport: biking, skiing, hiking, and others. By swimming in the Willamette or Columbia Rivers, you assume the responsibility for that risk.

The Eastbank Esplanade has been an important part of the long-term vision for downtown Portland. Early city planners included the park in the 1988 Central City Plan. At the direction of City Council in 1993, work began on developing a master plan to guide the design and construction of the Eastbank Esplanade. The City formed a citizen Eastbank Riverfront Project Advisory Committee (PAC) to provide project oversight to City staff. The PAC included members of adjacent neighborhoods, the Central Eastside Industrial Council, landowners, river and environmental enthusiasts, and long-time parks activists. Hargreaves Associates, landscape architects based in San Francisco, was selected as the lead consultant.

Completed in January 1994, the Eastbank Master Plan described an esplanade with docks, piers, overlooks, a plaza for festivals and gatherings, floating walkways, fountains, public art, and connections to the neighborhoods and Portland’s bridges. The Esplanade would connect the east and west sides of the Central City around its central feature – the Willamette River. Construction of the Esplanade began in October 1998 and was completed in May 2001.

The Esplanade was named after Mayor Vera Katz in November 2004 to honor her vision and leadership for Portland - which included support for the construction of the esplanade. A bronze sculpture of the mayor by Bill Bane was installed on the plaza at the south end of the esplanade in June 2006. 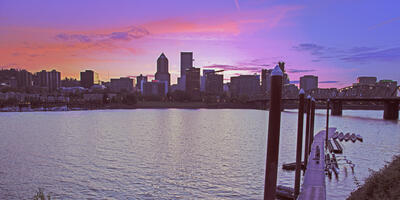