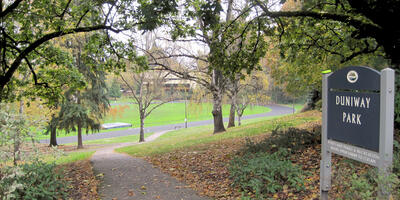 Portland Parks & Recreation (PP&R) and Under Armour announced plans in July 2015 to move forward with a significant partnership to enhance recreational opportunities for Portlanders.

The athletic apparel and footwear leader and PP&R will team up to enhance athletic facilities within the PP&R system. Duniway Park has been identified as a location for field improvements. Under Armour is leasing the adjacent building that previously housed the YMCA. Under Armour in partnership with the building owner will be making improvements to the building and building property. As part of the Under Armour WIN Global philanthropic platform, UA will contribute to the park system in Portland. WIN Global is dedicated to the provision of resources so that communities can provide access to sport, with a particular focus on young people. With its significant use for sports of all types, Duniway Park is a natural fit.

The current site of Duniway Park was once Portland's first Italian settlement colony. The influx of Italians into Portland occurred between 1900 and 1917. In 1918, Duniway Park was named in honor of Abigail Scott Duniway (1836-1915) - writer, newspaper publisher, and advocate for women's right to vote. In 1912, Duniway became the first legal female voter in Multnomah County.

In May of 1995, Duniway Park became the site of the first track of its kind. At that time, a state-of-the-art track surface was installed and made from recycled rubber, including over 20,000 lbs. of athletic shoe soles donated by Nike, Inc. The dedication ceremony included three-time New York Marathon winner Alberto Salazar and 100 children running a 'Victory Lap' around the track.

The Lilac Garden in Duniway Park is a landfill over what was originally Marquam Gulch. The garden is surrounded by steep hillsides covered with fir and cedar - a wonderful backdrop for lilacs in bloom. There are currently about 225 plants in the garden. Included are over 125 varieties, mostly hybrids of Syringa vulgaris which bloom from late March to early May. Of special interest is a large Japanese Tree Lilac which blooms in June.

The majority of lilacs in the garden were grown by B.O. Case, a nurseryman from southeastern Washington. When Case died in 1936, the Portland Garden Club decided to make his collection a gift to the City of Portland. Mrs. Mark M. Thiesen purchased the collection for $2,000 and the Garden Club brought an out-of-state lilac expert to Portland to select a site and design the garden layout.

SW 6th Avenue and Sheridan Street
Portland, OR 97201
Get Directions

Parking: There is no charge for parking in the Duniway lot however, each spot is limited to one-hour parking. Time limits are strictly enforced by the Portland Parking Patrol.