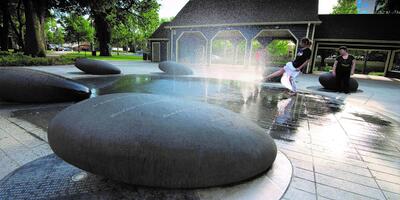 Dawson Park basketball court repairs were completed and the new, perfectly smooth surface is now open for use. The temporary fencing has been opened to allow access, and will be removed on October 5.

The painting of the court was not completed due to unexpected cooler air temperatures, cold surface temperatures and heavy shade on the court.  The court is now slated for painting and beautification in late spring/summer of 2023 as weather permits.

You can find other nearby PP&R basketball courts by using our Find A Park page.

Any questions can be directed to Payton Stang at 971-413-5153 or payton.stang@portlandoregon.gov.

Help us grow and embrace the history of Dawson Park!

More recently, Bernie Foster, Co-founder and Publisher of The Skanner newspaper, requested adding boulders that would recognize the contributions of local Black newspapers such as The Skanner and The Observer. Funding was approved by City Council, and now work is underway to identify stories for the additional boulders.

The original project team has been reunited for this effort, with the addition of local Black historian, Kimberly Moreland, for the historical research efforts. The goal is to complete the installation in either Spring or Fall 2023 to avoid the busy summer season in the park.

Learn more about the project in this presentation set:

Dawson Park was acquired by the City of Portland in 1921; it is named in honor of an Episcopal minister, the Rev. John Dawson, who was an advocate of child welfare and civic improvement in the 1920s. This space was once a cow pasture and then a ballfield used by the Immaculate Heart Church and School. It was also a frequent stopping place for small circuses and medicine shows. By the late 1940s, it functioned as an unofficial town square for the surrounding African American community. The park was the epicenter of many political and social movements during the next 30 years. Robert F. Kennedy spoke here. Civil rights marches began here.

The gazebo in the park was built in 1978 to showcase the 120 year-old cupola salvaged from the Hill Block Building, once a cornerstone of the Albina commercial district and an informal gathering place for the Black community. The onion-like dome was landmark architecture on the Hill Block Building located on the northwest corner of the intersection of N. Russell Street and Williams Avenue. The building and many other businesses and homes were torn down in the early 1970s to make room for a proposed expansion of the Emanuel Hospital campus, displacing many Black residents. However, the expansion did not take place due to a cut in federal funds, and many lots are still vacant today.

By 2007, the park had fallen into some disrepair, and a Dawson Master Plan, developed with the community, envisioned restoring it as a key community gathering space. The plan prioritized a list of desired improvements, including the restoration of the Dawson Park Gazebo. In 2008, Urban Renewal funds were used to restore the 120-year-old cupola salvaged from the Hill Block Building.

The project also included a new public art installation on the fence around the playground. There are 14 cast concrete medallions that make up a piece called "Honey In the Bee Ball—I Can’t See Y’all" by Black Portland artist, Isaka Shamsud-Din.

Shamsud-Din (born 1940) came to Portland via Texas when he was in the first grade. The sixth of 14 children, Shamsud-Din became aware of the many inequitable systems as a young black person navigating his world on a daily basis. However, Shamsud-Din has maintained his commitment to art, education, and work for the African American community and his home. In 2019, Shamsud-Din was recognized with Isaka Shamsud-Din Day, a Juneteenth celebration at Portland’s City Hall honoring his work as an artist and social justice leader.

The artist provided this description of his work:

"My humble testament and homage to a few African American men and women whose works vividly portray the highest ideals. Spirit, courage, creative, resilient, resourceful are just some attributes that apply. In a difficult, sometimes hostile environment. Their legacy of achievement and positive force impacted our community and beyond. May this art inspire others to inquire and discover to further illuminate our sheroes and heroes. We will all be enriched. The phrase “honey in the bee ball, I can’t see y’all” was used in the South during the game of Hide and Seek. It was replaced by “ready or not, here I come” when brought North."

Learn more at the Regional Arts & Culture Council page for this piece.

N Stanton Street and Williams Avenue
Portland, OR 97227
Get Directions