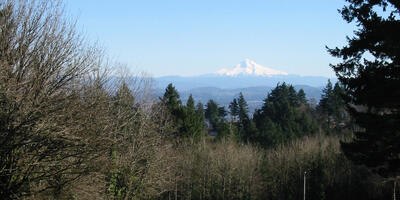 Council Crest is thought to be the highest point in Portland at 1,073 feet above sea level. Originally known as Talbot's Mountain after its pioneer settlers, it has also been known as Glass Hill and later as Fairmount, the name of the road that encircles it. According to legend, Council Crest got its name because it was here where Native Americans held meetings and built signal fires. According to McArthur's Oregon Geographic Names, however, it was named in 1898 by delegates to the National Council of Congregational Churches, who met on the top.

The water tower that now stands atop Council Crest used to be a 77-foot-tall wooden observatory, part of the Council Crest Amusement Park which operated from 1907-1929 and was torn down in 1941. From the top of the hill, one can see five mountains in the Cascade Range: Mt Hood, Mt St Helens, Mt Adams, Mt Jefferson, and Mt Rainier. In addition, the park boasts a fantastic 180-degree view of Portland and surrounding towns.

In July 1956, a welded, sheet bronze drinking fountain featuring a mother and child was installed in the park. Sculpted by Frederick Littman, an associate professor of art at Portland State College, it has been mistakenly identified as a pioneer woman. The sculptor said the statue did not represent a particular era; it was simply a mother and child playing in the park and depicts joy. The fountain was made possible by a $6,000 bequest to the city in 1949 from the estate of Florence Laberee, widow of local builder and contractor George P. Laberee.

In the 1980s, the statue was stolen in the middle of the night by vandals who used hacksaws to dismantle it from its base, sawing through the mother's ankles. Nearly 10 years later, during a narcotics raid on a home in northeast Portland, officers found the rusty statue in the backyard under a cover. The statue was re-erected in the center of the park near the entrance, as opposed to its original location on the eastern side of the park.