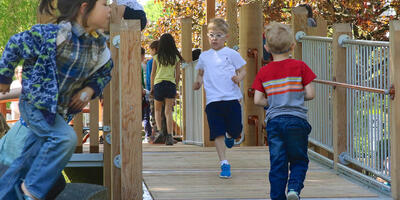 This park is named after Captain John Heard Couch, who first sailed for Portland from Newburyport, Massachusetts in 1839. His first home in Portland was near where Union Station is today, but he owned all the land from the river to approximately NW 23rd Avenue and from Burnside north for a mile. Captain Couch developed this land and named the blocks alphabetically (A Street, B Street, and so forth). During the last half of the 1800s, Couch's land was known as the Alphabet District. The captain was a well-liked, civic-minded man, so it's only appropriate that one of Portland's beautiful parks be named in his honor.

The site of today's Couch Park was once the estate of 19th century merchant prince Cicero Hunt Lewis, who married Captain Couch's daughter Clementine. The estate consisted of an elegant mansion, stables, and a greenhouse, all of which were built in 1881. The Lewises raised eleven children on these grounds. After the Lewis house was demolished, the Portland School District acquired the property in 1913 and built a new Couch School to replace the first one built in 1882 located at NW 17th & Kearney. The block east of the school, now the park, was used as a playground.

In 1970, the Captain John Brown house (built in 1890 at 2035 NW Everett) was moved onto the northeast corner of the site to save it from demolition. Private citizens donated money to restore the building as a center for senior citizens and medical services. A HUD Historic Preservation Agency grant of $100,000 was insufficient to complete the restoration and when the additional funds couldn't be raised, the project was abandoned. By 1973, the house had been severely vandalized and was finally demolished.

Couch School became a special school in 1968 and in 1974, its name changed to the Metropolitan Learning Center (MLC), leaving only the park with Couch's name. In 1975, a community-driven master plan was created to guide Couch Park's design and construction. MLC students helped with design ideas and residents of the surrounding neighborhood participated in the construction of the park and in the building of its play structure.  Three pieces of artwork were installed in the park: a steel sculpture by David Cotter, mosaic tiles by Jere Grimm, and carved wooden pillars by William Moore, Eric Jensen, and Brent Jenkins that supported the playground shelter.

In 1994, the Parks General Obligation Bond Measure funded repairs and upgrades at Couch Park.  An updated Couch Park Master Plan was completed in 2003. In 2012, PP&R removed the monkey bars and several other features at the 1970s playground due to rotted support beams. In 2014, the wooden play structure and stage at Couch Park was closed and removed after spending approximately 40 years exposed to the Oregon rain. While repairs were made as long as they could to the beloved park feature, the structure had deteriorated beyond repair.

NW 19th Avenue and Glisan Street
Portland, OR 97209
Get Directions