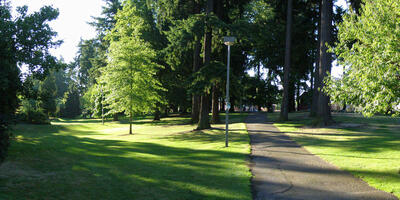 Active
On this Page

In 2015, the Grant Park Neighborhood Association submitted an application through the Parks Proposal Process requesting a permanent, fenced Dog Off-Leash Area (DOLA) in Grant Park. The Neighborhood Association submitted the Parks Proposal based on their experience that the current system of alternating DOLA sites was problematic. Three possible fenced alternatives were identified as supportable by PP&R staff and the GPNA.

In October 2015, PP&R worked with the GPNA to host a public meeting to provide the community with the opportunity to review and discuss the alternatives. At the end of this process, PP&R committed to working with the GPNA to develop Option A.

Since that time, PP&R has determined that locating a permanent fenced DOLA in the location of Option A is no longer possible, due to the close proximity to park neighbors and other site concerns (trees, grading, and drainage). These same concerns led to the closure of the fall Off-Leash Area in 2016.

A community meeting was held on April 20 to discuss the future of the Dog Off-Leash Area (DOLA) and consider recommendations to improve its function within Grant Park.

Grant Park is an extremely well-used and highly programmed park. We are hopeful that the community can work together to accommodate the variety of needs and uses. If the level of inappropriate use or user conflict increase, we may consider closing the Dog Off Leash Area.

To report problems in the Dog Off-Leash Area, contact the Ranger Hotline at 503-823-1637, or visit parkscanpdx.org

PP&R plans to hold a community meeting on April, 20, 2017 to discuss the future of the Dog Off-Leash Area and how we can improve its function and compatibility in the park.

Based on community feedback, Portland Parks & Recreation (PP&R) has designated a future location for a fenced DOLA. The designated location will be north of the asphalt pathway, between NE 35th Ave and NE 35th Pl on the north side of the park. The fenced DOLA will be built when funding is available.

The current system of alternating DOLA sites between the Fall DOLA and the Winter/Spring/Summer DOLA next to the soccer field has proven to be problematic over the years. Issues include:

In recent years, the public has requested a fenced DOLA to resolve these ongoing issues through PP&R’s Project Proposal Process. After thorough review, PP&R identified three possible locations for a permanently fenced DOLA at Grant Park. PP&R worked closely with Grant Park Neighborhood Association (GPNA) representatives to engage the public in the process of finding a solution.

On October 1, 2015, GPNA and PP&R held a public meeting at Grant Park Baptist Church for the public to provide input concerning the DOLA improvements. More than 50 people representing nearby neighborhoods, Hollywood/Portland Youth Soccer, and nearby schools attended the meeting. Participants provided feedback regarding the three options for a fenced DOLA in the park (see Grant DOLA Service Areas.)

After the meeting, PP&R asked attendees to complete a survey, which was also available online for two weeks, and coordinated with GPNA to share the survey through their website, a private social network called Nextdoor, and their Facebook page. 230 individuals participated in the Grant Park DOLA Survey. As a result, PP&R made an informed decision on designating Option A (see Survey Summary) as the future fenced DOLA location based on the majority view of participants.

The project is estimated to cost $19,000 for fencing, irrigation capping and modification, and surface improvements. Since the fenced DOLA project will cost more than $10,000, the project will be added to PP&R’s Capital Improvement Project (CIP) list. Community fundraising would allow the project to move forward more quickly. At a recent Board Meeting, GPNA pledged $500 toward the DOLA project. The present DOLAs at Grant Park will continue to alternate seasonally as usual until funding can be secured for the project.

The park is named after Ulysses S. Grant who visited Portland three times, a rare thing for a president to do in the days before air travel - or even before standardized rail travel! Grant was first assigned to Fort Vancouver where he made friends with many of Portland's politicians.

Grant Park was the setting for many scenes in children's books by Beverly Cleary. In 1991, a group of teachers, librarians, and business people formed the Friends of Henry & Ramona, and began to raise funds for the Beverly Cleary Sculpture Garden for Children. Portland artist Lee Hunt created life-sized bronze statues of three of Cleary's best-loved characters - Ramona Quimby, Henry Huggins, and Henry's dog Ribsy. Scattered around the concrete slab are granite plaques engraved with the titles of the Cleary books that take place in Portland - and a map of the neighborhood showing where events in the books "really happened." The Sculpture Garden was dedicated on October 13, 1995.

Park
Park Location or Entrance
NE 33rd Avenue and US Grant Place
Portland, OR 97212
Get Directions