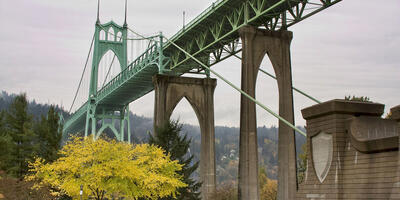 Sections of the beach at Cathedral Park will have limited access from September 15 to 17, 2021, to allow for safe collection of soil and water samples. During this time, it’s anticipated that one or more sections (shown in the diagram below) will be open, as other sections are temporarily closed. Please be mindful of signage and the work being done in this area. Work should not impede the boat ramp or dock.

Take a virtual tour of the trees at Cathedral Park

The site which now bears the name Cathedral Park is steeped in history. It is believed to be one of the 14 Lewis and Clark landing sites in the Vancouver-Portland area: William Clark and eight men camped there on April 2, 1806. This spot had been a fishing and camping site for many area Indian tribes. In 1847, the founder of St Johns, James John, settled on the site and operated a ferry to Linnton across the Willamette River. In 1931, the St Johns Bridge was built on the site with 400-ft towers and a main span of 1,207 feet. It is the only steel suspension bridge in Portland.

In the early 1970s, Howard Galbraith, the "honorary mayor" of unincorporated St Johns, got tired of the junkyard state of the area under the eastern end of the bridge. He organized a drive that eventually raised $7.5 million to build a park. After eight years of community fundraising, combined with state, county and city funding, the park was dedicated at a community celebration on May 3, 1980. It got its name from a photo of the St Johns Bridge by Al Monner that appeared on the front page of the Oregon Journal in 1968. Reference was made to its beautiful cathedral-like arches and the park found its name.

In June of 1980, the Cathedral Park Committee sealed a time capsule (complete with ash from Mt St Helens) into the Wall of History in the Memorial Garden in the park. The time capsule will be opened in 2030. Measurements for how to find the capsule (which is covered with a stone that matches the rest of the wall) have been left with the Oregon History Center. Committee chairperson Sharon Roso said, "We want to make sure that in 2030 people will remember there's a celebration due in St Johns."

In 2008, a sculpture by Donald Fels was installed beneath the St Johns Bridge. Drawing on the River reflects back on a century of industry in St Johns and is an homage to both the mills and the workers who ran them. The piece also invokes the river itself, which powered the mills and is the reason the workers settled here.

N Edison Street and Pittsburg Avenue
Portland, OR 97203
Get Directions

Take a virtual tour of the trees at Cathedral Park