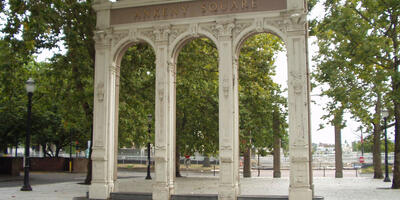 Ankeny Plaza was once the heart of Portland's entertainment and commerce. The first true public space in the Skidmore-Old Town District, it is on the National Register of Historic Places. It was built on vacated Vine St. and Block 35 on the site of the Bank of British Columbia.

The Plaza was updated in the mid-1980s when TriMet's light rail system (MAX) was slated to travel through the area. PP&R was careful to keep the restoration sensitive to its historical backdrop. Donations of original wrought iron and other historic building materials were used in order to restore Ankeny Plaza to its former glory.

The Skidmore Fountain is Portland's oldest piece of public art and has been praised as one of the finest fountains in American art. Stephen G. Skidmore, a druggist who arrived in Portland by covered wagon, left $5,000 in his will for a fountain for "men, horses and dogs" (Henry Weinhard offered to pump beer into the fountain for the dedication). His friends raised an additional $18,000 and New York sculptor Olin Levi Warner was commissioned to design it. The fountain was styled after fountains Skidmore viewed on his visit to the 1878 Paris Exposition. It is 14-feet-tall with a bronze basin eight feet in diameter resting on a central granite shaft and two bronze caryatids, classical Grecian female figures. Four stone watering troughs alternate with stone steps leading to the octagonal base, which is inscribed "Good citizens are the riches of a city," a quote from C.E.S. Wood. The troughs fill with water flowing from the fountain through miniature lion heads. In its early days, metal drinking cups were attached by chains to four of the heads. The bronze work was cast by Bureau Bros. of Philadelphia and the base was made of dressed granite from the Franklin quarries in Maine. Although, the plaza was the center of Portland when the fountain was dedicated on September 22, 1888, the New York Tribune implied that the fountain was too fine an achievement "for a western city with its bewhiskered, bepistoled lot of frontiersmen."

SW Naito Parkway and Ankeny Street
Portland, OR 97204
Get Directions