Portland's sports, arts and entertainment venues support the local economy and they offer residents and visitors a place to have fun, whether that means being able to enjoy a Broadway show or cheer on the Trail Blazers at an NBA game. 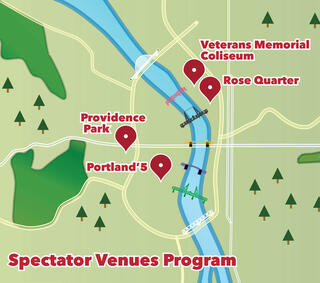 The Spectator Venues Program oversees the City of Portland's interests in City-owned venues including the Veterans Memorial Coliseum, Providence Park and the three theater buildings operated by the Portland'5 Centers for the Arts.

Collectively, these venues attract millions of visitors every year and generate millions of dollars that support the local economy.

City-owned venues are operated through long-term agreements that are tailored to each specific venue. In the case of Providence Park and the Rose Quarter/Veterans Memorial Coliseum, the City pays for some facility repair and replacement costs and debt service associated with major renovations, and receives revenues from ticket fees and parking in the City’s garages.  At the Portland’5, the City makes a set annual contribution to operating costs and all other costs are the responsibility of the operators.  The City receives no direct revenue from Portland’5 operations.

The Spectator Venues Program also plays an active role in supporting travel, tourism and economic development in greater Portland through partnerships with such organizations as Travel Portland and Sport Oregon.

The program is funded by the Spectator Venues & Visitor Activities Fund, with revenue originating from ticket fees, parking revenues and an allocation from the Multnomah County Visitor Facilities Trust Account, which is funded by a 2.5% transient lodging tax surcharge.

The City is working closely with its operational partners at all facilities to incorporate accessible features wherever possible. Visitors are encouraged to review individual venue websites to learn about accommodations prior to visiting. As part of these efforts, the City of Portland has adopted an Americans With Disabilities Act Title II Transition Plan.