City of Portland, Metro team up to explore future of Keller Auditorium 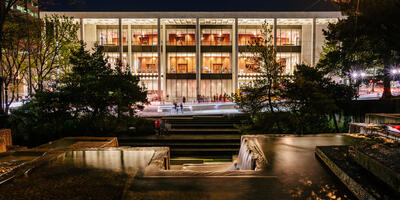 Keller Auditorium has been one of Portland’s largest performing arts venues for more than 100 years. Owned by the City of Portland and operated by the Portland’5 Centers for the Arts, a service of Metro, the Keller is the largest theatrical auditorium in Oregon and is the only theater in the Portland area capable of hosting Broadway performances, large operas and ballet productions.

Keller’s considerable size — and role — is vital to Portland’s arts community, generating half of the revenue for Metro’s Portland’5 theaters, which helps to make smaller, local productions feasible, affordable and accessible.

Now the City of Portland and Metro are teaming up to explore options for the Keller’s future, with a focus on ensuring its structural safety and modernizing amenities.

“The Keller has drawn large, popular shows to Portland for decades,” said Robyn Williams, executive director of Portland’5 Centers for the Arts. “It is essential that we continue to attract these shows in the future, to not only generate revenue but also provide signature arts experiences.”

Keller Auditorium underwent an extensive renovation in 1968, the first – and last – major remodel since its construction in 1917. Guest amenities, stage needs and mechanical and production systems are now antiquated, and like thousands of older civic buildings up and down the West Coast, the Keller and its aging infrastructure was not built to withstand a major earthquake.

“Building codes have changed over the last half-century and we also know more about our region’s earthquake risks,” said Karl Lisle, who manages the City’s Spectator Venues and Visitor Activities Program. “Our venues meet all fire and safety requirements for existing buildings, but now we need to explore ways to ensure safety and the success of future productions in the event of a major seismic event.”

Upgrading or replacing Keller Auditorium would require significant investment and collaboration. Preliminary evaluation from the 2020 seismic study estimates the cost at $119 million to $245 million – numbers that would require further analysis. Neither the City, which owns the building, nor Metro, which operates it, has that magnitude of funding available to invest in the Keller.

To start the conversation, the City has committed $200,000 from its spring 2022 budget update to work with partners on assessing options and begin seeking community input. Over the coming months, City staff will develop an approach to engage with community members and stakeholders to inform recommendations for the future of the Keller. Specific opportunities to get involved will be announced later this year.

As Portland’s arts scene comes back to life, Lisle said, it’s time to think about the future of one of the city’s most important performance spaces.

“We couldn’t have reopened our venues without the support of our performers, guests or the community,” he said. "Now we’ll look to them again to help us determine next steps.”