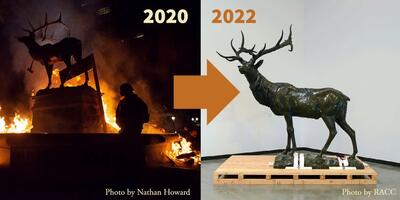 The City of Portland is preparing to bring back the beloved Thompson Elk, which has been safely stored since it was damaged during protests in 2020.
Published
February 15, 2022 1:00 pm

Downtown feels a little lonely without Portland’s unofficial mascot: the bronze elk that watched over Main Street for 120 years. But not for long.

Two years after removing the statue due to damage sustained during protests, the City of Portland is preparing to bring it back. The elk is expected to reappear in late 2022 or early 2023 with a new base, a dedicated bike lane and an improved bus lane.

“Few pieces in our rich public art collection are as beloved by Portlanders as the elk,” said City Commissioner Carmen Rubio, who is Portland’s Arts Commissioner and liaison to the City Arts Program. “Portlanders have told us they want the elk back as soon as possible, and I’m thrilled that we’re finally taking concrete steps to return it this year.”

Built in 1900, the Thompson Elk Fountain was named for its benefactor: David P. Thompson, who served as Portland’s mayor from 1879 to 1882. A founding director of the Oregon Humane Society, Thompson wanted to pay homage to wildlife that once roamed the city.

The hulking elk, sculpted by Roland Hinton Perry, stands 9 feet tall and weighs 3,000 pounds. The granite base and water-spouting fountain were designed and built by H.G. Wright.

Perched between Lonsdale and Chapman squares, the elk split Main Street smack-dab down the middle, requiring cars to veer left or right as they passed – and prompting passersby to gawk. The statue has been an object of endearment, a gathering place and a hub for activism over the years.

The elk’s antlers were damaged by protestors during the Occupy Movement of 2011. Nine years later, as a racial justice reckoning swept the United States, downtown Portland became a focal point for nightly protests. Protestors lit several fires in the fountain’s troughs and destroyed portions of the granite. The elk was damaged as well.

To protect the statue, the City’s nonprofit arts partner removed it on July 2, 2020. The Regional Arts & Culture Council has stored the elk safely and fully restored it with funding from the City’s arts insurance policy.

City officials went to great lengths to preserve the base and fountain, too. The Water and Parks & Recreation bureaus teamed up to salvage as much stone as possible and cover the site in gravel.

But the historic fountain would be difficult to rebuild. A team of City experts is exploring options to replace it with a smaller base that would no longer operate as a fountain. This idea reflects the extensive damage , safety considerations and the long-term costs of maintaining a water feature situated between two lanes of motor vehicle traffic.

“I am beyond thrilled that the Portland elk is returning to Main Street, and I am grateful to the many City employees who have helped the elk along its way. Our Portland elk also gives the City an opportunity to experience the permitting process firsthand," said City Commissioner Dan Ryan, who is co-leading a Citywide initiative to improve permitting processes. "Permitting makes our infrastructure safe, responsible and sustainable — it’s also vital to ensure our processes are efficient, from affordable housing to our arts infrastructure. Welcome back to the elk!”

This week, the City Arts Program kicks off the process by applying for a retroactive permit to dismantle the statue and base. Required due to a historic resource designation, the process is known as a “demolition delay”; in other words, the City is officially recognizing a demolition that took place on an urgent timeline.

By approving the application, the Bureau of Development Services will effectively remove the statue’s historic resource designation.  A formal decision is expected in June, following a required 120-day waiting period.

While this process is underway, the City’s “elk team” will continue refining their proposal for the statue’s homecoming. They are committed to returning the statue to Main Street, though the exact placement could be adjusted.

Once the “demolition delay” is approved and site plans are finalized, the Portland Bureau of Transportation will apply for a permit to install a new base for the statue. Community members will have the opportunity to comment during the design review process.

The Transportation team anticipates installing the base, improving the bus lane to better accommodate TriMet buses, and adding a bike lane to connect cyclists from the Hawthorne Bridge to the upcoming Southwest Fourth Avenue Improvement Project. Construction could begin as early as this fall, depending on when the design is approved by the City’s Design Commission.

“It’s fitting that the elk – an important piece of Portland’s past – will help improve our transportation system for the future,” said Commissioner JoAnn Hardesty, who oversees PBOT. “This project will be a big win for bus commuters, cyclists and, of course, the elk.”

The elk declined to comment. Asked whether he is looking forward to a homecoming celebration, he maintained the stoic gaze that has charmed Portlanders since 1900. 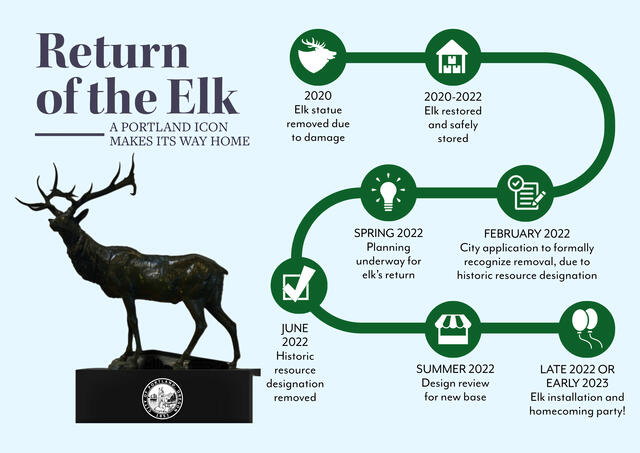 About the City Arts Program