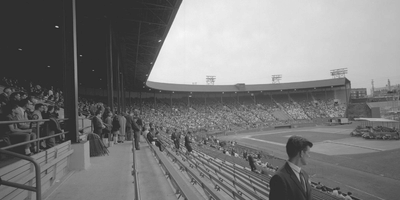 What we now know as Providence Park has lived through many iterations in its nearly 100-year history. From its humble beginnings as an amateur field in 1926 to hosting world championship games and some of the world's most famous singers, here's a brief recap of the historic stadium's existence.
Published
October 28, 2021 4:40 pm
Updated
October 29, 2021 1:30 pm

What began as a modest amateur athletic field has adapted to serve as Portland’s premiere outdoor sports arena for nearly a century. To celebrate Providence Park turning 95 this month, we wanted to share a snapshot of its rich history.

The Multnomah Athletic Club built Multnomah Field in Tanner Creek Gulch in 1893. Demand for the space only grew over the next 30 years between athletic programs and special events, including President William Howard Taft’s speech in 1909. In 1926, the Athletic Club spent $500,000 to expand Multnomah Field into a stadium and added the upper seating bowl and wooden benches that remain in use today.

The Many Lives of Providence Park Stadium

In the early 1930s, Oregon legalized pari-mutuel betting and the Athletic Club installed a dog track in 1933. The Multnomah Kennel Club was the stadium’s only major tenant for over 20 years. In 1956 the stadium’s first major renovation project was completed and the racing track was demolished to make way for the City’s first minor league baseball team: the Portland Beavers. Permanent east end and southeast corner seating and box seats were also built.

The City of Portland purchased Multnomah Stadium for $2.1 million in 1966 and renamed the stadium Civic Stadium. The Portland Beavers played in Civic Stadium through 1972, followed by the Portland Mavericks from 1973-1974.

The Portland State University football team first began playing at Providence Park in the 1960s and played there throughout the years until 2018.

In 1980 a successful ballot measure provided $9.5 million for stadium improvements. A new press box was installed and the roof was replaced and expanded to cover additional seats in 1981. The Beavers played in the stadium through 1993, winning the Pacific Coast League pennant during that time. The A-Bend Rockies relocated to Portland for the 1995 season and were league champions in 1997. Both teams' wins helped solidify demand for major league baseball in the northwest and paved the path for the return of the Triple-A Pacific Coast League to Portland in 2001.

In 2000, Portland City Council authorized $38.5 million for stadium modernizations and accommodations for both the Timbers and Portland Beavers. The concourse and seating were updated with new luxury suites and club seats. Substantial seismic upgrades were completed, office space was built, and a new sound system, electronic video board and manually operated scoreboard were added. The outfield seats were removed and NeXturf was installed. A total of 19,566 spectators could be accommodated after renovations were complete.

The naming rights of the stadium were purchased by Portland General Electric, and it was renamed PGE Park. The Beavers played at the stadium until 2010. Ahead of the Timbers’ 2011 entry into Major League Soccer, City Council approved a $31 million renovation to create a soccer-specific stadium that accommodated approximately 21,000 guests. Three years later, the stadium was renamed Providence Park as part of an agreement with Providence Health & Services.

In 2020, the City worked with a team of architects and engineers to complete Providence Park’s Americans with Disabilities Act refinement plan. The plan examined 120 potential ADA compliance barriers; solutions are being incorporated into projects wherever possible.

Notable Events through the Years

Throughout the last 95 years the stadium has hosted celebrated dignitaries, politicians, youth camps, business events, Rose Parade programs and graduations. During halftime at a 1942 University of Oregon football game, 200 young men were inducted into the Navy.

Providence Park has hosted the beautiful game since the Portland Timbers were founded in the North American Soccer League in 1975. Various iterations of the team have called the stadium home, but all have attracted record crowds.

The Thorns drew over 16,000 fans to their inaugural season opener in 2013, and have consistently seen high attendance since their inception, making them by far the most successful club in the National Women’s Soccer League. In 2019, the Thorns averaged over 20,000 fans per game. That same season, they hosted a sellout crowd of 25,218, the best attended women’s soccer game in the league’s history. The Thorns’ robust fan support allows them to attract and retain some of the best players in the world. In 2016, the Thorns were awarded the National Women’s Soccer League Shield, an annual award given to the team with the best regular season record. In 2013 the Thorns took the Championship title and four years later, they did it again.

The Timbers played their inaugural season in 1975. They drew home crowds of 20,000 during their first year and made their way to Soccer Bowl ’75. Their first season remains the best in Timbers history. The success of that first season engendered a passionate fan base and earned Portland the nickname “Soccer City USA.”

The F.C. Portland Timbers joined the Western Soccer Alliance in 1985, bringing professional soccer back to Portland after a two-year hiatus. The Timbers went on to capture the United Soccer League First Division Commissioner’s Cup as regular-season champions in 2004 and 2009. The Timbers won their first Major League Soccer championship in 2015.

The Stadium is owned by the City of Portland, and is operated by Peregrine Sports, LLC, which owns both the Timbers and Thorns. It hosts approximately 150 events per year, including sporting competitions, concerts and special events. Providence Park is one of the oldest soccer-specific Stadiums in use in Major League Soccer and is widely regarded as one of the best soccer stadiums in the country.

As our community learns to navigate Portland’s reopening and recovery from the devastating economic impacts of COVID-19 closures, Providence Park is open for business. With COVID-19 health and safety protocols in place, the Portland Timbers and Portland Thorns welcomed fans at limited capacity  for the first few matches of the season before going to full capacity in July.

In addition to appeasing loyal spectators, the historical stadium has many other positive impacts on the city. Providence Park creates local jobs and increases economic activity such as retail shopping, transportation, restaurant dining and other tourism activities. At the heart of the near-centenarian facility, though, will always be its ability to host renowned sports events, provide a premiere spectatorship experience and instill a sense of camaraderie and community pride – and will hopefully be able to do so for another 95 years.

Additional information and photos can be found in the Oregonian article Providence Park through the years: Historic stadium has served many purposes since 1926.