Phase I: Proposed Ballot Measure Regarding the Structure of City Government 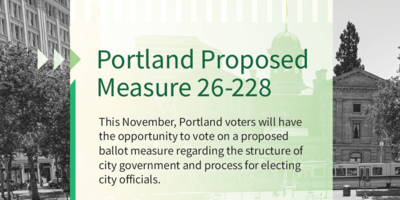 Note: This information, except for additional website links(s), was reviewed by the Oregon Secretary of State’s Office for compliance with ORS 260.432.

Proposed Ballot Measure Regarding the Structure of City Government

If voters do not pass the proposed ballot measure there would be no changes to Portland's form of government or election system, and the annual cost of between $900,000 and $8.7million would not be incurred.

Background on the charter review process

What is a City Charter?

A City Charter is like a city’s constitution. It is the guiding document that defines how to vote for city elected officials and sets out their roles and responsibilities, among many other things.

Why propose a change to the City Charter now?

City Council must appoint a 20-person Commission at least once every 10 years to review and suggest changes to the City Charter. The Charter Commission has a unique authority: if 15 or more of the 20 commissioners agree on a change, then those changes go directly to the ballot.

Who can change the City Charter?

The City’s Charter can only be changed by City voters.

How was the proposed restructuring plan created?

The Charter Commission engaged a wide range of people to collect feedback regarding the city government and elected leaders. The proposal was developed using the collected input, along with input from city staff and topic-specific subject matter experts.

If passed, the proposed Ballot Measure would restructure city government and process for electing city officials

If passed by voters,what would the proposed measure do?

Why are the proposed reforms in one ballot measure?

What is Portland’s current form of voting system?

Currently, Portland voters cast one vote for each candidate for each office in citywide elections for mayor, auditor, and city council members. If no candidate for an office receives more than 50% of votes at the May primary, the top two candidates compete in a November runoff election.

What is ranked choice voting?

For multi-member district-based city council seats, a “single transferable vote” method would be used. Candidates would win when they exceed a threshold set by the number of available positions. Ballots would be counted in rounds; any candidate exceeding the threshold would be elected, and that candidate’s votes above the threshold would be proportionally transferred to other candidates based on voters’ preference. The candidate receiving the fewest votes each round would be eliminated, and that candidate’s votes would then be transferred to other candidates based on voters’ preferences. The process would continue for as many rounds as necessary until all positions are filled.

Who else uses ranked choice voting and geographic districts with multiple representatives?

Many jurisdictions use ranked choice voting for multi-member districts, including the following: Australia, Ireland, Malta, cities in Scotland, and cities in New Zealand. Geographic districts with multiple representatives per district are a common type of voting system across the world.

Why would the proposed ballot measure do away with primary elections for city offices?

How are city council members elected currently in Portland?

Currently, Portland has been electing city council members in an at-large system, meaning any eligible candidate in the city can run for office and be elected, regardless of their geographic location.

Why does the measure propose geographic districts with three city council members to represent each district?

Geographic districts with three city council members per district would increase geographic representation to residents of the city and would provide voters of each district with the opportunity to elect a candidate from their community and hold those elected leaders accountable. If passed, each part of the city would be represented by multiple elected leaders allowing for residents to access multiple pathways to share feedback.

What is the reasoning behind expanding city council from 5 to 12 members in the proposed measure?

Portland has not increased the size of the City Council in a century. Over the past 100 years, Portland’s population has grown more than threefold, but the size of its City Council has remained at five people (including the mayor). Peer cities, such as Denver and Boston, both have 13 council members

What is Portland’s current form of government?

How would separation of powers be balanced between the mayor and city council in the proposed ballot measure?

If passed, City Council would continue to exercise legislative power to make laws and approve the city’s budget. The Mayor would not be a member of City Council but could introduce laws and break tie votes on non-emergency ordinances.

The proposed measure includes an even number of city councilors. What would happen in the event of a tie?

The Mayor, who would be elected by the city at large, would have a tie-breaking vote.

If the measure passes, how would the mayor's veto power change?

If passed, what would be the role of the city administrator?

If passed, who would hire the city administrator, and how would their powers checked?

If passed, how long would it take to implement the proposed ballot measure?

If voters pass the proposed measure, Portland residents could expect geographic-based council elections using ranked choice voting to be implemented in the November 2024 election. The new council would enter office in January 2025 into the new form of government’s roles and responsibilities.

If passed, what would happen to current council members and the mayor?

If passed, how much would city councilors and the mayor be paid?

If passed, how would the districts be drawn, and how would we ensure equal population?

The Independent Districting Commission would ensure that each district, as nearly as practicable, would be contiguous (one connected piece), utilize existing geographic or political boundaries, not divide communities of common interest, be connected by transportation links, and be of equal population. Subsequent redistricting would be tied to census population updates every 10 years, beginning 2030. Future independent redistricting bodies would be tracked to a slightly different timeline, with the commission confirmed and in place by March 31 in every year following the census. The districting commission’s term ends upon adoption of a districting plan, which must be completed by September 1.

Snapshot of Proposed Changes to Structure of Portland City Government