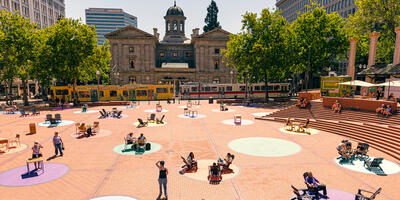 This November, Portland voters will likely decide on foundational issues for the City of Portland and its residents: the city’s form of government and elections system.

The Portland Charter Commission reached a key milestone Thursday night, preliminarily agreeing on a package of reforms to advance to voters. All 20 Charter Commission members supported the package, which would recommend three major changes:

“This proposal will make Portland’s government more accountable, transparent and effective,” said Candace Avalos, a member of the Charter Commission who co-chaired the Form of Government Committee. “It positions us to get Portland moving in the right direction and address our most pressing challenges – expanding affordable housing, mitigating gun violence, building climate resilience and improving the city’s infrastructure.”

This proposal reflects more than a year of work by the Charter Commission, an independent body appointed once a decade to evaluate Portland’s structural document and recommend changes. Since December 2020, the current commission – who represent a range of ages, backgrounds and neighborhoods – have conducted research and listened to community feedback.

More than 6,000 Portlanders have weighed in over the past year through public comment, surveys and community discussions. Partnerships with community organizations have ensured participation from a diverse cross-section of the city, including people who typically lack access to government decision-making.

Charter Commissioners have heard Portlanders’ dissatisfaction with the status quo and say there is a groundswell of support to change Portland’s ineffective form of government. Portland is the last major city in the U.S. that still has a commission form of government.

Community members want a city government that represents every area of the city through an expanded city council, elected by geographical districts.

Following Thursday’s preliminary vote, the City Attorney’s Office will draft the charter amendments. The Commission hopes to release the drafted amendments in early May.

Community members will have the opportunity to provide feedback on the proposed package of reforms during a series of public hearings in May. The Charter Commission will take its final vote in mid-June. At that point, at least 15 commissioners must say yes to send the proposal directly to Portland voters for the Nov. 8, 2022, general election.

“Portlanders recognize we are at an inflection point – this is the moment for change,” said Debbie Kitchin, a Charter Commissioner who currently co-chairs the Commission.  “A decade from now, Portlanders can look back on 2022 and feel proud that we made positive change happen.”