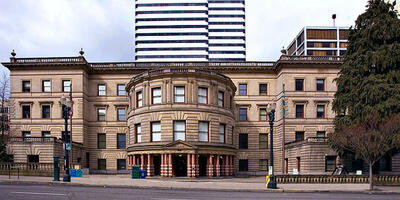 The Office of Government Relations staff maintain hybrid (remote and on-site) work schedules. Please contact staff in advance if planning to visit the office in-person.
On this page

Sam Chase is the Office of Government Relations Interim Director. Previously, Sam served as an elected member on Metro Council, Chief of Staff to former Commissioner Nick Fish, and as an executive director for housing and health nonprofits. Sam has worked as an advocate to address poverty and create inclusive communities with living-wage jobs, affordable housing, homeless services, and environmental protections. He enjoys flyfishing, hiking, camping, and most of all spending time with his very busy, blended family of six.

Nils Tillstrom has been with the Office of Government Relations (OGR) since December 2010. Prior to joining the office, he spent six years working on Capitol Hill in Oregon’s congressional delegation. Nils is most excited to be working with smart, energetic colleagues in OGR and across the City on issues related to Portland’s most vital priorities. When he is not working, Nils enjoys being outdoors with his wife and daughter.

Chido joined the Office of Government Relations in 2015 as a Hatfield Fellow and serves as the City’s conduit to Portland’s local-international community. As International Relations Director, she helps to ensure the City of Portland is poised to capitalize on opportunities for existing and new international partnerships around culture, business, education, policy objectives, as well as Portland’s sister city relationships. Chido was born and raised in Zimbabwe and couldn’t be happier to contribute in helping to make Portland a more welcoming international city for all.

Laura John, a descendent of the Blackfeet and Seneca Nations, started in her role as the City's Tribal Relations Director in 2017.  She brings over 20 years of experience working in Indian Country. She is a former State Policy Fellow with the Center on Budget and Policy Priorities and was formally the State-Tribal Policy Analyst for the Montana Budget & Policy Center, working closely with Native American state legislators and elected tribal leaders in Montana. As Tribal Relations Director, she assists the Mayor, City Council, and City bureaus strengthen relationships and coordinate overall policy development with Tribal Governments and the Portland Native American community. Laura was born and raised in Portland and is honored to have the opportunity to serve her community in this role.

As the Tribal Relations Community Liaison, Miranda works to build relationships with the urban Native American community in the Portland region and develop culturally relevant community engagement processes to support bureaus and council offices. She supports the implementation of the Tribal Relations framework across the City. She believes that creating equitable outcomes requires collaboration and grassroots engagement with the communities she serves. Miranda is a PhD student at Portland State University.

Jack joined the Office of Government Relations in 2022 after a decade working in Washington, D.C. as a senior aide within Oregon's congressional delegation. As the City's primary liaison to our federal representatives, he enjoys finding creative ways to make the important work happening in our nation's capital feel a little closer to home. Jack has a broad range of political, campaign, and policy experience that includes health care, housing, immigration, and technology issues. Having grown up in Oregon, Jack attended Gonzaga University where he majored in Political Science.

Derek joins the State Government Relations team after four years working with former Commissioner Jo Ann Hardesty first as her Policy Director and then as her Chief of Staff. He has previous government experience working as a clerk for a Multnomah County Judge as well as a Legislative Assistant for a State Representative. He has a BA in Political Science from Reed College and a JD from Lewis and Clark Law School with a focus in environmental law. In his free time Derek enjoys going to the gym, adventures with friends, and exploring Portland’s food scene.

Yvette Perez-Chavez joined OGR in September 2022, previously serving as Community Engagement and Operations Manager for Commissioner Mingus Mapps. Her role as the Associate provides support to the state team through research, writing, scheduling, policy analysis, and much more. Yvette holds a B.S. in Sociology from Portland State University and a certificate in Financial Success for Nonprofits from Cornell University. In her free time Yvette enjoys exploring new restaurants, hiking trails, and attending community events.

Kari joined the Office of Government Relations in 2022. As the Senior Research & Communications Associate, she leads strategy efforts through research, analysis, communication, and citywide coordination. Kari graduated from Antioch University Seattle with a Master's in Environment and Community, and she also holds a Certificate in Public Administration from Portland State University. In her free time, Kari devours books, nurtures the garden, plans her next coastal getaway, and watches a lot of soccer.

Haley Tortorella is the Office of Government Relation’s Research and Communications Associate. Her portfolio includes culture, livability, community, economic development, and technology. She began her work with the City of Portland in 2019 as a state lobbyist and has a background in campaign finance and policy. Through these years of experience, she continues to find service to her community and undoing past harms to marginalized groups as her passion and foundation. Outside of work, Haley spends her time exploring Oregon’s natural beauty with her companion, Zucchini, her beloved chocolate Labrador Retriever.

Susan is the Business Operations Manager in the Office of Government Relations. As part of the administrative team, she supports budgeting, financial management, human resource matters and other operational functions. Susan is driven by upholding the City’s Core Values, and focusing on fiscal responsibility. She holds a bachelor’s degree in Business Administration with a focus in Marketing. Her interests include spending time in the kitchen and being with family and friends.

Mila serves as the Executive Assistant in the Office of Government Relations. She manages the Director’s calendar, Public Records Requests, the office’s Continuity of Operations Plan and provides administrative support to the OGR team. Mila focuses on making systems work efficiently. She is a graduate of Portland State University and has a Bachelor of Arts in Anthropology. In her free time she likes to travel the world and explore trails around the Portland Metro region.