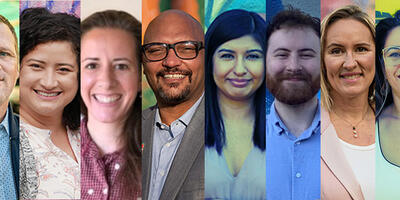 Before coming to City Hall, Katie spent 12 years building businesses and community organizing for many of Portland’s neighborhood business districts.  She built event management and equipment rental companies that manage and support events such as the Belmont Street Fair, Fremont Fest, Shamrock Run, and Portland Marathon.  Commissioner Mapps and Katie met as colleagues in 2014 while community organizing in the Parkrose Business District.  They also served together on the board of Venture Portland.  In 2019, she became one of Commissioner Mapps’ campaign managers for his 2020 bid for City Council.  Katie and the Commissioner share many of the same values, such as responsiveness, customer service, listening, and evidence-based decision-making.  In her free time, she enjoys hiking, kundalini yoga, springboard diving, and spending time with her son.

Katie is the staff liaison to Travel Portland, the Portland Film Office, and the Visitors Development Fund Board.

Shannon led Citywide performance management efforts out of the City of Portland’s City Budget Office for the last five years, where she also worked as a Financial Analyst and Hatfield Fellow.  In that role, Shannon coordinated performance reporting across all bureaus to City Council, led the implementation of the 2019 Portland Insights Survey, and managed Portland’s partnership with the What Works Cities initiative to increase the City’s capacity to use data and evidence.  Shannon has a degree in Economics from Stanford University and received a Master’s in Public Administration from the Evans School of Public Policy and Governance while working at King County Metro Transit. Shannon brings to the role a broad knowledge of City operations and unique experience leading collaborative initiatives dedicated to improving City governance. She Is passionate about the potential for data and partnerships to drive government innovation. A native Oregonian, Shannon loves spending time outdoors and is an avid cyclist. You’ll find her riding with Portland Velo and getting out on the open road at Cycle Oregon each summer.

Shannon is the staff liaison to the Bureau of Emergency Communications, Portland Fire and Rescue, Portland Police Bureau, Prosper Portland, Fire and Police Disability and Retirement, Office of Management and Finance, Bureau of Development Services, City Auditor, Bureau of Transportation, City Budget Office, and the Office for Community Technology.

As a first-generation child of immigrants and daughter of a US Navy family, Michelle has lived all over the United States and internationally.  After studying Political Science and International Conflict Resolution at San Diego State University and American University in D.C. respectively, along with her student activism, Michelle was committed to serving her community.   She began her career working in social and environmental justice on the San Diego/Tijuana border region in the early 2000s, living and working on both sides of the border.   After five years directing a small youth-focused non-profit in Hillsboro, she joined Portland Parks in 2014.   For three years she ran the Friends & Partner program before transitioning to an Operations Supervisor at the office Community & Civic Life. While working, Michelle has remained connected to the Latinx community through volunteerism, serving as vice-chair of the Latino Leadership Council of Washington County as well as previously serving as co-leader in the City of Portland affinity group, LatinxPDX.

She enjoys spending time with her family riding their bikes around their neighborhood and cheering her kids on at their PCU soccer games and supporting their favorite teams the Thorns and Timbers.

Michelle is the staff liaison to the Bureau of Environmental Services, Portland Water Bureau, Portland Utility Board, Bureau of Hydroelectric Power, Portland Parks and Recreation, City Attorney, City Ombudsman, Office of Community and Civic Life, Bureau of Emergency Management, and the Office of Equity and Human Rights.

Goldann is a proud lifelong Oregonian who grew up in Northeast and East Portland and graduated from Madison High school then Lewis & Clark College. While at Lewis & Clark, she interned in the Mayor’s Office and co-lead the Summer Youth Connect program as an AmeriCorps Vista volunteer and focused on education accessibility for opportunity youth in Portland. She graduated with a degree in Sociology and Anthropology with a semester study abroad in Cuenca, Ecuador. Over the last 10 years, she has worked in local government starting as an intern in a former Mayor’s office and then as a staffer for former City Commissioner Amanda Fritz. She has also committed several years to the non-profit sector as a former community engagement advisor at Unite Oregon, a TEFL licensed English Teacher in Ecuador, as well as, worked with survivors of violence and abuse at the National Crime Victim Law Institute.

Most recently, she returned from her assignment in Rwanda with the US Peace Corps where she lived and taught English in a rural village. She is passionate about applying social policy and equity frameworks to make government better. In her free time, she enjoys going to the Gorge, traveling to new cities, going to Powell’s, and spending time with her friends and family.

Goldann is the Policy liaison for the Portland Water Bureau, Portland Utility Board, Strategic Planning and Opportunities Team, the Portland Housing Bureau, and Tribal Relations. She is also the point person for all items related to City Council.

Jackson is a sixth-generation Oregonian with ties ranging from Pendleton to Southeast Portland. Since the age of 17, he followed a lifelong passion and joined a number of food trucks and restaurants, including world-famous Portland institutions like PDX Sliders and Kenny and Zuke’s. These years of service experience put him in close contact with a wide variety of people from all over the city, state, and country. During his time at the University of Oregon, Jackson helped supervise the student wing of the University of Oregon Foundation. Here, he learned the value of his skills as a communicator and used them to secure tens of thousands in donations for academic programs, scholarships, and student services across campus. He took a particular interest in the Pathway Oregon scholarship program and made it a goal to support this needs-based scholarship fund as much as he could. Jackson believes that education should not be closed off to those who cannot afford it.

Since he no longer works in restaurants, Jackson loves spending his free time cooking elaborate and delicious meals for anyone patient enough to wait for him to get his food just right (He promises it is worth the wait). He also enjoys hiking, biking, sitting in the shade, and playing tour guide for anyone new to the city.

After teaching in an early childhood education facility for almost 21 years, 2020 shifted my interest and skills towards admin work.

I worked as an office manager at a physical therapy clinic for two years. That move was similar to working with children; I fit right in helping people from numerous cultural backgrounds.

I enjoy hanging out with my siblings and doing almost anything, like bowling, softball, game nights, movies, singing and listening to music. Since I have no children of my own, my four nephews are my world.

I’m taking a break from a Youtube page I started for young children in 2018; I plan on recording again to keep the little ones happy with songs, book reading, and story-telling.

I’m excited to be here at City Hall, doing all the things I enjoy the most; one of them is helping people.

I’m the middle child of 5(6) wonderful adults(now), born in a very musically inclined household; both parents migrated from Haiti, which makes French Creole my first language.

Adam is a lifelong resident of Northeast Portland. He began his career managing houseless shelters and subsidized housing for men in inner Southeast Portland. Later, he worked as Emergency Services Manager for a family shelter system in East Portland. Most recently, he served as Executive Director of the Northeast Coalition of Neighborhoods, where he was proud to amplify community voices and promote civic engagement. Adam believes strongly that all people are inherently good, Portlanders are resilient, and that the Blazers will win the championship this year. He loves hiking with his wife, running the Esplanade with his dog, and doing art projects with his daughter.

Adam is the staff liaison to the Joint Office of Homeless Services and the Bureau of Planning and Sustainability.