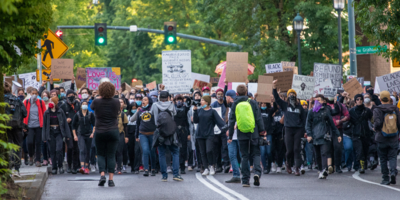 Print a PDF of the report and appendix

Last year was a challenging one for police accountability. The COVID-19 pandemic altered the operations of Independent Police Review (IPR) in March. Staff worked remotely, taking complaints and conducting investigations, and switched to virtual platforms for meetings and interviews. In the summer, local protests sparked by the murder of George Floyd in Minneapolis, Minn., led to an extraordinary increase in use-of-force incidents and complaints about the Portland Police Bureau. This increase and the complexity of the complaints received overwhelmed the accountability system. The U.S. Department of Justice found the City out of compliance with four sections of the ongoing settlement agreement, including timeliness of investigations and issues related to uses of force during street protests and force reporting. In November, Portlanders voted to implement a new system of police oversight, which eventually will be defined by a community board and City Council. The Citizen Review Committee conducted its meetings virtually for most of 2020.

Independent Police Review was created in 2001 as a division in the City Auditor’s Office. As the City’s civilian police oversight agency, IPR:

This annual report highlights unique occurrences, challenges, and lessons learned from 2020. An appendix at the end of the report summarizes case handling decisions and outcomes. Detailed information about cases and allegations is available on IPR’s website.

Police response to protests led to surge in complaints

Events in 2020 highlighted the inadequacies of the criminal justice system, especially the harmful effects of some policing practices and policies. Racism and disparate enforcement are closely tied to the origins of policing in America, and their legacy extends beyond the behavior of individual officers.

In the wake of George Floyd’s death in May 2020 under the knee of a Minneapolis, Minn., police officer, community members in Portland organized hundreds of large, peaceful demonstrations and protests to demand changes in policing. Other protests had a spectrum of messages, and some ended after individuals damaged property, set fires, and hurled objects at officers, prompting commanders to call them unlawful assemblies or riots. Interactions between protestors and officers led to a surge of complaints to IPR during the late spring and summer.

There are eight reasons in City Code that outline when a complaint can be closed after an intake assessment. The most common reason for protest-related cases was that the officer’s conduct did not violate a Bureau directive (12), so there was no misconduct to investigate.

The high volume of contacts we received about law enforcement’s response to protests exceeded the limits of the IPR complaint intake process. We received more than 3,000 communications from community members upset with police policies or actions they had learned about from the news or social media and City Council’s budget decisions for the Police Bureau. The majority were not about officer misconduct, and therefore were beyond the scope of IPR’s role and authority.

The extraordinary increase in complaints over a short period of time swamped IPR’s ability to complete the intake process and investigations within its established deadlines. Addressing the caseload was further complicated by a staffing shortage and adjusting to working remotely during the COVID-19 shutdown. The dynamic nature of protests also made it more difficult to gather accurate information and identify officers and witnesses in a timely manner.

Complaints typically start with a community member providing IPR the details of an interaction they had with police. By contrast, many protest complaints in 2020 started with community members who were not directly involved in an interaction sending IPR a video of an incident or IPR investigators reviewing videos that appeared in the news and on social media.

Multiple police agencies sent officers to Portland to help during the protests, so the first step in the investigation often was to determine if officers in the videos worked for the Portland Police. City Code does not allow IPR to investigate the conduct of officers from other agencies even when they are operating in Portland.

There was no comprehensive list of which agencies participated or who was working on any given night. Officers were allowed to cover their name tags and were often dressed in similar uniforms that made it difficult in the darkness of the videos to tell which agency they worked for.

After establishing that an officer worked for the Police Bureau, investigators needed to identify the officer. Sometimes a video captured the two-digit identification number on an officer’s helmet, which investigators then could match to a roster. If no number was visible, investigators requested all reports produced from a night’s protest to see if any matched the actions captured in a video.

IPR’s lack of direct access to police records and data systems – while always a problem – became a rolling burden given the volume of investigations required by the police response to the protests. Investigators submitted requests for incident records to the Bureau’s Records Division. Reports, including those that documented uses of force, were often delayed while they underwent reviews by Bureau supervisors. When IPR investigators eventually received records, they had no way to know if the Bureau had provided all relevant records. The Bureau did not notify investigators when new records relevant to their investigations became available.

Officers also often took similar actions at the same time, such as firing less-lethal weapons into a crowd or forming a line and using batons to move groups. The officers did not specifically describe in their reports who was struck by the munitions, which made it difficult to match an officer’s actions to a particular complaint.

Workload surpassed capacity in July and never returned to a manageable level. By the end of 2020, investigators carried an average of 6.5 intakes and 2.7 full investigations per person, about 2.5 times the optimal workload per investigator.

The U.S. Department of Justice found in January 2020 that the City was in substantial compliance with terms established in the Settlement Agreement. A section of the agreement obligates the Police Bureau and IPR to complete the accountability process within 180 days.

The City fell out of compliance in November 2020 with four sections of the settlement agreement, including the timeliness standard. Up to 83 percent of IPR’s investigations went over the allotted 180 days in the first, second, and third quarters of 2020. The Auditor’s Office has taken steps to ensure IPR can work through the case backlog and achieve substantial compliance again.

Police oversight focused on individual acts of misconduct alone cannot fix the problems with modern policing. Many issues and actions that frustrate or confuse community members do not meet the threshold of misconduct because they do not violate Bureau policy, which is the criteria on which misconduct is judged. Individual complaints are helpful in identifying trends and exposing gaps in Bureau policies. IPR watches for such trends or single incidents that may indicate an opportunity for systemic improvements in the Bureau.

Last year IPR pledged to focus on areas to protect our independence and make the oversight process more effective and equitable.

Promote Mediation
Our goal to resolve more cases through mediation in 2020 was hindered by the move to virtual meetings. IPR arranged one virtual mediation between a complainant and an officer.

Make More Investigative Information Available to the Public
State law and labor contracts limit information that can be disclosed about police misconduct cases.

IPR published a case summary dashboard within these constraints to show the types of cases investigated and common outcomes. We also released the investigation of Portland officers involved in the arrest of Michael Fesser at the request of West Linn police. It was later learned that Mr. Fesser was the subject of a racially based retaliation scheme by West Linn. The Fesser investigative report is available online.

Improve Access to Bureau Systems and Data
Access to Bureau systems and data took a step backward in 2020 when the Bureau required IPR to use a public records request portal. This caused delays in report acquisition and investigations. The Auditor’s Office is pursuing a Legislative change to include civilian oversight agencies in the definition of entities that can directly access certain types of law enforcement data.

Examine Equity
IPR staff participated in Results-Based Accountability training. We used the tools we learned to revamp our equity plan and incorporate root-cause analysis into our strategies. This changed the way we think about our services and enabled an outcomes-based approach.

The Citizen Review Committee is an 11-member volunteer body that hears appeals when a community member or officer disagrees with a police supervisor’s decision about their complaint. The group also works on policy issues and engages with the public about police matters.

The committee heard appeals of three cases in 2020. It challenged a finding in one, recommending that the supervisor change the result from unfounded to not sustained. The Chief agreed with the Committee’s recommendation in that case.

The Committee released a statement in response to the killing of George Floyd and worked on a crowd control report for release in 2021. Members of the Committee also held recurring meetings with elected officials and the Committee Chair participated in monthly meetings with the chairs of different advisory councils.

The Committees’ statement on George Floyd is available online.

View an appendix to this report that summarizes case handling decisions and outcomes.