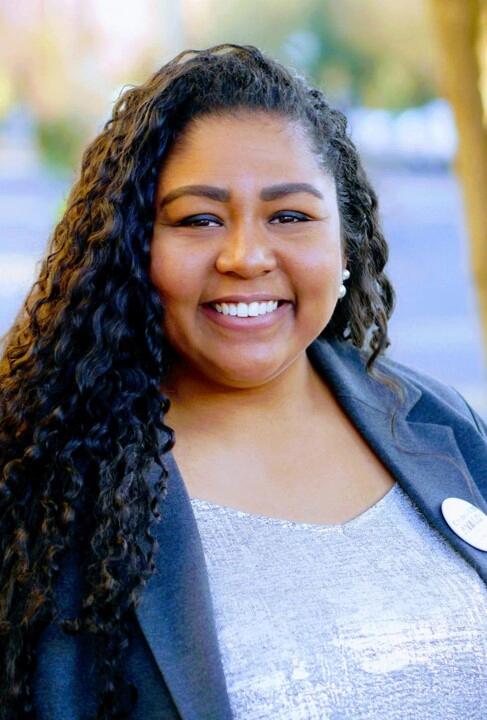 Ms. Candace Avalos received her Bachelor of Arts degree in Modern Foreign Languages, with a focus on Spanish and Italian, and Master of Education degree in College Student Personnel Administration from James Madison University. Originally from Sterling, Virginia, she moved to Oregon in 2013 for her current position at Portland State University as the Coordinator of Student Government Relations and Greek Life Advisor. In this position, she provides education, support, and advising to student leaders and advocates while helping them navigate university and government bureaucracy. Prior to her career in student affairs and higher education, she worked in K-12 education teaching English as a Second Language. She lives in NE Portland and her hobbies include dog sitting and cooking new recipes from the show Top Chef.  Appointed September 2017

Ms. Shaina Pomerantz is a California native with deep familial roots in Portland.  Her maternal grandparents, Charles and Johnnie Maxey settled in Portland, Oregon in the 1940s after fleeing harsh Jim Crow laws in East Texas. Through their guidance and love, Shaina was exposed to community activism and the importance of education, advocacy, and civic engagement.  She followed her parents, both alumni of Pacific University, into the field of education where she taught violence prevention and conflict mediation, reading, writing, and humanities.  She worked as an educator for over fifteen years and had the pleasure of teaching in the Bay Area and New York City.  She has worked in the Texas, Louisiana, and Oregon State Legislatures and served as Chief of Staff to Representative Hernandez in the Oregon legislature.  She is the COO for RACE TALKS: Uniting to Break the Chains of Racism, a monthly community dialogue forum founded by her mother, Donna Maxey, that teaches Portlanders how to discuss issues through the lens of race and racism. Shaina received a Bachelor’s in Organizational Behavior from the University of San Francisco; Master’s of Science in Organizational Leadership from Mercy College; and J.D. from Southern University Law Center in Baton Rouge, LA. Appointed April 2020

Mr. Yume Delegato was born and raised in Northwest Portland and has worked in Portland’s non-profit community for over two decades, most recently as the President and Artistic Director of PDX Pop Now!, a nonprofit dedicated to making local music accessible to all Portlanders. Prior to joining CRC, he served as a community volunteer on the CRC’s Crowd Control and Use of Force Workgroup and on the Salmonberry Trail Intergovernmental Agency’s Segment Review Committee. In addition to his non-profit work, Yume manages an insurance agency and enjoys hiking and reading about Pacific Northwest culture and history. Appointed April 2021

Ms. Julie Falk is a graduate of Swarthmore College where she majored in English Literature and Art History. She is the former executive director of Bitch Media and is president of the board of Women’s Foundation of Oregon and the Chair of Board of Trustees of the French American International School. She previously served as executive of Center for Health Justice in Los Angeles and the Prison Media Fund in Cambridge, Massachusetts. Originally from Kentucky, Julie moved to Portland in 2006, where she lives with her husband and two children. Appointed February 2015

Mx. Sylvan Fraser grew up in Western Washington before moving to Portland in 2008 to begin studying at Reed College. They graduated in 2012 with a B.A. in Linguistics and temporarily relocated to California to earn their J.D. from Berkeley Law. They currently serve as Staff Attorney at the national legal non-profit interACT: Advocates for Intersex Youth, and live in Southeast Portland with their loving partner, two cats, and a dog. In their free time they sing in two choirs, host tabletop game nights, and cook elaborate vegetarian meals. Appointed June 2019

Ms. Amanda Greenvoss has a background in Environmental Education and is currently studying for a master's degree in Teaching English to Speakers of Other Languages at PSU. She volunteers teaching English to immigrants and refugees through Torus and PCC, and delivers food weekly to houseless neighbors through Free Hot Soup. She lives in Southeast Portland with her husband and two kids. Appointed April 2021

Mr. Gregg GA Griffin received his Bachelor of Science degree in Education, focusing on curriculum Development from Southern Illinois University, and Dual Master of Computer Information System /Finance degree from Webster University while serving in the United States Navy. Originally from Chicago IL, he moved to Oregon in 1998 to pursue a Systems Analyst position with Regions Blue Cross/BlueShield. Inspired by Portland's advocacy spirit, he has volunteered with several local organizations, including OPB/KMHD, Portland Street Medicine, and Trillium Family Services. Currently, Griffin holds the position of Board President at Hand Up Project, an organization that addresses systemic issues around the unhoused community, for which he has served on the board  for the past five years. Against Portland's backdrop of diverse culture and natural beauty, he continually fosters his interests in social justice, physical fitness, and the study of music and local jazz artists. Appointed April 2021

Ms. Jessica Katz founded the Family Preservation Project at the Coffee Creek Correctional Facility in 2003 which is the subject of the documentary film, “Mothering Inside.” Prior to founding the Family Preservation Project, she worked with the Children’s Aid Society in New York to create programs advocating for the rights of parents involved in the child welfare system. She also taught legal education workshops at prisons throughout New York through Columbia University’s Prisoners and Families Clinic. Jessica has presented at local, national and international conferences, has been recognized as a Re-unification Hero by the American Bar Association, and is an Alumna of Emerge Oregon. Recently she was instrumental in making Oregon the first state to legislatively adopt a “Bill of Rights for Children of Incarcerated Parents.” Jessica is honored to work alongside women and children who have been most directly impacted by our criminal legal system towards more just and humane solutions. Appointed April 2021

Mr. Vadim Mozyrsky was born in Kiev, Ukraine. He graduated with a bachelor of arts degree from the University of Texas and a juris doctorate degree from the University of Texas School of Law. After law school, he clerked for judges in state, federal, and international courts. He practiced in litigation and mediation before his current employment with the U.S. government. Mr. Mozyrsky is active in the Portland community. Appointed January 2018

Ms. Kyra Pappas received her Masters in Nursing Education from IUPUI- Indiana University School of Nursing. She has been a higher ed professional, working as the Director of Multicultural Services and Student Leadership for the past 10 years and is a Nurse Educator.  She focusses her work with colleges, hospitals, and community organizations on educating about how to create equitable, inclusive, and empowering environments and structures. Appointed April 2021

Mr. Taylor Snell grew up in Reno, Nevada. He received his B.A. from the University of Nevada, Reno, in 2013. He went on to be an AmeriCorps volunteer at a food bank in north Seattle. His experience in AmeriCorps led him to pursue public interest law at Lewis & Clark in Portland. While obtaining his J.D., Taylor worked in the Criminal Justice Reform Clinic and the Public Interest Law Project. After graduating, Taylor clerked for Judge Lininger in Clackamas County, and currently works as a public defender in Hillsboro. In his free time, Taylor can be found trail running, or eating deep-fried vegan food. Appointed April 2020