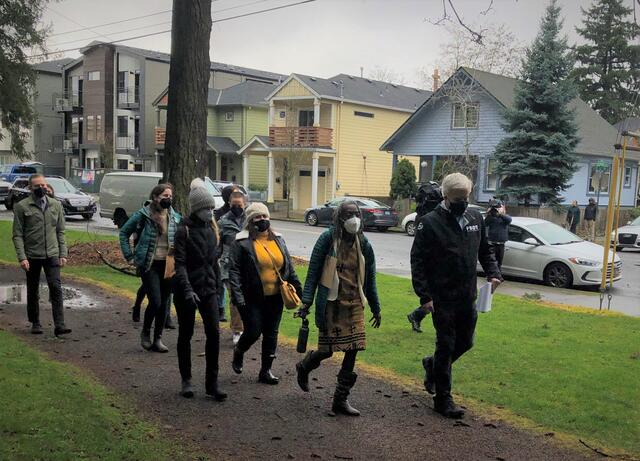 “Mt. Scott-Arleta is a diversifying neighborhood including many households with young children that enjoy walking to Mt. Scott Community Center,” said Mt. Scott-Arleta Neighborhood Association Chair Matchu Williams. “The sudden rise in gunfire and reckless driving last year shook the community and spurred on calls for safe streets where neighbors can gather together. The pilot project gives us hope for future investments into safe streets in Mt. Scott-Arleta and citywide.”

Working with neighbors to implement their idea, the Portland Bureau of Transportation installed a total of 18 temporary, low-cost traffic barrels within a 6x6 block radius where the combination of gun violence and related speeding were most prominent.

“My office got involved in this neighborhood after a group of community members reached out to my office with an idea in response to the rapid uptick in violence in the area,” said Commissioner Hardesty. "Neighbors were observing high-speed traffic from gun violence incidents in the area, further endangering community members beyond shots fired to threats of traffic violence as vehicles sped through slip lanes and nearby residential streets. I directed my staff and PBOT to collaborate with the local community as well as bureaus across the city to pilot a holistic violence mitigation effort.” 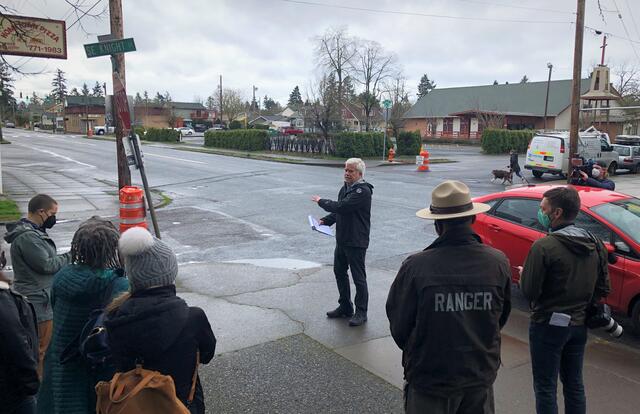 “To put an end to this rise in gun violence, we will need a combination of short-term mitigation and long-term solutions that address the root causes of violence. We need an all-hands-on deck, holistic response.” said Commissioner Hardesty.

Summarizing the work between October – December of 2021 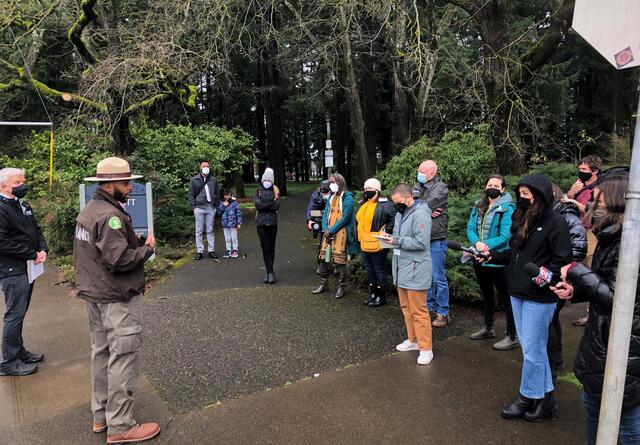 “A wise elected leader who I greatly respect used to say that everyone has a role in creating a safe and thriving community,” said Commissioner Rubio. “The Mt. Scott community and SE Uplift have done a great service to the broader Portland community, and I’m grateful for their advocacy. As Portland Parks and Recreation Commissioner, I’m open to hearing from other parks-adjacent neighborhoods interested in similar pilot projects.”

“The Portland Police Bureau was happy to partner with Portland Parks & Recreation by having officers walk in Mt. Scott Park with rangers," said Deputy Chief of Police Mike Frome. "Efforts like this demonstrate how the City of Portland can address problems like gun violence in a holistic manner, rather than treating it as a purely police issue.  In the months ahead, the Police Bureau looks forward to continued partnerships with Parks & Recreation, the Bureau of Transportation, and any other City Bureau that has innovative ideas on how to improve community safety. In addition to the work within Mt. Scott Park, the Portland Police Bureau conducted five focused missions in the Mt. Scott-Arleta Neighborhood area between November 2021 and January 2022 resulting in sixty-three custodies and the seizure of three firearms.”

“This community driven approach with bureaus working collectively together to support them is an excellent framework for the future as we work to solve safety issues across Portland,” said Community Safety Transition Director Mike Myers. “Continuing this pilot project will allow the team to properly evaluate the program’s effectiveness over the next several months.”

“To be clear, this is a short evaluation period and volatile data set that we will need to continue evaluating and adapting to what it teaches us. We have not implemented this pilot for long enough to determine this a success, but the early results are promising.” said Commissioner Hardesty. “I know people are scared. The amount of gun violence we have witnessed last year and so far in 2022 is unacceptable. From the data I have seen and the conversations I have had, I want to continue this pilot in Mt. Scott and beyond. I look forward to working with my colleagues in the upcoming budget cycle to see just what that looks like moving forward.” 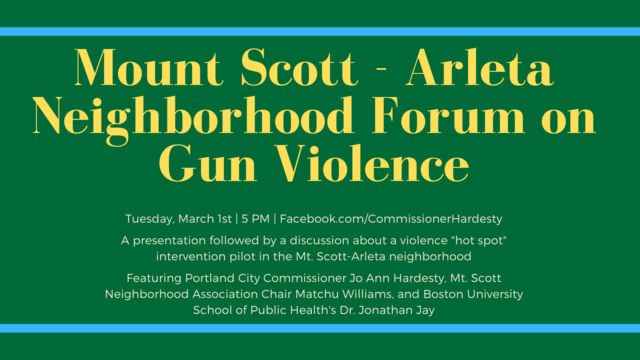 What: A review of results from the first 3 months of data collected following the violence hot spot intervention from October - December of 2021 in the Mt. Scott-Arleta neighborhood. This includes a panel discussion featuring Mt. Scott-Arleta Chair Matchu Williams, Boston University School of Public Health’s Dr. Jonathan Jay, and City staff who have worked on this pilot. There will also be an opportunity for neighborhood participants to ask questions and provide commentary.

When: Tuesday, March 1st at 5pm

Where: The virtual forum will be livestreamed at Facebook.com/CommissionerHardesty