Following the latest budget allocation that was made available in July, Portland Street Response has been rapidly hiring new staff, and now has hired over 50 employees. When PSR first launched as a pilot in the Lents neighborhood, they had a total of 4 people working on response.

The next cohort of hires will begin training this month. PSR is on track to begin 24/7, citywide coverage by the end of this year.

This follows several exciting updates from this Summer and early Fall, including:

Earlier this October, more than two dozen local elected officials, government staffers, and community leaders met with the Portland Street Response to learn from the program and identify best practices that can be adapted in their localities.

With growing awareness and popularity, more localities are working to implement these programs. Portland Street Response is one of only two citywide programs that is housed within a local government department – which experts and advocates say better promotes the creation of high-quality jobs and pay equity.

The learning experience was hosted by Commissioner Jo Ann Hardesty and organized by Local Progress and the Local Progress Impact Lab, which bring together local leaders, partners, and issue experts to build the knowledge, skills, and leadership needed to advance racial and economic justice at the local level.

“Portland Street Response is one of the most innovative and successful new programs in Portland’s history, providing the first major update to our first response system in almost 100 years. As PSR continues to expand, we continue to ensure the most effective first response is sent to the right 911 call.” said Commissioner Hardesty. “Portland Street Response’s success is inspiring the whole country, and that is something all Portlanders can be proud of. It was an incredible honor to host over two dozen elected leaders from around the country that want to bring Portland’s model to their home.” 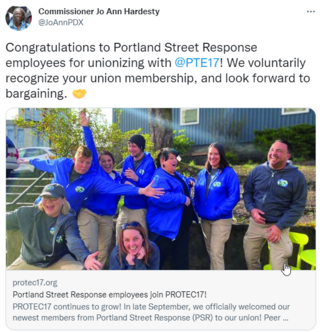 One of the primary reasons Commissioner Hardesty adopted a model of embedding Portland Street Response within city government as opposed to contracting the service out was hearing concerns from workers in the field of mental and behavioral health who felt like this growing and needed service is not compensated for the difficulty and emotional toll of the work. With a unionized workforce, Portland Street Response is providing an example of how we can dignify this important field of work with the wages and benefits our workers deserve.

Due to supply chain issues, it took over a year for us to get our specially designed Portland Street Response vans, but as of this September they have hit the road! You can learn all about the new PSR vans by watching one of our mental health crisis responders provide a tour on how these specialized vehicles help the team hit the streets and connect with folks. 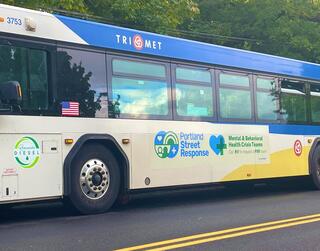 The last independent evaluation of Portland Street Response from Portland State University's Homeless Action Collaborative reported that we need to do a better job of advertising our new 911 response option.

One aspect of this awareness campaign includes advertisements on TriMet buses and billboards throughout the City of Portland, which launched in September.

A recent antidote was shared from a PSR responder, who was able to resolve an issue at a local business. When the business owner was asked how he knew to call 911 and request Portland Street Response, he pointed to a billboard above his shop.

The primary mission of Portland Street Response is to offer an unarmed response to 911 calls regarding people experiencing a mental or behavioral health crisis. Many of the calls PSR responds to would have previously received a response from Police, Fire & Rescue, or received no response at all.

What that means is that as Portland Street Response continues to grow, we continue to free up resources for other first responder bureaus.

Recently a representative from Portland Police Bureau credited PSR expansion as part of the reason they were able to deploy additional police patrols in Old Town.

As reported by KATU: "We made some changes at Central Precinct in order to accommodate the need for staffing, which is a huge issue. So, that was kind of a heavy lift, but we were able to do it and so, here we are. We’re going to start it up. It’s been in the works now for several weeks, maybe a couple months," Crooker said. Crooker said this was made possible as Portland Street Response grows, and Old Town came up as an area of need while his team reviewed staffing throughout the year.”

Optimism for Future Medicaid Reimbursement, Which Could Save Portland Millions of Dollars

Thanks to the work of Senator Ron Wyden, President Biden’s American Rescue Plan includes Medicaid funding for crisis response programs like Portland Street Response. We remain in discussion with the Oregon Health Authority to ensure that PSR can receive this Medicaid reimbursement, potentially saving millions of dollars from the City of Portland’s budget.

Commissioner Hardesty had the opportunity to sit down with KATU’s Genevieve Reaume to discuss this exciting development.

"If it wasn’t for both CAHOOTS and Portland Street Response already operating on the ground, [Wyden] would never have been able to get the federal government to do their first investment of federal dollars... we were the proof that it worked," Hardesty said.

PSR says it's hoping this money will help fund its work.

"We are excited for the potential to receive Medicaid reimbursements and hope that The Oregon Health Authority can work with us to make this a reality," A PSR communications manager said in an email to KATU.

Hardesty, too, says she'll push for the funds to support PSR.

"First we had to fight to just imagine it, right? We had to fight to test it. Now, we have it authorized citywide," Hardesty said. "It would give me more confidence knowing even if there was reimbursed 50%. that would save significant general fund dollars that we could then invest in, I don’t know, mental healthcare, mental health beds, things that we desperately need."

Upon initial expansion citywide in March, the call demand for PSR far exceeded our expectations. As a result, Portland Street Response temporarily scaled back their weekend hours and instituted a que system to ensure no one was waiting too long before receiving a response to their 911 call.

KATU news provided good coverage of the situation in this June report.

Next Independent Analysis Coming in December

Those reports can be found online here: Portland Street Response

The next report will be produced and available for review this December. We look forward to the analysis which will continue to inform the development of Portland Street Response. 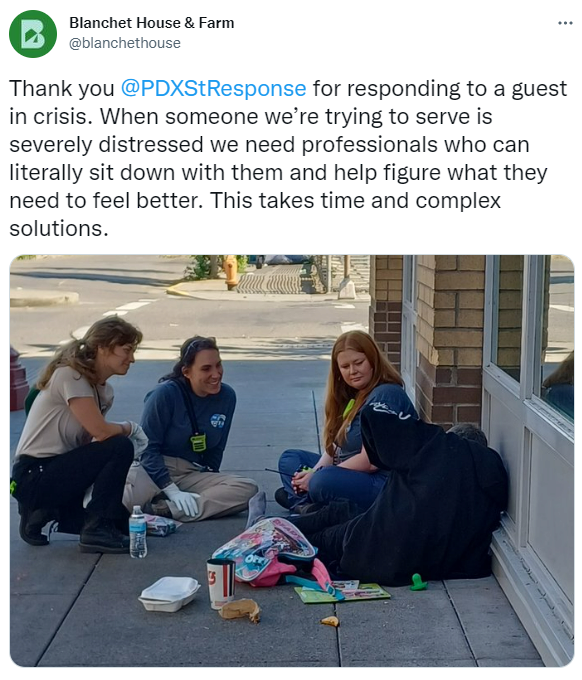