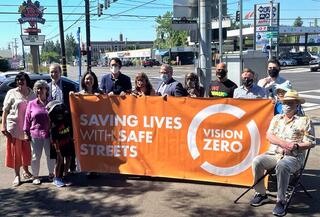 Recently Portland reached a record number of homicides due to gun violence, an incredibly tragic reality that has brought great harm and fear to our City. Another devastating development recently reached is a record number of traffic fatalities on our streets, which has unfortunately received nowhere near as much attention or investment.

The global pandemic and it’s destabilizing effect has heavily contributed to a nationwide epidemic of traffic deaths. Transportation Secretary Buttigieg has called traffic fatalities in 2021 a national crisis, with an increase in speeding, lack of wearing seatbelts, and reckless behavior leading to increased traffic fatalities. A record number of traffic fatalities was reported to USDOT in the first half of this year. For Portland-controlled streets to have avoided this national increase shows that we are making a difference, but these numbers are still not acceptable, and we must do better.

I worked hard with a coalition of statewide elected leaders and community advocates to secure the transfer of 82nd Ave from state to local control with a $185 million state and local investment that will take a huge step forward in building a road that meets the needs of East Portlanders and other residents throughout the region. This is a great start and work I am proud of, but we need to build on this collaboration. We must continue to bring all government jurisdictions together to make coordinated regional investments and bring more streets under local control with proper state investment, because that leads to safer outcomes.

Since becoming the Transportation Commissioner less than a year ago, my top focus has been on life safety related to all modes of transportation. As we saw traffic fatalities rising earlier this year, I introduced and passed an emergency budget amendment that allocated $450k in rapid safety improvements on our highest crash corridors. Almost all those investments will be completed by the end of this year, except where supply chain issues have caused delays. I believe these improvements will lead to better outcomes moving forward. Those completed projects include:

One intriguing data point is that since PBOT began piloting left turn calming infrastructure a few years ago, there have been no pedestrians killed at those locations. This budget amendment increased our investment in that pilot, and it is data driven outcomes like this that will shape future investments. I’m also thankful to see that so far this year, there have been no fatalities of bike riders.

PBOT is a bureau with billions of dollars in backlogged maintenance. When I learned about unanticipated one-time funds available during this Fall BMP, it was the advice of the budget office and my preference to set half of those dollars aside for backlogged maintenance projects. My colleagues didn’t agree, and I had to fight to get at least 10% of those funds set aside to be split between safety improvements and maintenance work, which isn’t nearly enough to address this catastrophe. Separately, I am appreciative that in this budget I was able to expand funding for PBOT’s Safe Routes to School program.  I’m also eager to get more guidance about how the recently passed Federal infrastructure bill may benefit Portland’s infrastructure needs.

On the issue of traffic enforcement, I agree with the many constituents I hear from calling for more speed safety cameras. In order to deploy more, we must first change a state law that requires sworn police officers to process these tickets, usually while being paid overtime. Not only would changing this state law allow us to install far more speed safety cameras throughout Portland, but it will save PPB money and free up resources so more police can be out in the community on patrol and responding to 911 calls instead of stamping tickets. I will be working with our government relations team to change this state law during the next legislative session. I’m asking Chief Lovell and the Portland Police Bureau if they will be partners in advocating for this change.

Vision Zero is a goal and a work in progress. Had we not made the investments we did in recent years, I believe the traffic fatalities would be far worse on PBOT controlled roads. That doesn’t take away from the unacceptable number of tragedies that have occurred on our streets this year. My priority will continue to be securing investments on high crash corridors where most traffic fatalities are occurring, and I’ll be looking at the upcoming budget for opportunities for more targeted investments that can make our streets safer for all modes of transportation.