Welcome to Civic Life on Portland.gov!

We are currently in the process of migrating all of our content to this new website. If needed, you can access the old Civic Life homepage here.

News Article
The Office of Community & Civic Life to administer the largest city-led grant initiative in the U.S. that prioritizes racial and social equity
Published
May 26, 2021 4:25 pm

City Council directed the tax to be used for three purposes:

The funds will aid, strengthen, and advance restorative justice, community reinvestment, and wealth creation for Black, Indigenous and people of color (BIPOC) who have been disproportionally impacted by more than 80 years of cannabis prohibition laws.

SEED Initiatives are administered by Civic Life’s Cannabis Program and is a vehicle for single-source monitoring, measuring, and reporting on Portland’s cannabis tax revenue. The program is the largest and first equity-centered regulatory program in the country that is city-led, and has become the leading regulatory framework operationally designed to deliver on the reparative and restorative potential of the cannabis legalization movement.

Arrest rates for marijuana possession and sales have decreased since Oregon legalized cannabis in 2014, but the state is still disproportionally punishing Black residents with cannabis-related crimes. In fact, while Black and white people use marijuana at similar rates, the American Civil Liberties Union (ACLU) reported that in 2018, a Black person in Multnomah County was 2.6 times more likely to be arrested for marijuana possession than a white person. The impact of an arrest or incarceration can have a devastating lifelong impact—affecting job opportunities and housing security and more. SEED Initiatives were created to provide opportunities and support to communities who have suffered generational harm based on the impact of past cannabis prohibition.

Oregon is making great strides in its decriminalization of cannabis use and possession. According to the ACLU’s report “A Tale of Two Cities”, Oregon has among the lowest racial disparities for marijuana-related arrests in the nation—Black people in Oregon are 1.8 more times likely to be arrested for cannabis. But racial disparities for arrests still exist. The table below shows data from 2018 complied by the ACLU: 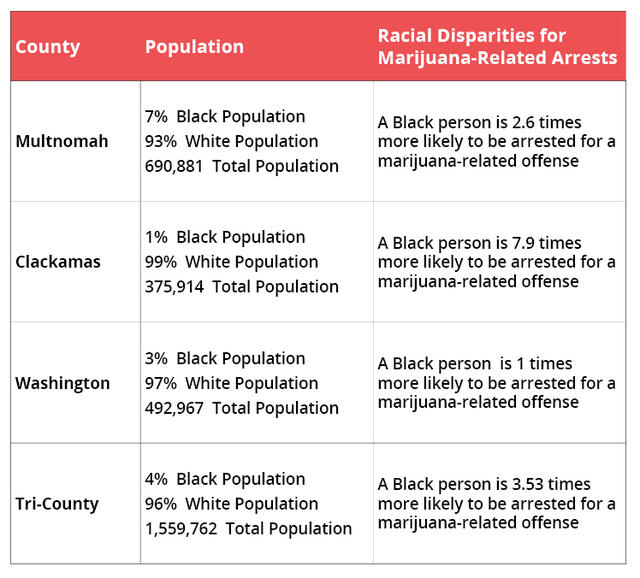 “I’m proud of all the work and the beneficial outcomes we saw with Council approving a new round of community grants through Civic Life’s historic SEED Initiatives,” said Commissioner Jo Ann Hardesty. “This is vital work as we dismantle inequitable systems locally – in this case policies that historically punished Black, Indigenous, and communities of color for possessing and using cannabis. Through SEED Initiatives, we are rebuilding new systems that will ensure Portlanders previously harmed by systemic racism will financially benefit from new policies. This is a historic moment for Portland as we transform our government to build equitable policies and programs for all communities, especially communities of color who continue to experience systemic racial inequities.”

In the U.S., the use and possession of cannabis remains illegal under federal law for any purpose, by way of the Controlled Substances Act of 1970. However, the recreational use of cannabis is legalized in 17 states, including the District of Columbia, the Northern Mariana Islands, and Guam.

During fiscal year 2021-22, SEED Initiatives will receive 54% of the cannabis tax revenue. Up until the City’s last fiscal budget, the Portland Police Bureau (PPB) received a portion of the tax under the umbrella of public safety. However, in response to community’s input, PPB is no longer receiving funds from the Portland Cannabis Tax and the City has instead doubled their investment directly to community through SEED Initiatives.

Their program is an introduction to various construction trades and provides 288 hours of training in which they are paid. The program also includes financial literacy and soft skills training. Graduates walk away from the program with a flagging credential, hands-on skills, first aid training, and an Occupational Safety & Health Administration (OSHA) 10 certificate. The program offers direct entry into full apprenticeship programs, labor unions, or fulltime careers as linemen, laborers, and HVAC/sheet metal workers.

“Our program gives folks access to exciting new opportunities in the trades,” Director of Employment and Training Megan Bell explained. “Construction is an incredible opportunity for the young adults we work with, especially those that have a prior arrest or conviction that may impact their employability in other sectors. I would like to see more apprenticeship programs pledge a commitment to hiring graduates from pre-apprenticeship programs.”

“The program is an opportunity to meet people where they are and helps them learn something new while changing the trajectory of lives,” said Director of Development Ruben Fonseca. “Our program not only offers training in the construction trades, but it provides wrap-around services that are needed for everyone to succeed, such as providing childcare, remedying housing or food insecurity, assistance in earning a driver’s license, setting-up a bank account and taking financial literacy classes for long-term financial independence.”

Brandon Lane found new opportunities after graduating from the Construction Pre-Apprenticeship program in 2019. He is now employed with O’Neill Electric, Inc. earning a living wage and supporting his biggest motivator, his son. “I just want to work, be good at my job, and help someone else take the path that I took,” said Lane. “Having a good job as an electrician, will make sure that my life is stable and consistent. Being an electrician is a trade I can take into any state…and it will make sure that I always have work available.”

You can find a complete list of grant recipients here.

You can learn more about SEED Initiatives here.

Join us for a virtual press conference to learn more about the City's Cannabis Program and SEED Initiatives.

WHO: City of Portland’s Cannabis Program Supervisor Dasheeda Dawson and SEED Grant recipients. Dawson is a national cannabis policy expert, and was recently featured in:

The Office of Community & Civic Life (Civic Life) connects the people of Portland with their City government to promote the common good. Our programs create a culture of collaboration, expanding possibilities for all Portlanders to contribute their knowledge, experience, and creativity to solve local problems and make life better in the city we all share. www.portlandoregon.gov/civic/