Welcome to Civic Life on Portland.gov!

We are currently in the process of migrating all of our content to this new website. If needed, you can access the old Civic Life homepage here.

PORTLAND, Ore.— The Office of Community & Civic Life’s Graffiti Program earned Council approval for a reallocation of $150,000 of existing funds to support the removal of unwanted graffiti across the city this year. This reallocation means more capacity will be added to the program’s clean-up efforts as the City looks to onboard four new contractors later this month—particularly those that are state-certified COBID as part of Civic Life’s plan in helping  multiple local minority-owned and emerging small businesses be more successful. Council’s recent vote means Portland communities will be seeing even more results as soon as this summer.

These new contracts and additional funds will double the Graffiti Program’s capacity to respond quickly and efficiently to graffiti requests across the city prioritizing residential, nonprofits, and small businesses at little or no-cost to them. Since the World Health Organization declared the start of the pandemic on March 11, 2020, and death of George Floyd on May 25, 2020, Portland has seen an 394% increase in graffiti-related complaints.

“We have been hearing from constituents that they want to see unwanted graffiti removed throughout the city and we are responding to those concerns," said Commissioner Jo Ann Hardesty. "I am pleased to see that Council has approved a reallocation of funds to expand the capacity of the Office of Community & Civic Life’s Graffiti Program. I’m proud that we’re scaling up this important work to address graffiti vandalism, and I’m even prouder of the community who responded in this moment in history by working together and taking the appropriate steps to preserve some Black Lives Matter related messages and street art in their own neighborhoods, such as the George Floyd mural that was created in downtown last summer.”

Civic Life’s Graffiti Program manages thousands of graffiti requests, including administering complaints, prioritization of work, and work order allocation within the City of Portland. The totality of requests is handled by Graffiti Program Coordinator Juliette Muracchioli and new Livability Supervisor Kareen Perkins overseeing Civic Life’s graffiti, liquor licensing and noise programs. As part of the Civic Life’s scaling-up plan and the recent Council approval of the additional funds during Spring Budget Management Plan, Civic Life has hired a new community service aide to help with the back log of graffiti requests.

“I am proud of the Graffiti Program’s work this past year,” said Muracchioli. “Not only have we proactively responded to graffiti complaints, but we have also been sensitive to the historic moment we are living in. During the height of Black Lives Matter movement, the City permitted BLM-related messages and street art to remain on City assets.”

“In late January, KGW interviewed us and we reported graffiti work orders were not only up by 300%, but that we were only halfway through the year and over budget,” said Perkins. “Council’s vote signals to Portlanders that even more help is on its way.” 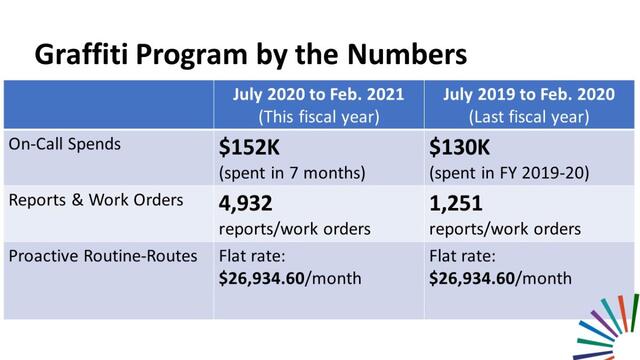 Portland has seen a significant increase in graffiti since the pandemic began. Less foot traffic in commercial areas left buildings empty and open to graffiti vandalism. Additionally, some protest activity has resulted in more graffiti across the city. Civic Life’s Graffiti Program partners have worked tirelessly to respond to the overwhelming graffiti complaints while prioritizing the removal of hate speech and preserving important historical murals.

Will Portland See Less Graffiti in 2021?

“It will take time for us to get ahead of the graffiti vandalism and tags, and this additional support is an important way to add even more intensified clean-up efforts,” said Michael Montoya, Civic Life Strategy, Innovation & Performance Manager. “Knowing that we have a lot of work ahead of us, our increased funding requests align perfectly with the Mayor’s priorities and livability initiatives. We are confident that increasing our graffiti removal and contracts dollars in coordination with all the other great efforts by residents and our partner bureaus will go a long way to efficiently clean up our streets.”

“In my six years as the Graffiti Program coordinator, never have I had so many local vendors reach out to offer to provide resources to help the city they love,” said Muracchioli. “Our program is poised to work with our partners, community members, existing and new contractors to remove graffiti across the city and return to our baseline of one to three-day response rate for graffiti removal requests."

Since March 2020, the Civic Life team worked behind-the-scenes to add capacity and speed for the City’s clean-up efforts. In leading up to the additional contractors, Civic Life has been setting the stage to quickly respond to Portland’s restoration efforts.

“While we cannot predict what the summer will bring, we can certainly scale-up efforts to help keep our City clean,” added Montoya.