Information
2030 Objective: Water use is the same or less than fiscal year 2006–07 levels. 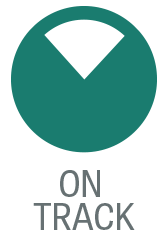 This drop is due to a combination of water conservation efforts in Portland’s parks, weather demands, maintenance improvements in city-owned buildings, LEED certification and the green building policy.

An ongoing downward trend in water use in not predicted. In fact, there may be years in the future when water use exceeds 2006 levels. Climate change models for the Pacific Northwest predict hotter drier summers, which will increase demand on water supplies.

The growth of Portland’s population also will put demands on existing and new City facilities and infrastructure, like parks, community centers and restrooms.

Water use in City operations

Portland Parks and Recreation has made consistent efforts to install weather-based, centrally controlled irrigation systems in parks. Eighty parks currently use the controls which include localized weather stations and soil moisture sensors. Each newly developed park is equipped with the necessary components to monitor and manage the irrigation systems, replenishing only water required for landscaping needs. Additionally, park staff complete annual inspections, tuning up the irrigation systems to maintain overall efficiencies.