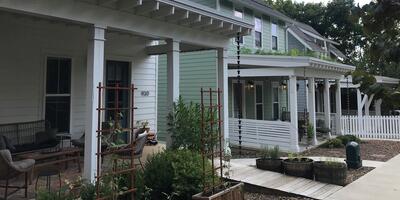 In August 2020, Portland City Council adopted the Residential Infill Project (RIP), and a year later it went into effect on August 1, 2021.

Now a follow-on project – called RIP2 – will address several outstanding mandates in the State’s middle housing bill HB2001 and subsequent administrative rules adopted in December of 2020. This bill requires Metro cities to allow duplexes on all lots where single homes are allowed as well as other types of middle housing (triplexes, fourplexes, attached houses and cottage clusters) in many residential areas.

While the first part of RIP addressed higher density residential zones (R2.5 to R7), the second part will:

The RIP2 Proposed Draft is now published and ready for public review. The Proposed Draft includes a staff report summarizing the project, as well as the proposed Zoning Code changes needed to implement the following 10 key project proposals.

Apply Residential Infill Options to R10/R20 Zones:
1. Establish new building size limits
2. Allow Duplexes on all lots
3. Allow Triplexes/Fourplexes in certain areas
4. Allow a House with 2 ADUs or Duplex with 1 ADU in certain areas
5. Allow Four- to Six-plexes if half the units are “deeply affordable”
6. Require a unit be “visitable” when 3 or more units are on a lot

This proposal to the Planning and Sustainability Commission (PSC) will implement the middle housing changes in the R10 and R20 zones and bring the City of Portland into compliance with the State's middle housing rules. The PSC will review and take public testimony on the proposals, then make their recommendation on the proposals to City Council early next year.

Portlanders can see how the proposals may affect their property and any others by using the Map App. This online tool allows users to enter an address, see whether it is in an affected single-dwelling zone, and what types of housing may be allowed.

The Map App also shows whether a property already has, or is proposed to have, the “constrained sites ‘z’ overlay zone.” This overlay zone will be removed from some properties in the R2.5, R5, or R7 zone as part of this proposal. The overlay zone means the property has one or more natural resource or land hazards. Properties with the constrained sites ‘z’ overlay, or that are not on a maintained street or large enough, are generally limited to either a single house with or without an accessory dwelling unit (ADU) – or a duplex.

Check out the Map App

RIP Part 2 includes a number of proposals to bring the R10 and R20 zones into alignment with the housing types adopted for the R2.5, R5, and R7 zones with RIP1. These larger lots are generally concentrated in parts of the West Hills and in outer SE Portland. Other changes will affect all the single dwelling zones including the introduction of higher-density attached houses and cottage clusters, and a new expedited process to divide duplexes, triplexes, and fourplexes into separate lots.

Project staff are holding two virtual info sessions on the Eastside and Westside. This will allow residents of those areas to ask questions specific to their unique geography, especially those living in the R10 and R20 zones. Staff will try to focus on more local concerns at each session; however, anyone is welcome to attend either session.

To access the event, you will need to register from the event listing you want to attend.

RIP2 coming to the PSC November 30

Staff will brief the Planning and Sustainability Commission on the proposals later this month. Community members are invited to watch the briefing starting at 5 p.m. on Tuesday, November 30. Watch the briefing.

While RIP2 is just beginning, the project will move quickly to meet state deadlines. After the PSC briefing on November 30, the Commission is scheduled to hold a public hearing on RIP2 on December 14 at 5 p.m.

After taking testimony and deliberating on the proposals, the PSC will make a recommendation to City Council around February of next year. Council will hold an additional public hearing before making the final decision on RIP2 in the Spring 2022.

The package of amendments must be adopted by June 30, 2022, to meet the state’s compliance-mandated deadline.