About the RIP2 Project 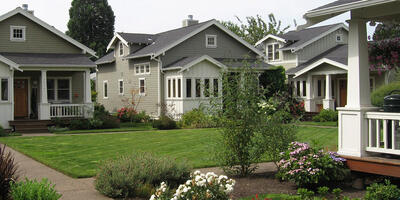 RIP2 completes the expansion of housing types allowed in all residential zones that began with Residential Infill Project Part 1, including Portland’s larger lots in outlying areas.

The second part of the Residential Infill Project (referred to as RIP2) addresses several outstanding mandates in the State’s middle housing bill HB2001. This bill requires Metro cities to allow duplexes on all lots where single homes are allowed and allow other types of middle housing, such as triplexes, fourplexes, attached houses and cottage clusters in many residential areas.

While the first part of RIP addressed residential zones from R2.5 to R7, the second part completes the expansion of housing types allowed in all residential zones, including Portland’s larger lots in outlying areas.

Additionally, with the passage of Senate Bill 458, cities must also allow middle housing to be divided so that each unit is on its own lot.

Part 2 of the Residential Infill Project (RIP2) continues the work of the Residential Infill Project – Part 1 to create more housing options in Portland’s residential neighborhoods. RIP2 will focus on introducing middle housing to the very low-density R10 and R20 zones. These areas are most common in the outer eastern parts of the city and the West Hills. In compliance with legislative mandates from the State of Oregon, RIP2 will also create new allowances throughout all neighborhoods for two additional middle housing types: attached houses and cottage clusters. To satisfy the State’s compliance deadline, these changes must be in effect by June 30, 2022.

RIP Part 1 introduced duplexes, triplexes and fourplexes to most single-dwelling neighborhoods. These are single primary buildings that contain more than one dwelling unit on a single piece of property. Cottage clusters and attached houses are other variations of middle housing.

House Bill 2001 defines a cottage cluster as “groupings of no fewer than four detached housing units per acre with a footprint of less than 900 square feet each and that include a common courtyard.” In essence, they can be pocket neighborhoods or micro-communities developed with detached dwellings that exchange private yards for larger common open space. They are different than other middle housing types because the units are in separate buildings and may either all share one piece of property, or they can be situated on small individual lots.

Per the Oregon Revised Statutes (ORS 197.758), a townhouse is “a dwelling unit constructed in a row of two or more attached units, where each dwelling unit is located on an individual lot or parcel and shares at least one common wall with an adjacent unit.” Another way to think of townhomes is like duplexes or triplexes with property lines dividing the building into separate lots. These provide more “fee-simple” homeownership opportunities where a person owns the entire home and the land beneath it versus condominium units, where a person owns the interior of a unit but shares an ownership interest in the land and common areas with other owners in the building.