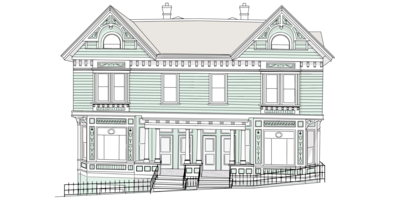 The guidelines address a variety of topics ranging from site planning to cultural history, vehicular parking to tall new buildings.

The Recommended Draft design guidelines were developed by Bureau of Planning and Sustainability staff and a consultant team with the active assistance of a volunteer Community Advisory Group comprised of area residents, architects, and historic preservation professionals. The Historic Landmarks Commission voted to support the Recommended Draft Design Guidelines on August 8, 2022.

The South Portland Historic District was designated in 1998 in recognition of its role as a gateway for Euroamerican ethnic groups arriving in Portland during the late 19th and early 20th centuries. The district is a subset of the larger South Portland neighborhood, which developed as a multi-ethnic, walkable, and primarily residential suburb during that time. Despite major transportation and redevelopment projects that physically divided South Portland and precipitated waves of displacement and public disinvestment during the mid-1900s, the 31 blocks within the South Portland Historic District represent the largest collection of surviving buildings dating to the neighborhood’s early development.

The South Portland Historic District encompasses the Lair Hill Conservation District, a smaller geographic area that was designated by the Portland City Council in 1977 for architectural preservation purposes.

The Portland Zoning Code applies land use regulations to designated historic resources, such as review of certain demolition proposals as well as alteration, addition, and new construction proposals. These regulations are intended to protect significant historic structures, while allowing for the adaptation of existing buildings and the development of complementary new buildings.

In recent years, design guidelines have been adopted for the New Chinatown/Japantown and Skidmore/Old Town Historic Districts to provide district-specific approval criteria. Development of the South Portland Historic District Design Guidelines was funded in part by a Metro grant as part of a series of recent area planning projects focused on Southwest Portland.