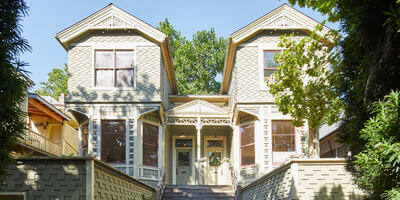 Recommended Draft Design Guidelines are now available for review; Portlanders invited to testify in writing or at a public hearing on Nov. 2.
Published
September 30, 2022 2:30 pm

One of Portland’s smallest and least known historic districts is getting new design guidelines to assist in preserving the area’s history, while accommodating future changes. The South Portland Historic District  in SW Portland, a formerly bustling neighborhood of immigrants, small businesses, schools, and cultural and religious institutions, has been recognized by the City as a special historic place since 1977. However, in recent years it has not received the same attention as some of the city’s other historic districts.

Once home to a significant population of Jewish, Italian, and Eastern European newcomers, the area was subsumed by the redevelopment frenzy of the mid-20th century. Large swaths of the working-class neighborhood were bulldozed and replaced by the Ross Island Bridgehead, I-5, and the South Auditorium Urban Renewal Area, prompting waves of displacement of vulnerable residents and businesses. What remains are a few blocks of Victorian homes and older commercial buildings interlaced with walkable tree-lined streets, surrounded by I-5 to the east, Barbur Boulevard to the west, and the spaghetti tangle of on- and off-ramps to the Ross Island Bridge in the middle.

Bureau of Planning and Sustainability Historic Resources Program staff have worked with community members and historic resource professionals since 2019 to develop an updated set of design guidelines for the South Portland Historic District that honor the area’s architectural and cultural history. The Portland Historic Landmarks Commission recently voted to support the guidelines, which now head to City Council for public testimony and a final adoption vote.

The South Portland Historic District is significant to the city’s early immigrant history and representative of building typologies characteristic of the 1876-1926 period. A map of the Historic District is available on PortlandMaps. The new design guidelines are intended to provide flexible approval criteria for alteration, addition, and new construction proposals in the district, ensuring the preservation of historic resources, accommodating changes in use, and providing guidance for redevelopment of vacant sites.

The design guidelines were developed by Bureau of Planning and Sustainability staff and a consultant team, with the assistance of a volunteer community advisory group of area residents, students, and historic preservation professionals.

After reviewing public feedback on an earlier Proposed Draft of the design guidelines, the Portland Historic Landmarks Commission made several minor changes to the document before voting unanimously on Aug. 8, 2022, to recommend the City Council adopt the design guidelines.

In their vote to support the guidelines, the Commission found that:

The two-year process to develop a new set of guidelines for the district has been able to address some “holes” in the criteria. For instance, the district’s history as a vibrant neighborhood of multi-ethnic immigrants was discussed in the [Historic District] nomination but not in the old guidelines. We are glad to see the new guidelines provide context and background as well as criteria that will help tell this story over time. The new guidelines will also allow for needed growth and improvements to the historic area that are sensitive to the character-defining features of the district.

Review the Recommended Draft and testify to the Portland City Council

The Recommended Draft South Portland Historic District Design Guidelines incorporates the changes made by the Portland Historic Landmarks Commission and will be considered by the City Council before they are formally adopted.

Portlanders can testify to the City Council in writing or in person at a public hearing on Nov. 2, 2022 at 2 p.m.

After considering public comments and evaluating any possible final amendments to the document, Commissioners will vote to adopt the South Portland Historic District Design Guidelines. The new guidelines are expected to take effect on Jan. 1, 2023.