Skip to main content
Looking for the Age-friendly City program?

You're in the right place. The Age-friendly City program is focused on the Age- and Disability-Inclusive Neighborhood (ADIN) Project at this time and program information has been moved to this project.

Read more about the ADIN project and the history of the Age-friendly City program. 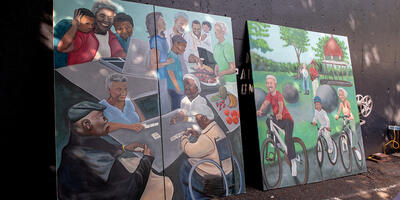 As Portland’s population continues to grow older, it’s important to provide services that allow people to age in their homes and communities, while receiving care that fulfills their medical and social needs.

The Marie Smith Adult Day Center in NE Portland is an adult day center operated by Volunteers of America (VOA) Oregon. Since 1995, the Center has provided social, recreational and supportive services to older adults who live alone, or as dependent relatives, which includes many Black elders who currently, or previously lived in the area.

The center takes its name from Marie Smith, an important Portland activist, who was the first woman president of the Portland Chapter of the National Association for the Advancement of Colored People (NAACP). A recent event at the center celebrated the past and the present with the unveiling of an age-friendly mural by local mural artist Amaranta Colindres.

The mural’s intent was to build on the lived experiences of elders from Portland’s historic Black community and showcase positive community representations, including vibrant and active community members biking and running, intergenerational interactions, people of diverse ages, and people with disabilities.

The mural highlights historical imagery from Portland’s Black community, such as the dome at Dawson Park, and features the treasured local musicians LaRhonda Steele and Norman Sylvester. By highlighting important places and people to the Black community, the mural honors the past as we plan for the future, while reminding us of Portland’s history of racist planning and the continued need to advance racial equity.

The unveiling and celebration at the center included words from Portland City Commissioner Carmen Rubio, VOA Oregon CEO Kay Toran, AARP Oregon State Director Bandana Shrestha, muralist Amaranta Colindres, and others. Joe Nunn (son of Bobbie Bonner Nunn) recalled how his mother – “a tireless workaholic for civil rights” – advocated for the center to be named after Marie Smith based on her determination to advance the rights of people of color in Portland.

BPS staff have worked with the Marie Smith Day Center over the past year during the mural co-design process, which included meeting with community members to detail historical aspects of the center. Patrons/guests of the center met with members of the mural co-design team and staff from VOA participated in meetings with BPS staff and the mural co-design team, and VOA leadership aided in developing a vision for what an age- and disability-inclusive Portland would look like. Future work/activities with the Center include exploring support for a history project within the center, and potentially being involved in an Age- and Disability-inclusive Neighborhood pilot project, expected to be launched in summer 2023.

Note: The mural was funded through an AARP Community Challenge grant and co-designed with elders from North and NE Portland Jody Boyer, Mary Cooke, Richard Hunter and Patricia Welch.