As Portland moves forward to meet its housing needs, it is imperative that we – the City of Portland and the community – consider our past as we plan for the future. 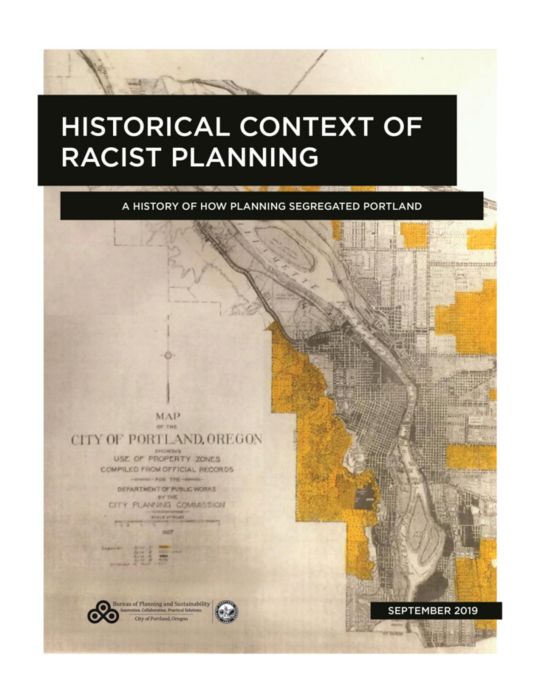 Historical Context of Racist Planning: A history of how planning segregated Portland is a review of racist planning practices in Portland. This systemic discrimination, which was also practiced nationwide and goes back to the origins of our country, has harmed communities of color by excluding them from homeownership and wealth-building opportunities; denying them access to educational resources, jobs and healthy neighborhoods; and perpetuating segregation, displacement, and harmful stereotypes through the zoning code, deeds and covenants, lending practices, public housing and urban renewal.

It wasn’t until the 1960s, when the civil rights movement led to the Fair Housing Act and later, in 1977, to the Community Reinvestment Act, that the federal government began to address these racist wrongs. But even then, communities of color – particularly African Americans – continued to be displaced as investments in urban renewal and community plans resulted in gentrification.

Here in Portland, that harm is still felt today. And as insidiously as the racist covenants lurking within the deeds of Portland’s older homes, the zoning patterns have created an exclusionary legacy and fueled speculation and displacement. Once a city of a single “residential” zone, where housing of many types coexisted in the same neighborhood, Portland has been intentionally segregated through the creation of a series of single-dwelling zones, where only one house is allowed on a lot. Furthermore, community plans in areas with larger populations of people of color received more multi-family zoning, while areas with larger white populations preserved much of the single-dwelling zones.

This report shows how this history has led to today’s inequitable outcomes, where exclusive neighborhoods of white affluence coexist next to neighborhoods with households of color at the greatest risk of displacement. And so, it has become something of a beacon as we move forward in our equitable planning work.

We invite you to explore this particular story of Portland’s history, as well as the early zoning maps, snapshots of racist covenants in deeds, the data about racially inequitable outcomes and more. And if you want to dig deeper, we’ve assembled a variety of other resources to explore the topic.

Portland’s policy and investment framework to reverse suburban white flight, which guided the first Comprehensive Plan and multiple capital plans in the 1980s.

A summary presentation of the report.

The Bureau of Planning and Sustainability has partnered with Greta Smith, a Portland State University Masters student in the Department of History, to create an interactive map showing the location of racist covenants in Portland.

Presentation at the Planning and Sustainability Commission (video, ~2.5 hrs)

Watch the "Planning for Racial Equity" briefing to the PSC.

Watch the video from the Urban Institute below to learn how zoning affects communities.

A Dream Rezoned
Gentrification and Displacement Studies
About the ADAP project