Whether traveling across Europe by bicycle or exploring the United States in a vegetable-oil-powered VW truck, Jaimes Valdez is always thinking about energy. And how to make it cleaner and accessible to all. 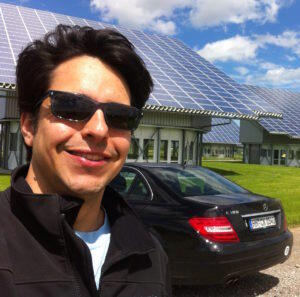 While he spent his early childhood in New York City, rural Mexico, and Nicaragua, he has called the Pacific Northwest home since he was 10 years old. His family struggled with energy affordability on the outskirts of Seattle, where they kept the house warm in the winter with wood heat and blankets over the windows, black mold on the walls.

“I was raised in economic poverty,” Jaimes says, “but I had other privileges like access to nature, education and creativity.”

He’s been interested in energy and justice for a long time. In high school, he gained an appreciation for science and social movements. But it was in college 20 years ago that he learned about climate change and wanted to become part of the solution, getting a degree in physics and environmental studies, then starting a renewable energy educational organization.

Throughout his studies and after college, he worked a variety of jobs in construction, restaurants, and theatre doing sound and lighting design and production. “That’s been my role in a lot of ways,” he says, “behind the scenes, helping the show go on.”

About 10 years ago, Valdez spent some time at the Bureau of Planning and Sustainability, working to help homeowners do group solar panel installations through the Solarize Portland program. He continued his quest to build community around clean energy on a year-long fellowship to Germany, learning about renewable energy and cooperative financing.

“The Fukushima nuclear disaster in Japan happened about a year before I arrived, and Germany was in the first stages of implementing their ambitious clean energy transition away from nuclear and coal power,” he remembers. “There was resistance to transmission infrastructure and large support for locally sited renewable development, which opened my eyes and reshaped my perspective.”

After returning to the U.S., Valdez worked for Spark Northwest, providing technical assistance to people in rural communities and advocating for equitable, clean energy policies. As a lobbyist in Salem and Olympia, he listened to a lot of NPR while driving his 1984 biodiesel Mercedes up and down I-5. “But I also took Amtrak and the Bolt bus,” he recalls.

While at BPS, Valdez and colleagues realized they were reaching mostly white, upper income folks and recognized they didn’t have tools and incentives to offer the broader community. So, when the PCEF ballot initiative took off in 2018, he volunteered for the campaign, canvasing in East Portland. And when the PCEF program started, he was excited that it prioritized community needs and addressed multiple past harms. He also felt his expertise in renewable energy was a good fit.

Valdez was one of the first three people to be hired on the PCEF team, and he wore many hats in the start-up phase. His role as manager of strategic partnerships and policy involves capacity building for organizations, building resources for applicants, partnerships with state agencies and the utilities, as well as engagement on legislative issues. Valdez is also one of the PCEF team experts on clean energy and IT platforms, and he weighs in on outreach and engagement strategies.

“I’m a project guy,” he notes. “I like working on projects fixing, repairing and improving things, and there’s a lot of things to fix.”

What is PCEF fixing? Valdez says, PCEF is:

PCEF can’t fix the regional transportation system or the housing market, he observes, but “we can fix how people live in their homes, and make those homes more comfortable, healthy and affordable.”

PCEF has two goals: carbon reduction and developing resources for communities to meet social and racial equity goals. “But if we just give money to organizations that already do this work,” he says, “we’re not tapping into the creativity of those most in need and affected by climate change.” So, with this first round of funding, PCEF is helping many of these groups plan and develop future PCEF projects with $2.5 million in planning grants.

Regarding funding large transportation or infrastructure projects, Valdez says even $40-60 million (a fully funded PCEF program) isn’t enough to scratch the surface of a major transportation project. “But,” he says, “we could fund Black-owned EV charging station development – if it meets the goals and criteria of the PCEF program.”

Describing the grant selection process, Valdez says it’s remarkably transparent, letting community members see how a grant is scored, with opportunities for continual input to the program. It’s a lot of work for staff and the nine volunteer committee members. “We’re asking a lot them (the committee) during the grant review process, reading all the proposals, attending dozens of meetings before awarding the grants. But everybody’s in it.”

Moving forward, Valdez says the team is considering how they can create a role for additional community members’ participation. “There is immense knowledge and expertise in our local BIPOC communities – people who are closest to their needs.” He would be happy to see that evolve as the PCEF program continues to grow and adapt.

Another fun role for Jaimes: He’s on the selection committee for public art in BPS’s future home, the Vanport Building. “I also used to work in a foundry and art studio.” Of course, he did.

City of Portland Bureau of Planning and Sustainability