Information
Purpose, background, timeline, and contact information for the MP2H project.
On this page

The Montgomery Park to Hollywood Transit and Land Use Development Strategy (MP2H) will create an equitable development plan for potential transit-oriented districts in NW Portland (extending from the Central City to Montgomery Park) and NE Portland (extending from the Central City to  the Hollywood District). The MP2H study will identify land use and urban design, economic development, and opportunities for community benefits possible with a transit-oriented development scenario. The project will also consider how such opportunities could support the City’s racial equity, climate justice, employment and housing goals. The work is funded in part by a Federal Transit Administration (FTA) grant.

Major transit investments are a land use tool that can be used to shape the future growth of the Central City and surrounding areas. The workplan will assess the ability of different transit and land use scenarios to support compact development along the corridor, with an emphasis on identifying tools to help advance equitable development.

What is “Equitable Development”?

According to the U.S. Environmental Protection Agency (EPA), Equitable Development is “an approach for meeting the needs of under-served communities through policies and programs that reduce disparities while fostering places that are healthy and vibrant. It is increasingly considered an effective placed-based action for creating strong and livable communities.”

In 2001, Portland launched the country’s first modern-era streetcar system to serve the Downtown Portland, NW Portland and the developing Pearl District. The streetcar system was expanded in the mid-2000s to serve new development in the emerging South Waterfront district, and later the Lloyd Center and Central Eastside areas. The results are visible every day as thousands of Portlanders and visitors travel around a vibrant Central City, complete with commercial and office spaces, market rate apartments and condos, as well as the highest concentration of affordable housing in the city.

The 2009 Portland Streetcar System Concept Plan took a citywide view of system expansion. A future line to Montgomery Park (the city’s second largest office complex) and a line to the Hollywood Town Center were among several lines identified in the report. During the recent 2035 Comprehensive Plan and Transportation System Plan process, these two lines were elevated in priority for streetcar planning and implementation.

In 2018, Portland City Council funded a preliminary Northwest Portland Streetcar Extension and Land Use Alternatives Analysis for an extension of streetcar to Montgomery Park. This analysis identified a potential new alignment along NW Wilson and NW York streets, through an area that currently includes industrial land uses. The study area is anticipated to redevelop where the 2035 Comprehensive Plan allows more flexible employment uses (such as nontraditional creative office spaces or niche manufacturers/retailers). The preliminary study explored the employment/jobs and housing implications of land use scenarios ranging from industrial to mixed use. The MP2H study will further the analysis and make a recommendation on future land uses in the area.

The 2035 Comprehensive Plan updated land use and zoning designations in and around the Hollywood Town Center, and along key corridors such as NE Sandy and NE Broadway. Three potential streetcar alignment corridors are being evaluated: NE Broadway; NE Sandy Boulevard; and NE Irving/NE Sandy. The MP2H will conduct a preliminary analysis to determine if there is a preferred alignment corridor for future planning and refinement.

A Community Engagement Plan is expected to be completed by December 2019.

City and project staff will engage local advisory bodies to ensure institutional, community and private sector input. Staff will explicitly focus on the needs of under-served communities living or working in the area, and how development along the project corridor can benefit historically marginalized communities. The project will provide small grants or contracts with community-based organizations to better engage these communities. Staff will draw from the Preliminary Racial Equity Analysis of NW Streetcar Expansionthat was created early in project development phases, including recommendations for community engagement. 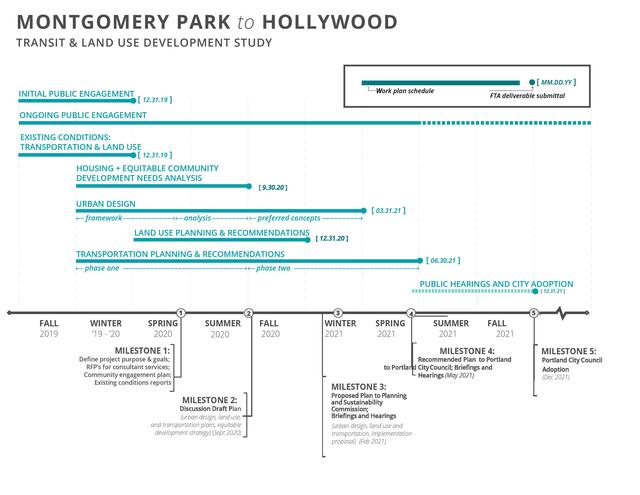