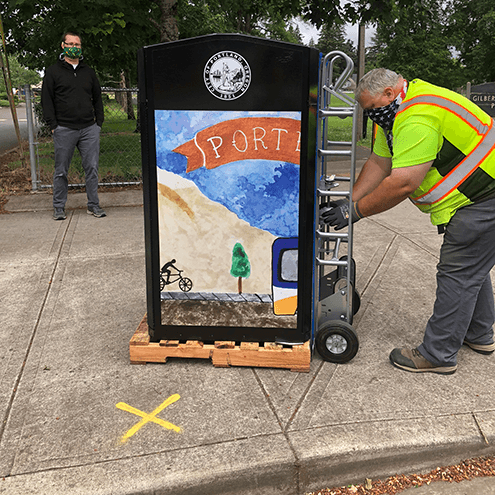 One factor that affects the health and livability of neighborhoods is litter on the streets. Focusing recent planning efforts on East Portland, the City of Portland’s Public Trash Can program has coordinated the installation of over 200 new public trash cans in these East Portland neighborhoods: Argay Terrace, Centennial, Glenfair, Hazelwood, Lents, Mill Park, Parkrose, Parkrose Heights, Pleasant Valley , Powellhurst-Gilbert, Russell, Wilkes and Woodland Park. The first installation of new cans decorated by local artists started in July, and installations will be completed by the end of August.

“Colorful new trash cans on the streets of East Portland means neighborhoods that are nicer to live in, and healthier, too,” said Portland Mayor Ted Wheeler. “We thank the artists and involved community members who helped with the process.”

City of Portland partnered with community organizations to create artwork, determine can locations

The City partnered with local community organizations and groups to engage the public in creating the artwork for the trash cans as well as selecting the locations where the trash cans will go. Youth from a local nonprofit, Morpheus Youth Project, created six different pieces of artwork that are featured on the trash containers. Morpheus Youth Project uses workshops in the arts and education to provide culturally responsive learning opportunities for youth that stimulate healthy social interaction and positive youth development.

All of the new trash cans will be manufactured in two sizes, 35 gallons and 65 gallons. The new cans feature easily accessible roll carts for safety during collection and an anti-graffiti coating. They also include a special side-bin for returnable deposit cans and bottles that allows members of the public to remove those containers to be able to collect the deposit refund.

The City has partnered with a local disposal company and Black-owned business, COR (City of Roses Disposal & Recycling), to service the cans three times per week. COR is a family owned company located in East Portland.

The addition of the public trash cans will provide opportunities for community members to dispose of their trash appropriately, helping to reduce litter in our neighborhoods.

More about the City of Portland’s public trash can program

BPS administers the public trash can program that provides trash receptacles and contracts for collection service in downtown and six other business areas of the city. This program was started by the Bureau of Maintenance in 1977, and City Council directed the Solid Waste and Recycling Program to administer the program in 1998. BPS has maintained the collection of approximately 600 public trash cans within the initial program areas and collection is provided by commercial haulers selected through a competitive process.