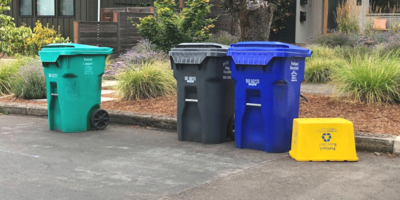 It’s not every day that a veteran City of Portland employee retires with a legislative victory under their belt. But BPS’ Bruce Walker did, working hard to make SB582 – the Recycling Modernization Act – a reality before he closed out his career last month with the City of Portland.

For the last two and a half years, Walker participated in the state’s Recycling Steering Committee for the bill. He said it was a tough rulemaking process with Oregon’s Department of Environmental Quality (DEQ), but “the bill puts Oregon at the forefront of recycling innovation once again.”

The bill will overhaul Oregon’s outdated recycling system by building on local community programs and leveraging the resources of producers to create an innovative system that works for everyone.

“It’s a major restructuring of recycling, a watershed moment,” noted Walker. “A lot of credit goes to the committee members and DEQ.”

Key elements of the bill include:

In 1971, when Oregon’s exemplary Bottle Bill went into effect, Walker was in high school. Since then, numerous other bills have made it through the legislature, including the Recycling Opportunity Act in 1983, which required all cities with more than 4,000 residents to offer recycling services, and the Materials Management Act (2015), which looks at the life cycle of products.

Walker is proud of his 34 years at the City. At the Bureau of Environmental Services under Commissioner Earl Blumenauer in the late 1980s, he helped develop a program that assigned garbage haulers to specific neighborhoods.

“At the time, I had four different haulers on my street on different days,” he recalls. “Organizing routes and haulers was the ’moonshot’ of garbage and recycling. It was an amazing level of work to coordinate all the haulers and organize all their routes to be effective.” Mayor Bud Clark was in office when the new rules were adopted in 1991.

In the early 90s, all Portland households were provided two yellow bins to collect paper, steel cans, glass bottles, and some plastics. This was Portland’s first citywide approach to provide curbside recycling service. In 2000, Commissioner Dan Saltzman created the Office of Sustainable Development, which included the Energy Office, Solid Waste and Recycling, and the Green Building Program. In 2008, blue and green roll carts were delivered to residents for recycling and yard waste, respectively. The City also developed a robust voluntary food scraps program for restaurants and grocers to compost food.

“Every year we go in front of City Council to review and approve our rates,” said Walker. “We’re cognizant of the impact of rising costs and proud of the system we created to cut them. In general, the public really understands and supports the recycling and compost system.”

Noting that Portland has won numerous national and state awards for its recycling program, Walker said of his recycling innovation legacy, “My goal was to have a great program for the residents and businesses. It’s not a me thing, it’s a we thing: staff, haulers, and the residents who put their recycling and compost out.”

Other recent innovations include clean fleet requirements for garbage trucks, waste equity initiatives, and the addition of sideguards to garbage trucks to prevent serious injury to cyclists and pedestrians in the event of a collision.