The purpose of the Columbia Corridor/Industrial Land Environmental Project is to ensure consistent and adequate protection of existing rivers, streams, wetlands, flood areas, steep slopes and vegetation and the functions those resources provide including minimizing flood risks, reducing erosion and landslides, improving water quality, reducing heat island impacts and supporting fish and wildlife in the City of Portland.

There are two phases of the Columbia Corridor/Industrial Lands Environmental Project:

Phase 1: Update maps of existing natural resource features identified in the Natural Resources Inventory (NRI). Maps of floodplains, wetlands and streams help us determine how much land is available for future development to support jobs and housing needs in the city.

Phase 2: Update the environmental overlay zones to protect the natural resource features in a way that is consistent with the 2035 Comprehensive Plan and the updated Economic Opportunity Analysis.

Between 1989 – 2002, environmental overlay zones were applied using relatively “low-tech” methods. Today, technology has advanced significantly and can help us identify and better map natural resources. For example, LiDAR is a remote sensing tool that detects light reflected off objects on the ground. LiDAR can be used to accurately and consistent map topography, streams, wetlands and vegetation – even the height of individual trees.

In 2012, using this new technology, the City updated the Natural Resources Inventory (NRI). Over 160 miles of streams were remapped and approximately 75 miles of previously unmapped streams were added. The NRI was adopted as factual basis for the 2035 Comprehensive Plan.

In 2018, the Bureau of Planning and Sustainability began a city-wide update of the NRI mapped feature data. Between 2018 and 2020, staff completed more than 500 field visits to confirm the location of streams and vegetation. At the same time, the Bureau of Environmental Services (BES) began the Wetland Inventory Project (WIP). WIP uses the Oregon Department of State Lands methodology to map wetlands. BES conducts free on-site wetland determinations to confirm the mapping.

30 years of zoning in Portland

Since 1989, Portland has been using zoning to conserve our natural resources, as shown in the graphic below, or view a more detailed PDF map: 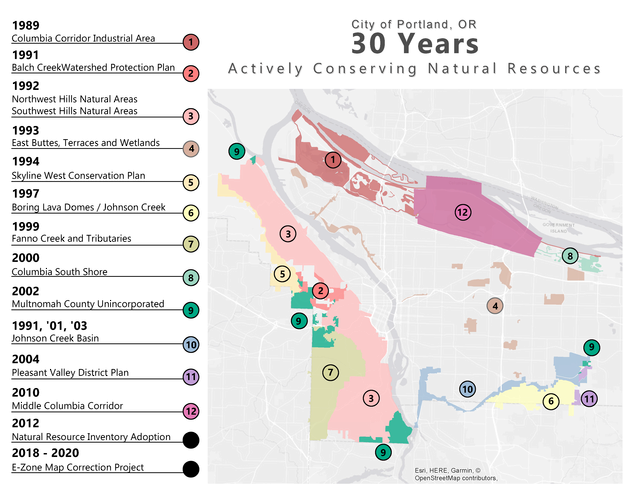 Between December 2020 and May 2021, staff will be performing field visits and wetland determinations to confirm on-the-ground location of streams, wetlands and vegetation in the Columbia Corridor, Portland Harbor and other industrial areas in the city.

Following adoption of the updated EOA, the Columbia Corridor/Industrial Land Environmental Project will begin phase two, which is updating the regulatory tools to protect natural resources in a way that is consistent with the 2035 Comprehensive Plan and the results of the EOA.