How the plan is created and relates to other area plans

Information
The Comprehensive Plan is one of many land use and development plans within a statewide planning program.
On this page

Oregon has had a statewide planning program since 1973. This program is built on a set of 19 Statewide Planning Goals that cover a wide range of topics. Portland is required to adopt a Comprehensive Plan that implements the applicable statewide goals at a local level.

Under state‐mandated Periodic Review, there are several steps that must be taken to update a comprehensive plan. Below is a summary of the state-approved process used to create the 2035 Comprehensive Plan.

The first step of Periodic Review is assessing the adequacy of the existing plan and background data to determine if conditions have changed enough to require the development of a new Comprehensive Plan or updates to portions of the Comprehensive Plan. The 2008 assessment showed that a significant update to the City’s Comprehensive Plan, including new background information, was needed.

The next step in Periodic Review is the development of a work plan. As part of periodic review, the City is required to develop and adopt a work plan to guide the update of the Comprehensive Plan. In 2008, after review and recommendations by the Planning and Sustainability Commission, the Portland City Council adopted a work plan by Resolution No.  36626. This document includes the Council‐approved

After the work plan is adopted, the next step is the development of a factual basis, as required by ORS 197.625 and OAR 660‐0025. The purpose of this work is to provide a thorough and current analysis of existing conditions in Portland on which to base the content of the Comprehensive Plan. The factual basis includes the following documents: 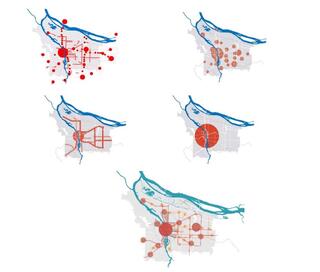 In Portland’s Buildable Lands Inventory Report, published in 2012, the City analyzed existing development patterns and intensity, land and development values, and land use designations and zoning to determine where there is vacant land and land that is likely to be redeveloped. The report identifies constraints, such as inadequate infrastructure services or natural hazards.

The Growth Scenarios Report helps planners and the community make informed decisions about which investments and growth patterns will bring the greatest benefit to the most Portlanders, while moving the city closer to meeting performance goals.

Performance goals include things such as reducing carbon emissions, improving access to living wage jobs, and providing safe and convenient access to goods and services within walking distance of where people live.

The Growth Scenarios Report uses information from the Buildable Lands Inventory to measure the performance of different growth alternatives, as well as how each scenario performs against the Portland Plan Measures of Success. Based on analysis in the Growth Scenarios Report, a “preferred scenario” was developed. The proposed Comprehensive Plan Map implements that preferred scenario.

In 2013, staff prepared a Working Draft of the Comprehensive Plan, in consultation with a group of advisory committees (known as Policy Expert Groups or PEGs). More than 60 volunteers participated in this process, including business and neighborhood leaders as well as a variety of topic/technical experts and community representatives. The Working Draft was shared with the general public at meetings and events and online. The Working Draft Part 1, which included the Urban Design Framework and the Goals and Policies, was released for public review in January 2013. The Working Draft Part 2, which included the Comprehensive Plan Map and the Citywide Systems Plan, was released for public review in October 2013.

Informed by public feedback and additional analysis, the Proposed Draft was developed by staff, published in July 2014, and circulated for broad public review. Formal testimony was invited for during a nine-month period (July 2014 through March 2015). Testimony was received in person (at public hearings), in writing (via email and letters), and through an interactive online map application (the Map App). More than 4,000 comments were received and considered by staff and the Planning and Sustainability Commission (PSC).

The subsequent Recommended Draft included all changes to the Proposed Draft approved and recommended by the Planning and Sustainability Commission between July 2014 and June 2015. This draft was published in August 2015. After receiving the PSC recommendation, City Council held five public hearings in late 2015 and early 2016. Again, more than 4,000 comments were received, which were considered by the City Council. In February 2016, City Council identified potential amendments they wanted to discuss and scheduled several public hearings in April of 2016 to hear public testimony about the amendments.

City Council voted on amendments to the PSC recommendation in late April and May and adopted the 2035 Comprehensive Plan in June 2016.

The final step in the state‐required Periodic Review process is updating City codes and zoning maps to be consistent with the new Comprehensive Plan. This step was completed in December 2016.

After adoption at the City level, Portland officials notified the state of Oregon and requested that the state review the plan for conformance with statewide planning goals. The Oregon Department of Land Conservation and Development (DLCD) approved the plan in late 2017. That decision was subsequently appealed to the Land Conservation and Development Commission (LCDC), which rejected all appeals in a March 2018 meeting.

To allow enough time for state acknowledgement, Portland City Council established an effective date of Jan. 1, 2018. That date was later changed to May 24, 2018.

The 2035 Comprehensive Plan is a long‐range plan to guide land use decisions for a generation. Given the breadth of the plan, its long‐term planning horizon, and the amount of work required to update the plan’s components, the full Comprehensive Plan is updated only periodically (thus, “periodic review”).

However, it is often necessary to update portions of the plan or create more focused area plans. When smaller updates are completed or area plans like the Central City 2035 Plan are completed, they must be adopted as “post‐acknowledgment plan amendments.”

How the Comprehensive Plan relates to other plans

The Comprehensive Plan is part of a family of state, regional, and local plans. Some, like Oregon’s Statewide Planning Goals and Metro 2040, set the overall planning framework and guide the content of the plan. Others, (topic‐ and area‐specific plans) provide more detailed information about individual topics or smaller parts of the city.

Metro is the Portland metropolitan area’s regional government. Portland’s Comprehensive Plan must be consistent with regional plans and implementing regulations established by Metro, including:

Cities and counties within Metro’s boundaries must be consistent with Metro’s adopted plans, per Metro’s charter and state law. However, these plans do not dictate how cities accommodate growth and development.

Portland must figure out where to locate housing and how to create a fertile and sustainable economy, while protecting natural resources. It is the City’s responsibility to guide the its shape and development. The Comprehensive Plan is one way that the City of Portland is complying with the applicable Metro plans.

In addition to the Statewide Planning Program and the regional planning program, Portland develops and adopts many plans of its own.

Area‐specific plans – The Comprehensive Plan is a land use and public infrastructure plan for the whole city; area‐specific planning efforts take place for a smaller part of the city. Planning for smaller geographies — like a district of the city or the neighborhoods along a transit line — provides an opportunity to explore issues at a finer scale and with the local community.

This level of planning is often called “community” or “neighborhood planning.” Area‐specific plans contain many components, such as information about the area’s history and community, vision statements, policies, code amendments, land use or zoning map changes, as well as action plans. All these components must comply with the Comprehensive Plan in effect at the time the area plan is developed. The components of area‐specific plans either can be adopted by ordinance or resolution. They can also result in an amendment to the Comprehensive Plan or its implementation tools.

How area‐specific plans relate to the Comprehensive Plan