Portland’s main wastewater treatment plant will be closed to tours until after Environmental Services completes a major upgrade and expansion project at the plant. Learn more about the Secondary Treatment Expansion Program underway now.

Just in time for Earth Day, Environmental Services is announcing a groundbreaking project that will convert waste methane from the city’s sewage treatment process into renewable natural gas. The clean, locally-produced fuel will be sold in Portland and elsewhere to replace diesel fuel in trucks.

The project will cut greenhouse gas emissions by 21,000 tons a year, more than any other single city project to date.

It also will generate upwards of $3 million in revenue a year, and replace 1.34 million gallons of dirty diesel fuel with clean renewable natural gas. That’s enough to run 154 garbage trucks for a year.

“We are creating a triple-win for the public in terms of revenue, climate action and cleaner air,” said Commissioner Nick Fish. “The renewable natural gas we will produce is truly local and homegrown, a by-product of the waste from every Portland household that we can now repurpose.”

Portland City Council today unanimously approved the project, authorizing Environmental Services to build the infrastructure needed to produce renewable natural gas (RNG) at the Columbia Boulevard Wastewater Treatment Plant and distribute it through NW Natural’s network. City Council also authorized the construction of an RNG fueling station at the plant. The $12 million package of construction costs will have a payback period of about four years. 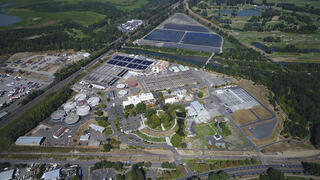 The timeframe for the project is:

By the end of 2017, the fueling station is scheduled to be finished and used for Environmental Services' and other city trucks.

By the end of 2018, Environmental Services expects to begin feeding renewable natural gas into NW Natural’s network. That fuel will be sold on the renewable energy market via a system of energy credits to Oregon and out-of-state buyers.

“Because our product is a renewable fuel and not a fossil fuel, it commands a five-to-ten times higher price on the renewable energy market,” said Environmental Services Director Mike Jordan. “Doing the right thing turns out to be a great deal.”

NW Natural provided engineering standards and developed a regulatory framework to facilitate this project. “We are proud to be a part of our city’s efforts to close the loop on waste,” said David H. Anderson, NW Natural president and CEO. “We look forward to this being the first of many renewable natural gas projects that move us toward a low-carbon future.” 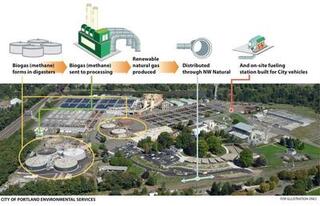 The project is the latest step Environmental Services is taking at the treatment plant to recover and reuse as many resources as possible. About half of the plant’s waste methane, in the form of raw biogas (a mixture of methane, carbon dioxide and trace components) is already reclaimed to heat and power the treatment plant. Some has been sold to a local roofing company. The rest, about 23 percent, has been flared (burned and released as carbon dioxide into the atmosphere). This project will move the plant to 100 percent methane recovery for both on-site use and sale, and eliminate regular flaring.

"We have found a way to eliminate that pollution and turn it into revenue for Portland ratepayers," said Commissioner Nick Fish. “That’s a good way to begin Earth Day celebrations.”

Find more information and updates on the project.