To find information not yet moved, visit the Environmental Services pages on portlandoregon.gov. BES employees may also visit the BES Employee Site. 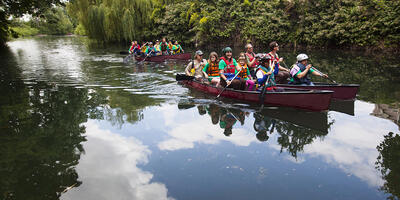 The Columbia Slough watershed includes roughly 32,700 acres. It encompasses land and waterways in north and northeast Portland, Gresham, Fairview, Wood Village, and Maywood Park. The slough watershed supports a wide range of wildlife, some of which are found nowhere else in Portland.
On this page

About the Columbia Slough Watershed

The Columbia Slough is a slow moving and easy-to-canoe waterway. Its 20-plus miles of channels are home to river otters, painted turtles, and bald eagles. It also supports 170,000 residents and 4,200 businesses. Its source is in Fairview, Oregon. From there, the Columbia Slough meanders west through Gresham and Portland to the Willamette River.

The watershed is the homeland of the Upper Chinook Native people. They used sophisticated land stewarding systems to coexist with nature. Indigenous people fished, hunted, and found food in this watershed. They also protected the slough’s rich and productive waterways, wetlands, and uplands.

White settlers altered the watershed to accommodate industry, transportation, and agriculture. Beginning in 1918, landowners along the slough formed three drainage districts to control floods. To make space for development, they filled and diverted wetlands, streams, and side channels. This resulted in a major loss of wetlands, floodplains, and forests for the region.

Despite the last century’s changes, the slough remains a “Jewel of Portland.” Its watershed provides important habitat for fish and wildlife, including several endangered species. The upper reaches of the slough, including much of northeast Portland, are part of the Columbia South Shore Well Field and Well Protection Area, from where Portland draws groundwater as a supplementary source of drinking water.

How the Watershed Is Doing Today

There is room for improvement, as the most recent report card indicates. In 2019, the Columbia Slough watershed received the following marks:

Investments over the last 20 years have improved the Columbia Slough’s water quality. Under the Clean Water Act, the City made improvements to better manage sewage and reduce industrial pollution to the slough. Today, it is a good place to explore nature by foot, canoe, or kayak.

Combined sewer overflows to the slough have been reduced to almost zero per year starting in 2000 as part of the Big Pipe project. We continue to maintain pump stations to provide sanitary service and protect the slough. Projects to abandon septic tanks and cesspools have reduced E. coli and nitrogen. Dissolved oxygen levels have improved due to Port of Portland changes in de-icing chemicals on airport runways.

Find more information about previous projects along the slough on our restoration and monitoring map.

We are actively working to protect and restore the health of the Columbia Slough watershed.

More than 100 years of industrial, agricultural, and urban activities throughout the Columbia Slough watershed have led to low-level, widespread sediment contamination. Historic pollutants include polychlorinated biphenyls (PCBs), pesticides, and other pollutants including metals and petroleum compounds remain in the sediment at levels that pose unacceptable risk to human health and wildlife, especially for those eating fish caught in the slough. Find recommendations for ways to reduce risk from eating fish from the Columbia Slough.

Environmental Services works closely with the Oregon Department of Environmental Quality to document continued improvements in the watershed’s health. Stormwater treatment in the slough watershed remains a priority.

Environmental Services continues to repair and replace critical infrastructure in the slough watershed. When it rains, stormwater flows over streets, picking up pollutants along the way. That water flows into the City’s stormwater pipes that carry that pollution to the slough. We are working in several Columbia Slough neighborhoods including Portsmouth, Kenton, Woodlawn, Parkrose, and Argay Terrace on projects to filter pollutants from stormwater before it heads to the slough. One such project is the Columbia Slough Outfall 57 Stormwater Project, currently in design.

Wetlands are an important part of the Columbia Slough watershed because they provide important functions like filtering pollutants out of stormwater, increasing flood storage, and providing food and habitat for wildlife. We’re making improvements to slough wetlands in the East Columbia and Kenton neighborhoods, including adding native plants and reducing unwanted weeds while limiting the use of herbicides or chemicals.

We will continue to work to improve water, sediment, and habitat quality. Our future work will:

Find information on all of our current projects that are working to protect and improve watershed health.

Despite its reduced and altered habitats, the Columbia Slough watershed supports a wide range of wildlife, some of which are found nowhere else in Portland.

The slough has the highest percentage of non-native fish in city streams: 28 percent of the fish captured in fish studies were non-native. However, the three most abundant species (threespine stickleback, largescale sucker, and prickly sculpin) are native, and some of the highest numbers of Chinook salmon in city streams are captured in the lower slough. Goldfish, pumpkinseed, common carp, and yellow perch are the most commonly captured non-native fish.

The slough's bird life is a study in contrasts. Degraded slough banks host few native species and abundant non-native species, while a preserved natural area like Smith and Bybee Wetlands attracts the most bird species in the entire city. Look and listen carefully along waterbodies and you may spot colorful black-headed grosbeaks and yellow warblers in cottonwoods and willows. Great blue herons can be seen flying overhead just about anywhere, and bald eagle nests are increasing along the Columbia River.

Portland's only endangered bird, the streaked horned lark, lives in wide open fields at and around Portland International Airport. The “parasitic” brown-headed cowbird is prevalent in the slough. Females sneak up on other birds’ nest, lay their eggs, and then take off. The new parents are left to raise the chicks when they hatch.

How to Experience the Columbia Slough Watershed

This printable guide to the watershed in English or Spanish provides a history and map of the many places you can hike, bike, canoe, or watch birds along the slough.

Paddling might be the best way to see the slough and its wildlife. This printable guide provides launch sites and shows places where culverts make portages necessary.

How to Get Involved