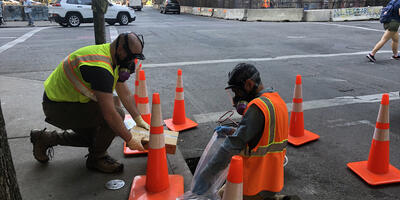 Update:  Environmental Services in the fall installed liners in storm drains around the Justice Center and ICE building in South Waterfront - two areas of the city where storm drains lead to the Willamette River. The liners add an additional layer of protection to prevent pollutants from reaching the river. Environmental Services will continue to inspect, monitor, and maintain the liners as long as they are needed.

Sampling results also showed that contaminant levels dropped to within a normal range before reaching the Willamette River, the City’s stormwater and sewer agency announced today.

Environmental Services provided the information in a report to the Department of Environmental Quality, giving a snapshot of how CS gas residue and related chemicals mixed with general road debris to travel through City pipes towards the river.

“While pollutant levels that enter the Willamette River are thankfully low, the City is concerned about any and all additional pollution loads to the river that Portlanders love and continue to work hard to restore,” said Bureau Director Mike Jordan. “We will use this report to work with DEQ on additional steps for the downtown core and elsewhere in the city to address CS gas residue.”

“It’s good news tear gas and pepper spray residues were at normal levels where Portland’s storm drains reach the Willamette River,” said Portland Mayor Ted Wheeler. “That said, the risk tear gas and pepper spray create for our health, our environment and our ability to focus on ending systemic racism are too great. That’s why I announced earlier today an executive order banning the use of tear gas for crowd dispersal. We all need to help reduce the violence. That starts with an end to the use of tear gas for crowd control.”

At the direction of DEQ, Environmental Services sampled for 12 contaminants. Those include metals such as zinc, copper, and lead that are found in crowd dispersal products but also are commonly found in stormwater from motor vehicle brake pads, roof runoff, and other urban sources. Researchers also tested for barium, perchlorate, and hexavalent chromium, substances found in CS gas but are far less common in stormwater.

Environmental Services found elevated levels of barium, copper, lead, and zinc at the federal courthouse site, with levels of all four metals dropping before reaching the river.

Additional sediment sampling at six storm drains also showed higher levels at the federal courthouse than at the control site outside the protest zone.

After sampling, Environmental Services also cleaned out the six storm drains in an effort to prevent those pollutants from reaching the river.

Federal officials so far have denied access to the bureau to inspect and clean out a seventh storm drain, which is behind a fence erected illegally around the perimeter of the courthouse.

Because of that, the bureau today is taking enforcement action against the federal General Services Administration, which manages the courthouse and other federal buildings. The bureau is notifying the agency that it was in violation of City code and assessing a $20,000 penalty. The enforcement action orders the agency to move the fence by Monday so the City can access the storm drain. If the fence is not removed by Monday, Environmental Services will start assessing additional penalties of $20,000 daily.

The General Services Administration has been responsive to the City’s direction to change cleaning practices to capture contaminants instead of washing them into the street and storm drains.

In addition, Environmental Services is waiting for information on chemicals deployed in August from the Department of Homeland Security. As part of its research, the City’s sewer and stormwater utility asked for CS gas and related data from both Portland Police and federal agents. It received information from Portland Police. No information has been received to date from DHS. DHS said this week it intends to provide information soon.

The City of Portland Bureau of Environmental Services - your sewer and stormwater utility - provides Portland residents with programs to protect water quality and public health, including wastewater collection and treatment, sewer construction and maintenance, stormwater management, and stream and watershed restoration. Follow on Twitter - @BESPortland.