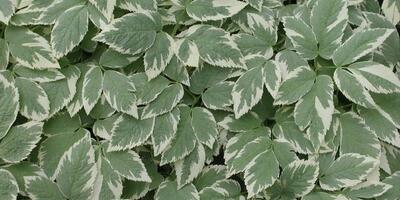 Goutweed is a species of concern known for filling in garden spaces and for being very hard to control. Its sale is prohibited in several New England states and has been noted as invasive throughout the East Coast, Midwest, and Pacific Northwest.
On this page

Why Are We Concerned?

Goutweed is known to form dense patches of perennial plants. Its resistance to management increases concerns, as well. Goutweed infestations may lead to:

How Does It Spread?

Goutweed is thought to spread primarily by root expansion but may also be able to spread by seed. It is well-known in landscaping, and variegated (white-edged) specimens are common. Goutweed seeds are moved by:

Goutweed creates a low cover of leaves composed of generally three leaflets. Lower leaflets often have a mitten shape. Landscape varieties often have white on the edges of leaves, though these varieties may revert to all-green leaves.

Are There Any Look-alikes?

Goutweed looks vaguely like many of the herbaceous species found under forest canopy in the Pacific Northwest. Sweet cicely (Osmorhiza chilensis) has similar foliage and Pacific waterleaf (Hydrophyllum tenuipes) forms similar groundcover. Goutweed flowers, however, are in larger clusters than sweet cicely, while goutweed leaves are obviously three-part, as opposed to waterleaf or many other lookalikes.

How do we deal with it?

How can folks help?

Goutweed is not a species that the city is currently managing. Private property holders are, however, strongly encouraged to manage and properly dispose of goutweed.